In the Land of Holly: Wreath-Making in Southern Delaware

By Secrets of the Eastern ShoreNovember 25, 2020December 7th, 2021One Comment

Home / Way Back Machine / In the Land of Holly: Wreath-Making in Southern Delaware

NOTE: This is an excerpt from my book, “You Wouldn’t Believe! 44 Strange and Wondrous Delmarva Tales.”You can find more information on the book and how and where to buy it here.

When you venture into Southern Delaware during the Christmas season, you are wandering a landscape once known far and wide as the “Land of Holly.” That nickname is a distant memory now, but the story behind it is an all-American farmland affair through and through, filled with homespun ingenuity, old-fashioned resourcefulness, and entrepreneurial creativity.
The story of that “Land of Holly” begins in the tiny town of Farmington, near Milford. Just over 100 folks live there today, but its population was triple that in the late 1800s, when it was a bustling place with multiple canneries and fruit-evaporating plants.

Families in Sussex and Kent counties had long engaged in the holiday tradition of gathering twigs from holly trees, with their bright red berries and shiny green leaves, to add a little holiday cheer to their homes. In 1890, Farmingtonian William Buell got the idea of turning that tradition into a side hustle. He harvested wagonloads of those twigs and packed them up into 3,000 crates, each one measuring five feet long and three feet deep. They proved quite popular with big-city customers in New York, Philadelphia, and Chicago, where folks bought them up and spun them into wreaths.

The holly hustle really took off starting in 1898, when a man working for Buell, John T. Watson, suggested shipping ready-to-hang wreaths instead of twigs. This involved having local craftspeople wrap holly branches around switches of pliable sweetgum wood. Buell and Watson tested the idea with a small shipment to a New York seed firm. The next year, they were inundated with orders—according to one account, in the thousands. By 1900 the pair was shipping 5,000 crates filled with finished wreaths as Christmas approached.

Enter the “The Holly Wreath Man”

Buell’s neighbors took note of his success. Even small-fry farm families wanted to get in on the act. Mothers and children began crafting holly wreaths in their kitchens. Henry and Eunice Burton ran a general store in downtown Milton, where they decided to let local families trade homemade holly wreaths for staples like eggs and milk. Then they marked up the wreaths and sold them to big-city vendors.

Everything shifted into another gear after the Burtons’ daughter, Virginia, fell in love with Charles G. Jones—they were married in 1904. Jones soon set about transforming himself into “The Holly Wreath Man.” Virginia had her doubts at first. In fact, she feared her new husband was nuts when he dropped $500 hard-earned dollars on postage for promotional materials hawking natural wreaths from the “Land of Holly.”

Charles turned a cool $360 profit in that first year. He was a brilliant marketer. Every crate he shipped was stamped with colorful labels bragging that the contents came “From the Land of Holly.” His slogan was, “Quality is Remembered When Price Is Forgotten.” Largely because of Jones, Milton earned the nickname of “Hollytown, USA.” Local folks soon came up with a name for all the extra train cars that started rolling through town in November and December—“The Holly Express.” By this point, the holly-wreath-making industry had spread throughout lower Delaware and moved into Maryland and Virginia as well.

From Seasonal Greens to Real Money

Fast forward to 1936. In the midst of the Great Depression, Southern Delawareans shipped 2 million Christmas wreaths. The way it worked was a kind of prehistoric version of our modern-day gig economy, with scads of different ways for locals to make a buck in the holly trade. Some families transformed farmhouse kitchens into wreath-making stations. Others were solo artists: One woman, Mary Figgs of Millsboro, earned regional renown for her ability to churn out 100 wreaths a day despite a disability—she had only one arm. 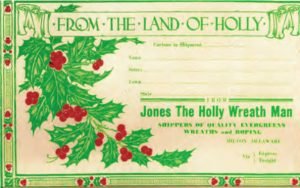 Still other families took a more focused approach. They ventured into swamplands full of holly to gather raw materials, then sold those twigs and branches to wreath makers like Mrs. Figgs. On other farms, entire barns were cleared out so that hired hands could work out of makeshift wreath-making factories. Every store around carried wreath-making wire, the only non-natural store-bought ingredient in Delaware’s holly wreaths. It was nearly as thin as sewing thread.

The Wilmington News Journal, Nov. 27, 1934: Hundreds of farmers and their wives and children are taking to the woods this week, gathering holly branches from which to make wreaths for window decorations in the city homes and department stores in New York, Philadelphia, Chicago, Boston, Baltimore, and other places. … During the day the farmer and his boys go into the wood and cut the branches from the trees and carry them home to the womenfolk, who make them into beautiful window decorations.

In a 2019 Delaware Wave article on this topic, the historian Mike Morgan shared these three tidbits from the Delaware Coast News on Dec. 7, 1929:
• One could see automobiles going north with holly in bulk and wreaths piled high on the back seat. …
• Sometimes when so many of the farmer’s crops have been a failure, instead of giving up in despair, he plods along slowly, looking forward to the holly season to pull him out of his financial troubles. …
• Excuses are sent to the schools that the children are needed to help with the wreath-making.

Like in any business, there were good years and bad ones. Years with early frosts brought supply-side problems, as berries could be quite hard to find. Other years saw demand-side problems linked to the economic ups and downs in big cities.
Another problem arose courtesy of newcomers to the business who didn’t know what they were doing. They would cut branches in the wrong spot and in the wrong way, hindering the regrowth of new twigs in succeeding years. The state’s forestry office got in on the act, doling out instructions and pleading with people to cut smaller branches, not larger ones. Sloppy harvesting, those experts warned, could put at risk “the green forest goose that lays the golden Christmas egg.” 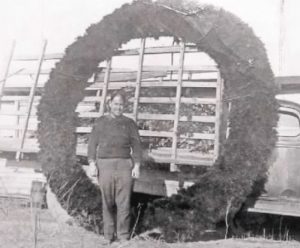 W.T. Jones with his record-setting wreath

In 1939, Delaware state legislators passed a law declaring the holly the state’s official tree. No wonder: The U.S. Department of Agriculture around that time estimated that some 15,000 people were engaged in the holly trade, earning a combined $450,000. A single family, working hard for weeks on end, could pick up $500 or more in “Christmas money.”

Charles G. Jones died in 1944. But his son W.T. Jones stepped right into his late father’s marketing-maven shoes. In 1951 the younger Jones made the world’s largest-ever holly wreath. It had a diameter of 11.5 feet. It had to be shipped in pieces and bolted back together when it got to New York City, where it hung to much hullabaloo outside of Radio City Music Hall.

The Wilmington News Journal, Dec. 5, 1946: Sussex farmers again this autumn have been making wreaths, finding it not only a profitable on-the-side pastime but also one that gives them the material satisfaction and pleasure of knowing their handiwork will enhance the Christmas festivity in many homes [all] over the land. With their green leaves speaking of life, of growing things, of man’s toil and his harvest; and the red berries—of the fire on the hearth, the lights in the windows, and the warmth in human souls, the wreaths comprise perfect tokens of the holiday most dear to all. Wherever they are hung they denote faith, peace, kindness, and goodwill—the true spirit of Christmas.

The ‘Land of Holly’ Becomes a Ghost of Christmas Past

Things started going south for the holly wreath game in the 1950s when quality artificial wreaths came on the market. Some of them were made in Delaware, ironically. Fake wreaths were a hit with big-city department stores and other commercial customers, as they could put them up earlier and let them hang for longer periods without worrying about wilting and spoilage.

Other factors played a role in the decline as well. As forest lands were cut to make room for new houses and farm fields, holly trees got harder to find. Changes in the economy gave younger women more and different opportunities in the workplace. Fewer and fewer of them chose to keep up the holly traditions they had learned from their mothers. 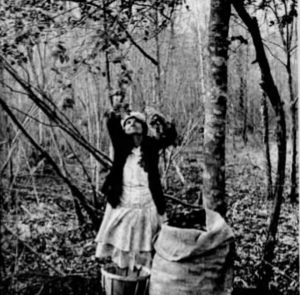 Perhaps the final nail in the coffin came in the mid-1950s when the U.S. Department of Labor imposed a new minimum wage of $1 an hour and ruled that it applied even to home-based workers. The one-size-fits-all federal rule wreaked havoc in a gig- economy-style holly game in which farm families had a dozen different ways from Sunday to make a buck. Suddenly, federal bureaucrats proclaimed that there was only one way to make a buck—as an official “employee” who received official “wages” in accord with proper payroll and tax-reporting protocols. In the years that followed, Delaware Senator J. Allen Frear introduced legislation in Congress several times seeking to carve out an ex- emption from these rules for the Delaware holly-wreath market. It never passed.

Things got so bad that the feds even came after the “Holly Wreath Man” himself, accusing W.T. Jones of failing to pay minimum wage. Jones was eventually vindicated, but between a shutdown of operations for one year and the expensive ordeal of proving his innocence, Jones ended up deep in debt. He closed his holly business. He ran an auto parts store in his later years.

Later, he would recall the year the feds shut him down this way:
[It] was like stopping Santa Claus on Christmas Eve.

By the time Jones died in 1997 at the age of 83, the holly industry was long gone. Back in 1965, a Salisbury Daily Times reporter had issued a spot-on prediction:
Like cranberry chains and popcorn balls, the holly wreath may soon join the ghosts of Christmas past.

In an unsigned editorial in 1966, the Daily Times celebrated the economic trade-off at the heart of the holly-trade tradition:
Urban folks bought themselves a genuine touch of the country for the Christmas season. The country folks earned extra money with which to buy holiday things, some of them from the city.

The piece finished on this sad note:
Perhaps families are not what they used to be and no longer do enough of them gather in a common effort such as wreath- making. … It’s sad to contemplate the likelihood that as some future holiday season approaches, an Eastern Shore tradition will have passed on.

The legacy of the holly industry does live on, actually, but only in fits and starts Local historical societies have put up exhibits about it. Libraries have brought in guest speakers to reminisce about the good ol’ holly days. Senior centers have put on wreath-making sessions to remind residents about their childhood joys. A historic marker in Milton Memorial Park honors “The Holly Industry.” Another marker stands in front of the home of the original “Holly Wreath Man,” Charles Jones. Also in Milton, there is an annual Holly Festival at Christmastime.

• Here again is the link where you can to find info on the book this comes from–You Wouldn’t Believe! 44 Strange & Wondrous Delmarva Tales.

• The photo up top here of people making holly wreaths is in the collection of the Delaware Archives.