By Secrets of the Eastern ShoreNovember 25, 2020No Comments

Back in 2004 the writer Brice Stump made the most of a priceless opportunity. While working for the Salisbury Daily Times, he got to join a pair of elderly siblings from Atlantic, Va. as they relived old family memories by sitting around the kitchen table and making a holly wreath in the old-school way.

Norman Davis, then 85, and Leuvenia Watson, then 84, had spent many December nights in their childhood years making such wreaths. They were among the hundreds of families on the Eastern Shore of Virginia who made a few extra bucks around Christmastime that way. Their mother, Viola, would sell the finished products either to a local dealer or at the big wreath auction held for many years up the road in Fruitland, Md. From those local points, wreaths crafted by the Davises would head off to big-city markets, where they were used as holiday decor on front doors, in stores and businesses, and on the graves of loved ones.

OUT INTO THE ‘BITING WIND’

By the time Stump wrote this story, Davis and Watson ranked as survivors from a family that once numbered “eight head,” five boys and three girls. As they got to work crafting a wreath that evening, the memories came flooding back.

“They remembered the aroma of seasoned wood snapping, crackling as it burned in the woodstove, and the kitchen’s deep warm comfortable heat, which thawed their numb fingers, noses, and ears after hauling sacks of holly miles down country roads.”

The hard work began long before those kitchen-table sessions got under way. In after-school hours, Davis and his siblings would venture out after school, into the “biting wind” of the season. Sometimes he drove a “hoss” cart. Other times he went on foot. Sometimes he traveled several miles, into Temperanceville, in search of the best holly trees. Often, those trees were on private land, and the young boys had to work up the courage to ask local landowners for permission to “harvest” some holly trees. Almost always, the answer was yes:

“It took a cold, hard heart to say no to a family of eight poor children,” Davis recalled.

In the woods, Davis’s job was to get up and saw branches from near top of the trees, which is where the best limbs could be found. Down on the ground, other family members would cut up the twigs and stuff clusters of leaves into burlap bags.

Often, the Davis clan worked with a white neighbor, Miss Mae Fleming. The Davis boys would saw limbs and cart supplies out of the forest and over to their neighbor’s home.

“She didn’t pay us, [and] we never charged her,” Davis said. “Miss Fleming was poor like us, too, a nice woman.”

‘SHE BROUGHT US UP TO WORK’

Back in that warm kitchen, the family would work until 11pm five nights a week. Each child had a nightly quota of wreaths to make. Davis told Stump that he was a slow wreath maker, describing how he would trim berries which had been cut from small branches and work the decor onto a hoop made from fox grapevine, switch maple, or gum saplings. The finishing touch was a run of thin wire to hold everything together. One night he was standing at the table making a wreath when exhaustion got the best of him. “[I] started nodding and fell right down on the floor I got so sleepy.” 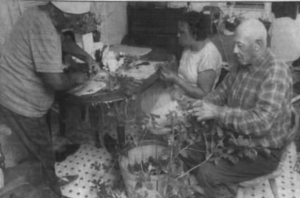 His mother was a tough taskmaster. She “brought us up to work, and we done whatever she said to do,” Davis said. There was another time when Davis was “sittin’ at the table makin’ like I was asleep, but mom said, ‘You can sleep if you want to but you’re still makin’ that wreath.'”

The way Davis and Watson remembered it, the family would make about 200 wreaths in a season. Prices fluctuated wildly depending on the year. Davis remembers one year when the going rate was 35 cents a wreath. That $70 in proceeds “wasn’t a whole lot of money,” Davis said, “… but it was better than starvation. It was enough to help us get by.”

Viola Davis used the money to buy food, mostly. She might also buy “one or two presents.” On Christmas, the stockings that hung in the Davis home contained modest little items.

“Might be an apple, a piece of candy, or an orange,” Davis recalled. “That be about all, a special treat.”

OFF TO THE FRUITLAND MARKET

Finished wreaths were stored briefly in an icehouse to keep cool. At first, the family loaded wreaths into a “hoss or mule cart,” taking them into town to sell to Atlantic shopkeeper J.K. Mears. Later, they stuffed the family car with wreaths and drove to the auction in Fruitland. 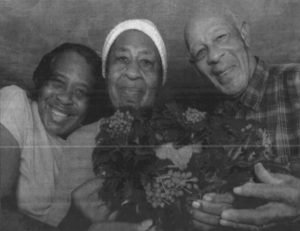 Wreath making died out as a local tradition in the 1950s and 1960s. There were many factors involved, including the arrival of artificial wreaths that lasted longer than the homemade variety. The Fruitland auction ran out of gas in the late 1960s. The Davises sold a few wreaths out of their home in the years that followed, but the writing was on the wall.

“We made them as long as they took ’em,” Watson said.

Stump summed up his memorable night of reporting on this local tradition this way:

As Davis and Watson made a holly wreath all these years later, it “brought back a lifetime of memories. [Though it was just the two of them and Watson’s daughter in the room,] it seemed the whole family was once more in the light of a kerosene lantern, warmed by the woodstove, talking and laughing as vines, leaves, and berries were shaped into circles of art.”

–written and posted by Jim Duffy on Nov. 23, 2020 for Secrets of the Eastern Shore/Whimbrel Creations LLC. All rights reserved.

NOTES:
• Brice Stump’s story was published in the Daily Times on Dec. 12, 2004. The photos you see here were taken by the author.
• I have long been an admirer of Mr. Stump’s work. You can find information about some of the books he has written here.
• There are two other stories about Delmarva holly-wreath-making traditions on this site. One is set in Delaware–read it here. The other is set in Maryland–read it here.