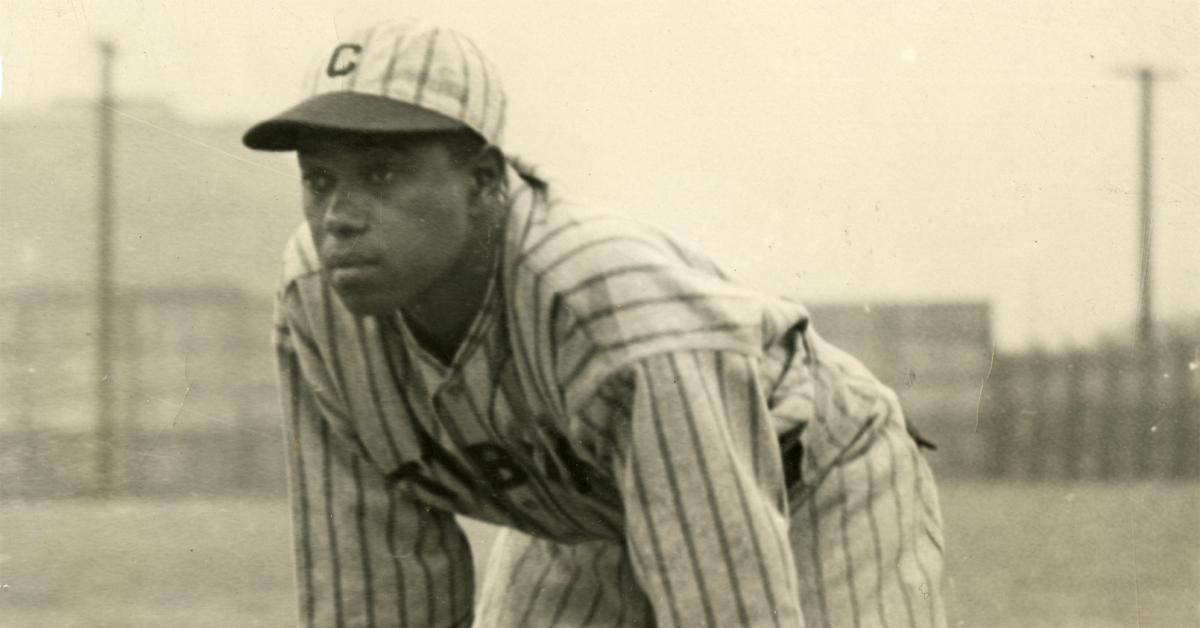 Clutch: That’s the word that pops up when baseball people talk about how Judy Johnson earned his place among the game’s all-time greats. Johnson wasn’t particularly strong, or fast, or powerful. He stood less than 6 feet tall and weighed less than 150 pounds. There was nothing flashy about his style.

But “no one would drive in as many clutch runs as he would,” said James “Cool Papa” Bell, a fellow Hall of Famer from the old Negro Leagues. “No matter how much the pressure, … Judy could do it when it counted.” Johnson was as clutch in the field as he was with a bat. Baseball aficionados who saw him play third base always seemed to use Brooks Robinson as a point of comparison.

Johnson is a Delmarva product through and through. He was born in 1899 either in Snow Hill, on Maryland’s Eastern Shore, or in the surrounding countryside. He was raised in Delaware, which remained his home base all the way through to his death at the age of 90.

He entered the world with the given name of William Julius Johnson. Not much is known about his early years. According to family legend, his mother, “Miss Annie,” had been abandoned as an infant and left on a doorstep, presumably somewhere in or around Snow Hill. In his later years, Johnson shared memories about how he and his sister, Mary Emma, would climb up a ladder at bedtime to sleep in a chilly loft. They would wake the next morning to the smell of a country breakfast wafting up from the main floor.

Johnson’s father, William Henry, worked as some sort of sailor in those Snow Hill years. He was a passionate boxing fan, too. Another family legend has it that William Henry was good friends with Jack Johnson, the first black man to become heavyweight champion of the world. A gold ring that was a gift from the famed boxer ranked as cherished family heirloom for many decades.

Young Judy was less than 10 when the Johnsons moved to Wilmington, Del. William Henry worked in the shipyards there for a while. Eventually, he would become a boxing instructor and then athletic director at a facility called the Negro Settlement House. I haven’t been able to find many details yet about where that Settlement House was or how it operated.

Here is one joyous day to imagine in the life of young Judy Johnson and his family. On July 4, 1910, his father’s friend Jack Johnson successfully defended his heavyweight title against “The Great White Hope” James Jeffries. In black communities around the country, the results inspired jubilant residents to organize spontaneous parades and hold raucous prayer meetings. (Alas, the outcome of that fight also sparked violence and tragedy. At least 20 people died and hundreds more were injured in “race riots” that broke out in cities and towns around the country.) 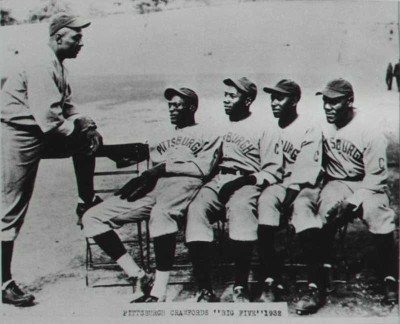 Judy’s father wanted his son to become a boxer, just like Jack Johnson. In the absence of a proper sparring partner, he forced Judy to practice fighting against his sister. That didn’t go very well. Mary Emma was happy to do her part, but Judy could never bring himself to hit her back. Asked about this many years later, he said only, “Where do you hit a girl?”

Judy fell in love with baseball instead. He never forgot the first time he got to put on a real uniform: “I was strutting around [wearing that uniform] at 5 a. m., even though we didn’t play until two in the afternoon.”

As a teenager, he played for local teams—the Rosedale Blues and the Madison Stars among them. It was while playing for the Blues that Judy fell in love with Anita Irons, the sister of a teammate. The young couple would sit together on a bench out front of Anita’s house, chatting for whole evenings at a time.

The visits would end when Anita’s father coughed loudly from inside the house. As Johnson later recalled:

The two would eventually spend 60 years together as husband and wife.

Judy Johnson makes it to the big leagues

Judy dropped out of Howard High School, following at first in his father’s footsteps by finding work in local shipyards. His baseball break came in part because of his skills, but also because of World War I. With so many older men serving in the military, the semi-pro Bacharach Giants out of Atlantic City, New Jersey needed fresh blood and signed young Johnson to a contract that paid him $5 a game.

By the early 1920s, he was making $125 a month with the big-league Hilldale Daisies, who played in Philadelphia. Johnson’s teammates on the Daisies gave him the nickname “Judy,” because of his resemblance to another Negro League star, Judy Gans.

The 1920s were the prime of Johnson’s career. In the 1924 Negro World Series against the Kansas City Monarchs, Johnson hit a dramatic three-run, inside-the-park home run in the ninth inning to win game five of a 10-game series. The Daisies eventually lost that series, 5-4-1, but they would go on to win a rematch the following year. 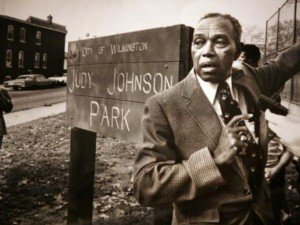 Johnson hit for a .392 average in that championship season. The Daisies rewarded him with a raise that amounted to $10 a month. That winter, Johnson joined a number of other black baseball stars in Palm Beach, Florida, where two rival hotels hired their own “teams” of athletes to wait on tables by day and then play games by night for the entertainment of their white guests.

The Great Depression wreaked havoc on many Negro League teams. The Hilldale Daisies folded altogether, and Johnson joined the Pittsburgh-based Homestead Grays as player/manager. During one game on July 25, 1930 the Grays ran out of catchers after a rash of injuries, and Johnson was in quite a bind. But there was a young man in the stands watching the game as a fan that Johnson recognized. He had seen the kid play catcher in semi-pro games. In fact, he had urged the Grays to sign the kid to a contract.

Now, Johnson called the young man out of the stands to fill in for the Grays. That launched the career of Josh Gibson, now known in baseball history books as “The Black Babe Ruth.”

In 1932, Johnson and Gibson both joined the Pittsburgh Crawfords as part of a team that has often been described as the Negro League version of the powerhouse 1927 New York Yankees of the white major leagues. Johnson stayed with the Crawfords into 1937. He retired shortly after getting traded away by the team during that season. (The photo here with five players is “The Big Five” stars of the Pittsburgh Crawfords in the 1930s. From left: Oscar Charleston, Ted Page, Josh Gibson, Judy Johnson, and Jud Wilson.)

In retirement back in Wilmington, Johnson ran a general store with a family member and also worked for the Continental Cab Company. In 1954, he began working as a coach and scout for the Philadelphia Athletics. He famously recommended that they sign a talented young man named Henry Aaron. It didn’t work out:

I got my boss out of bed and told him I had a good prospect and he would not cost too much. My boss cussed me out and said $3,500 was too much money.

Johnson eventually switched over to the Phillies after the A’s moved away. His most famous signing was Dick Allen, who developed an all-star first baseman (and who just so happened to be one of my favorite players as a child while following the Chicago White Sox—when he came up to bat, the organist used to play “Jesus Christ Superstar”). 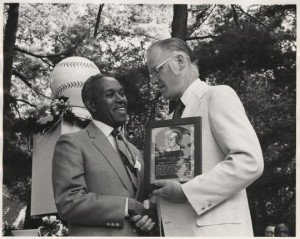 In 1975, Judy Johnson became just the sixth black player inducted into baseball’s Hall of Fame. His famed calmness under pressure deserted him on the day of his induction ceremony, however. Johnson broke down in tears and walked off the stage, unable to deliver a proper acceptance speech beyond muttering, “God bless you all” and a few other words. (The photo here of an older Johnson is from the day of his induction into the Hall of Fame. That’s baseball commissioner Bowie Kuhn holding the plaque.)

In his later years, Johnson often welcomed reporters and researchers into his Wilmington home, where he would hold court about the old Negro League days. He and Anita lived for most of their married life in a house at 3701 Kiamensi Avenue in the Marshallton neighborhood. The home is now on the National Register of Historic Places. Johnson died on June 15, 1989.

There are a couple of other places in Wilmington where you can go to get in touch with Johnson’s legacy.

• A statue of Johnson, poised in his fielder’s crouch, stands outside of Frawley Stadium in Wilmington. That’s where the minor league Blue Rocks play.

• Judy Johnson Memorial Park is located between west 2nd and 3rd Streets and between south Dupont and Clayton streets. There is a photo here of an older Judy Johnson attending a ceremony at the park.

• There has been talk in recent years about putting up a tribute to Johnson in the Snow Hill area, but it hasn’t happened as of this writing.