PICTURE THIS: On Cambridge Creek, the Oldest Crabpacking Plant in the World

By Secrets of the Eastern ShoreNovember 1, 2020November 13th, 2020No Comments

Home / Characters / PICTURE THIS: On Cambridge Creek, the Oldest Crabpacking Plant in the World

Crabs weren’t always a big deal on the Eastern Shore. All the way through the 1800s, the oyster was the unrivaled king of Chesapeake seafood. Crabs were an afterthought. People rarely ate them—and when they did, they had to catch them, because nobody was selling crabs or crabmeat on a commercial basis.

This iconic Delmarva scene up top here—it’s the work of Jill Jasuta Photography, of course—speaks to a transition that unfolded as the 20th century arrived. The oyster’s reign was coming to an end. The blue crab was on the rise.

The story I have in mind begins with a man everyone knew as “Captain Johnnie.” Born in Bloxom, Virginia sometime around the Civil War, John Morgan Clayton eventually made his way up the Chesapeake Bay and settled in the remote southern reaches of Dorchester County, Md., on Hoopers Island.

Early on, Captain Johnnie made his living as a merchant sailor. He worked a route between the Chesapeake Bay and the West Indies. His sailboat was always chock full of some combination of pineapples, coal, lumber, and salt. Perhaps he got tired of sailing. Perhaps he sensed a new opportunity in the air. In 1890 he started up a seafood processing plant at the end of a 1,000-foot-long pier at Hickory Cove, off of the Honga River. It was right next to a steamboat wharf, making doing business with Baltimore a breeze.

The long reign of the oyster was starting to look a little iffy at this point, due mainly to overharvesting but also probably some pollution issues fueled by the growth of cities. The oyster population was dwindling noticeably when Captain Johnnie entered the business. In the coming decades, that population would plummet nearly to nothing.

Captain Johnnie helped spark the change that kept a whole lot of watermen working in the decades ahead. He was certainly the first processor on Hoopers Island and in Dorchester County to jump into commercial sales of crabs and crabmeat. The Maryland Historical Trust says he ranks as “perhaps the first on the Eastern Shore” as well. Captain Johnnie named his brand “Epicure,” which was also the name of his 40-foot-long log canoe.

After three decades on Hoopers Island, Captain Johnnie saw that the world was changing. Steamboats were starting to fade. Railroads and trucks were on the rise. Fancy new amenities like the telephone were becoming more important in doing business. Hoopers Island didn’t have telephones or railroad tracks. The roads were not yet up to snuff.

Captain Johnnie decided to move his business to the closest “big” city—Cambridge, 30 miles away. He bought a processing shack—the one you see in the photo here—on Cambridge Creek that belonged to an oyster packer called Tubman, Mills. The building dates to 1900 and occupies what the Historical Trust calls a “pivotal site on the Cambridge waterfront” and ranks today as “one of the oldest and the most significant brick packinghouse structures remaining on the Eastern Shore.

Life in the Crabpicking Room

Captain Johnnie didn’t just move his business to Cambridge. He moved all of his employees who were willing to relocate as well, loading their belongings onto boats for the journey up the Chesapeake Bay and into the Choptank River. Among the employees who made that move was an African American woman named Fronie Dorothy Jones. She worked as a crabpicker at J.M. Clayton from the age of eight right on through to her late 80s—a span of 79 years on the job. Fronie Jones died in 1992. Her daughter, Nicie, followed in her footsteps. She started as a teenager and then worked in the picking room for 69 years, retiring in 2015. Nicie passed away in 2018. 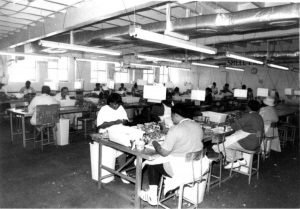 In the picking room at J.M. Clayton, each picker is given a number. The amount of crab meat any given workers picks in a day is posted under that number on a big board. The picker’s number is also printed on cans of pasteurized Epicure crabmeat. Fronie was #10. Nicie was #12. The company has “retired” both of those numbers in the way sports teams retire the jersey numbers of superstars. This quote from Nicie appears in a 2015 article in Baltimore magazine:

“As a child, I went out to pick crabs early in the morning, go to school, and then come home and crack more claws in the afternoon. I loved it, loved all the carrying on with my mama and the women I knew in the picking room. Oh honey, it was lovely down at that crabhouse.”

It still is. J.M. Clayton Seafood Co. has been running nonstop since Captain Johnnie started it up in 1890. The three brothers who run the place nowadays are fourth-generation descendants of John Morgan Clayton. A representative of the fifth generation is on the workforce and waiting in the leadership wings.

Ups & Downs of the Crab Trade

Back in the 1920s, the move from Hoopers Island worked out great for Captain Johnnie. Demand for Chesapeake Bay crabs and crabmeat was growing by leaps and bounds. The train station was just across the creek from Clayton. Epicure crabmeat was loaded daily onto trains bound for Wilmington, Del. From there, it would make its way to Philadelphia, New York, and other cities.  Giant blocks of ice were shoved into bunkers on either end of the railroad car to keep the crabmeat fresh on its journey.

J.M. Clayton expanded several times in the decades that followed. Early on, Captain Johnnie put an addition on that first building he bought. In 1924, the company took over a nearby packinghouse. In 1944, it took over another one. In 1985, Clayton opened a seafood restaurant on their property called Clayton’s on the Creek. That lasted a decade or so, but the concept lived on, as Snapper’s Waterfront Café has been operating next to J.M. Clayton on Cambridge Creek since 1994.

The workforce at Clayton has fluctuated over the decades. Shortly after moving to Cambridge, the company employed 134 crabpickers. In the mid-1960s, that number hit a peak of 160. Crab harvests declined in the decades that followed. Experts attribute that drop to a mix of pollution and overharvesting. The Clayton workforce numbered about 100 at the dawn of the 21st century—it’s dropped another notch since then.

The composition of the workforce has changed as well. For most of the company’s life, the crabpicking room was staffed by locals, mostly women. But as society changed and women won more workplace options, fewer and fewer locals wanted to take on the smelly, seasonal, and exceedingly hard work of crabpicking. The few that did give it a try—well, most of them quit in pretty short order.

In the 1990s and early 2000s, J.M. Clayton went to extraordinary lengths to try and recruit local residents. At one point, the company even hired a van to shuttle unemployed workers to and from Baltimore, 90 minutes each way. Eventually, however, Clayton signed on for legal permission to bring in the seasonal Mexican workers who make up the bulk of the staff at most of the traditional seafood processing houses still operating in the region. They are here legally on seasonal visas known as “H2-B.” Constant fluctuation in the availability of those visas has wreaked quite a bit of havoc on the operations of many processing operations on Delmarva in recent years.

Several years ago, I interviewed a few of these Mexican workers for a magazine story I was putting together. My favorite quote came from Consuelo Martinez, who was at that point a veteran of six seasons of crabpicking:

“That first year, in Mexico, I learn that I will go to pick blue crabs. I don’t even know then what is a crab. I come here, I see all these orange crabs on the table. And so the first thing I say is, ‘Where are the blue crabs? Why are there no blue crabs?'” 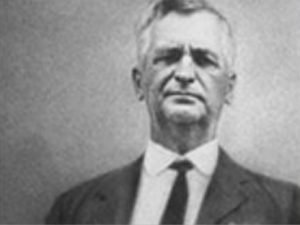 With the help of women like Consuelo, J.M. Clayton is still plugging away, no end in sight. There isn’t any doubt about the company’s historic standing. It ranks as the oldest seafood packing operation on Delmarva. The company also proudly and loudly claims the title of “oldest continuously operating seafood packing house in the world.”

I don’t know if anyone has actually researched that in all of the world’s nearly 200 countries. But on the other hand, no one has put up any argument with J.M Clayton over that claim to date. So here’s to Captain Johnnie, his descendants, and their hard-working employees for doing right by our seafood heritage since clear back in 1890, longer than any other operation in the world.

–posted by Jim Duffy for Secrets of the Eastern Shore/Whimbrel Creations LLC on Nov. 1, 2020. All rights reserved.

• The featured photo here is by Jill Jasuta Photography. It’s available in the Shore Store on this site as a canvas, metal, and simple print. Check that product out here. And here is the photo again (more notes below the photo …)

• The photograph below is also by Jill Jasuta Photography. It’s available in the Shore Store on this site as a canvas, metal, and simple print. Check that product out here. It’s also available here as a Christmas card (more notes below the photo …) 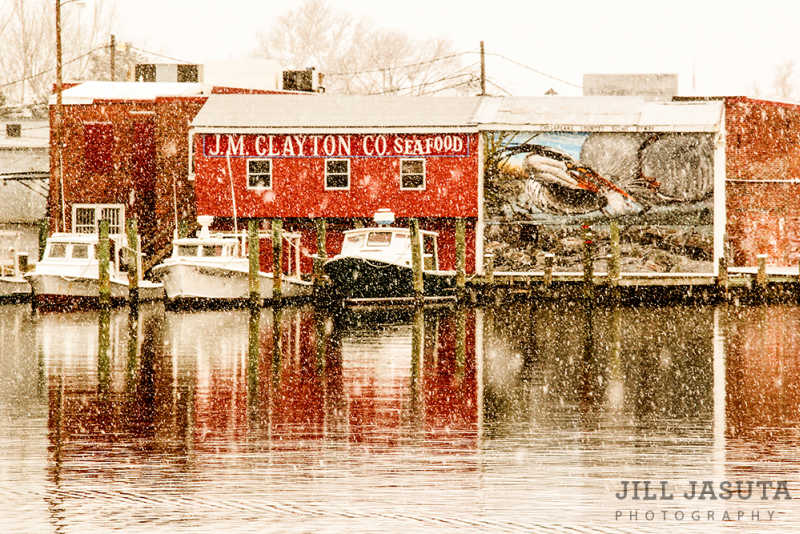 • If you want to take in the scene for yourself, it’s visible as you cross the drawbridge over Cambridge Creek. Look to the north and you will see the signature red of J.M. Clayton Co.

• If you want to visit J.M. Clayton, the address is 108 Commerce Street in Cambridge. They do sell crabmeat direct to consumers—fresh-picked in season and pasteurized in cans all year round. There are also some souvenirs available—T-shirts, hats, and the like. The J.M. Clayton website is here.

• The mural painted on the creek side of the building is the work of an incredible artist named Michael Rosato, who lives in nearby Church Creek and does work all over the country. He has done a number of extraordinary murals focused on the natural and cultural heritage of Cambridge and Dorchester County. You can follow the Chesapeake Mural Trail of his work here.

• Last not least: Thank you so much for spending a little time with our work. Both the photographer (Jill Jasuta) and the writer (Jim Duffy) appreciate your interest in our little project and hope it inspires you to get out and explore this incredible peninsula!