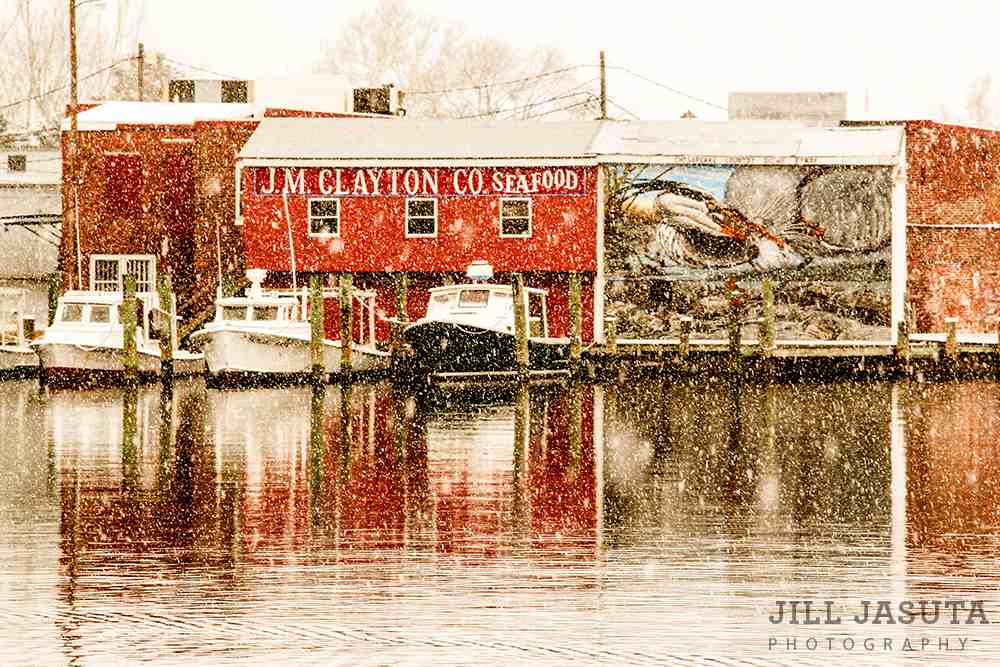 Secrets of the Eastern Shore announced this week the release of five fun holiday and wintertime greeting cards for the coming Christmas season. One of the cards features an illustration of muskrats by the artist Yuching Chen; the other four feature the work of the award-winning Jill Jasuta Photography. The cards are now available at the EASTERN SHORE STORE, the online shop with products that celebrate all things local here on the Eastern Shore and in Southern Delaware. The shop is located at the Secrets of the Eastern Shore website. Cards are available in various quantities–as single cards or in packs of 3, 10, or 20. (Special “early-bird” discount prices on packs of 10 or 20 are available through Sunday, Nov. 15.)

• J.M. Clayton’s in the Snow Greeting Card. Pictured at top, this 5-inch-by-7-inch card features an iconic Eastern Shore image, the exterior of Clayton’s seafood processing, a family-owned business in Cambridge that is believed to be the oldest such operation in the country, if not the world. The image is by Jill Jasuta Photography. The notecard is blank inside. • Umbrella in the Snow Greeting Card is a 5-inch-by-7-inch card featuring an image by Jill Jasuta Photography of a colorful umbrella in the middle of a Delmarva backroad on a gorgeous snowy day. The notecard is blank inside.

• Charcoal With Santa Greeting Card. Also 5 inches by 7 inches, this card features another image by Jill Jasuta Photography. This one is of Jasuta’s cat, Charcoal, hugging a Santa figure while sitting on a windowsill at Jill’s home in Cambridge. The notecard is blank inside. • Crab Basket Christmas Tree Greeting Card. This 5-inch-by-7-inch card features the Eastern Shore Christmas tree erected annually by community volunteers in downtown Cambridge. The image is by Jill Jasuta Photography, and the words on the front say “Wishing you a bushel of good cheer.” The notecard is blank inside.

• Muskrats in Winter Greeting Card. The artist Yuching Chen created this illustration of two muskrat lovebirds ice skating through the Eastern Shore marshlands. The text on the front of the 4-inch-by-9-inch card says “Greetings from the Eastern Shore, Marty & Marsha Muskrat.” The notecard is blank inside.

• Bushel of Good Cheer Greeting Card. This 5-inch-by-7-inch card features an image by Jill Jasuta Photography of that Eastern Shore staple, steamed crabs. The text on the cover says, “Wishing you a bushel of good cheer!” The card is blank inside.

The website and Facebook page of Secrets of the Eastern Shore feature an array of free content by the Cambridge-based writer Jim Duffy, mostly focused on various natural and historical attractions on the Delmarva Peninsula. The Secrets Facebook page has already garnered more than 16,000 “likes.”

“Secrets is all about giving people in our area the chance to show a little extra Shore pride in life–whether that’s putting a skipjack magnet up on the fridge or sending out a Christmas card with a bit of Eastern Shore flair to it,” Duffy said. “We hope people are going to have fun with these cards. We’d like to have them smiling as they go about their holiday chores.” Wholesale inquiries are welcome–send a note to SecretsoftheEasternShore@gmail.com to see about getting these Secrets cards in your store.