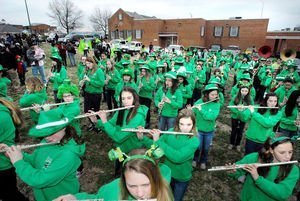 By Secrets of the Eastern ShoreFebruary 29, 2020No Comments

Here is your handy dandy guide to this year’s St. Patrick’s Day festivities on the Eastern Shore and in Delaware:

Milton (Del.) Parade
Sunday, March 8
Before the parade kicks off at 2pm, there is a walk/run for charity. The events has raised more than $20,000 for local causes in previous years. DETAILS.  (The Milton Theatre has free live music all day long to boot, and here are those details.)

Search for the Shamrocks in Chincoteague, Va.
Friday/Saturday, March 13-14
Go on an Irish-themed scavenger hunt through the downtown area. there are prizes involved. Costumes encouraged. DETAILS.

Irish Pot of Gold Bingo, Grasonville, Md.
Saturday, March 14
There will be Irish soups & soda breads available, along with Irish coffee and beer. The games are at the Chesapeake Bay Environmental Center. DETAILS.

The St. Patrick’s Saturday Pub Crawl & and Sunday Concert in Milford, Del.
Sat.-Sun., March 14-15
Restaurants and businesses will be serving up creative St. Paddy’s treats at the 10th annual crawl. Bagpipes, dancers, and more at the Saturday show. DETAILS.

Ocean City Parade & Festival
Saturday, March 14
The parade kicks off at noon and runs along Coastal Highway from 58th to 45th. Festival is in the 45th Street shopping plaza. DETAILS. 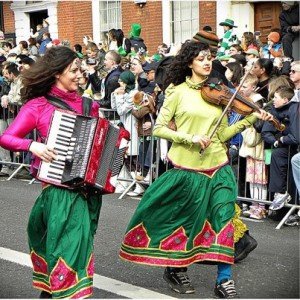 Chesapeake City (Md.) Parade & Pub Crawl
Saturday, March 14
The parade kicks off at noon, and there will be awards and live music afterward, as well as a Pub Crawl through downtown. DETAILS.

Irish Music by Three Sheets in Chincoteague, Va.
Saturday, March 14
At the historic Island Theatre in the heart of downtown Chincoteague. DETAILS.

Brews on Board the Wilmington & Western Railroad in Wilmington, Del.
Saturday, March 14
Bellefonte Brewery will supply beers while you ride through the Red Clay Valley on a historic tourist train. DETAILS.

The Shamrock Bar Crawl, Salisbury, Md.
Saturday, March 14
Get your green garb on for this afternoon pub crawl with stops in at least six bar & restaurants. DETAILS. 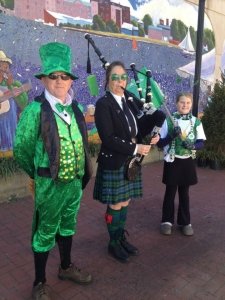 Easton (Md.) Parade & Events
Tuesday, March 17
This parade, pictured up top, kicks off at 5:30pm in the downtown area. There will be a fun Potato Race afterwards. DETAILS.

Shopping Cart Races & More, St. Michaels, Md.
Tuesday, March 17
This big annual party at the Carpenter Street Saloon goes on all night long, but the highlight comes at midnight with the rough-and-tumble annual Shopping Cart Races benefitting a couple of local fire companies. Just up the street, the Blackthorn Irish Pub has bagpipers and other festive touches planned. DETAILS.

LOST HISTORY: The Friendship of Frederick Douglass and The Irish
Saturday, March 28
Historian John Muller in Denton, Md. will discuss the relationships that the great abolitionist, orator, writer, and Eastern Shore native had with Irish Americans during his younger years in Baltimore as well as the experiences he had with the Irish while traveling across the Pond later in life. DETAILS.

• If I missed something in your town, feel free to give it a plug in the comments below!

Secrets of the Eastern ShoreAugust 2, 2022