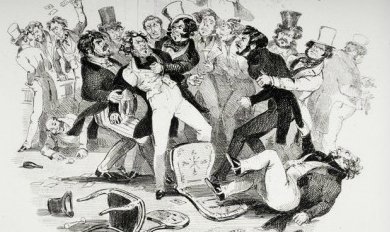 QUOTE OF THE DAY: The Year Election Day in Lewes Turned into an All-Out Brawl

Home / Way Back Machine / Quote of the Day / QUOTE OF THE DAY: The Year Election Day in Lewes Turned into an All-Out Brawl

Angry crowds swarmed through Lewes brandishing clubs, swords, and guns, knocking down anyone who stood in their way; and some victims lay unconscious in the street. Many residents … retreated behind closed doors. Others scampered out of town. It was election day, 1787.

The animosity on display that day centered around geography as much as politics. Early on, most people in Sussex County lived along the coast. As time went on, more and more people started settling in inland areas nearer to the Maryland border. For whatever reason, these two groups developed quite the mutual dislike. The fact that they did not see eye to eye on the issues of the day aggravated the situation.

Back to the story, as told by the historian Michael Morgan:

… At the time voters were required to travel to the county seat [then in Lewes] to cast their ballots; and the wretched state of the roads in southern Delaware made this a dismal hardship for the people who lived in central and western Sussex County. The extended trip was exacerbated by the hostile reception that voters from the interior were likely to receive in Lewes.

Many voters traveled to the polls armed with pistols, cutlasses, and other weapons. In addition, the militias that sprang up during the Revolution gave some groups a quasi-military organization; and on election day in 1787, two of these groups marched into Lewes with colors flying and clubs at the ready.

Most inhabitants of Lewes fled in terror, but the mob was able to beat and wound several people, including one of the election inspectors. The boisterous crowd challenged would-be voters to prevent those who opposed them from casting their ballots. Some were threatened with dismemberment, the traditional penalty for traitors.

When reports of the violence in Lewes reached the Delaware General Assembly, a new election was ordered; but the polling place was moved to Vaughan’s Furnace in central Sussex County. The election was held a month later, with hundreds of men armed with muskets parading past the polls. Some intimidated voters by cocking their weapons and threatening to shoot anyone on the wrong side.

After the voting was done, sheriff Peter Wright barricaded himself in the polling place and spent an anxious night waiting for a group of 20 armed men who were reported to be on their way to destroy the ballots. The mob failed to appear, and the election results were certified as official.

FOOTNOTE: Mr. Morgan goes on to explain how this sequence of events led the inland population of Sussex to start pushing for a new county seat where they might not feel quite so unwelcome and threatened as they did in Lewes. That lobbying paid off, and in 1791 the county started buying up land and laying out streets for the town we know today as Georgetown.

FAN CLUB NOTE: As many of you already know Mr. Morgan does great work on local history. This excerpt is from his book Pirates & Patriots: Tales of the Delaware Coast. You can find the book here on Amazon. Here is his author page on Amazon, with a number of other books. Many of his books are available in local bookstores and retail shops, so please feel free to check there first.