The Longest Day: The Wreck of the Sallie W. Kaye off of Ocean City, 1883

By Secrets of the Eastern ShoreJanuary 6, 2020No Comments

Home / Way Back Machine / The Longest Day: The Wreck of the Sallie W. Kaye off of Ocean City, 1883

The storm that raged in the waters off of Ocean City in the predawn hours of Jan. 10, 1883 had the seven-man crew of the Sallie W. Kaye sailing blind. The sailor assigned to lookout duty aboard the schooner that morning would later guesstimate that he could see just one ship length ahead through the snow and fog.

Everyone got to work lowering the yawl into the sea, but a furious wave swept over the whole of the schooner at a critical moment during that operation and the yawl broke free. The sailors spent a scant second or two watching their lone lifeboat get swept out to sea. Then they did the only thing left to do, climbing up into the rigging of their three-masted schooner to get above the fury of the sea.

They hadn’t even lowered the sails. Eventually, all seven crew members wrangled their way off of the ropes and out onto the jib boom, where they loosened a sail and wrapped themselves in it, hoping that the drenched fabric might somehow keep them warm.

Below, the waves ripped the cabin off of Sallie W. Kaye and tore hatches open. She was soon full of water. Every now and again, an especially angry wave would lift the whole waterlogged schooner up a notch, then drop her back down with a bone-jarring thud. Every time that boat rose, the sailors wondered if this would be the one that broke the mast and poured them off into the sea.

After three hours of this, a German sailor named Anton decided their situation was hopeless. He volunteered to make a longshot swim for land in search of help. The six who stayed on the jib watched Anton give it a noble try, but his strength faltered and his body eventually stopped moving shoreward, drifting south with the sea instead. His body would turn up a couple of days later.

Surfmen to the Rescue

Even before they learned about the wreck, the men at the U.S. Lifesaving Service station in Ocean City had endured a trying day. A foot patrol had gone out that morning, but they didn’t make it far, as the one-two punch of furious waves and a high tide made the beach impassible.

Finally, a break in the storm opened up a brief window of visibility. A local farm boy spied the wreck. He had to wait until the tide receded, but as soon as it did he set out to alert the station’s “surfmen” to the crisis. The station was six miles away, to the south. The boy was halfway there when he ran into a crew of surfmen coming north.

They, too, had spotted the wreck. Their trip up the beach was a nightmare. The waves of the storm had cut gulleys into the sand so deep that the men couldn’t manage to push their wheeled lifesaving gear. They went to a local farm and borrowed a wagon and a team of oxen. 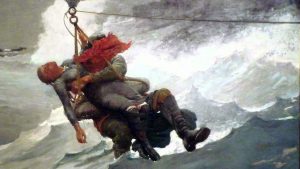 The artist Winslow Homer’s painting of a breeches buoy rescue.

The first responders finally arrived at the wreck site at 2pm. By this point, the six surviving crew members had been out on that jib boom through eight hours of wind, snow, and rain. Lifesaving crews back then used the “breeches-buoy” strategy that works kind of like a modern-day zip line. They used a cannon-like “Lyle” gun to shoot out lines equipped with leg harnesses and pulleys as far as 600 yards.

Thankfully, their first shot at the Sallie Kaye with that Lyle gun was a bullseye. One by one, the surfmen reeled the six frozen sailors into shore. With a grueling six-mile walk back to the station ahead, everyone breathed a sigh of relief when another local farmer showed up with a cart. Everyone arrived at the station at 6pm, 12 long hours after the crew’s ordeal on the jib had begun. Can you even imagine how they must have felt to get a change of clothes, a cup of coffee, and a hot meal? All six survived the ordeal.

–posted by Jim Duffy on Jan. 7, 2020 for Secrets of the Eastern Shore/Whimbrel Creations LLC

NOTE: There is an excursion devoted to shipwrecks in my book, Eastern Shore Road Trips: 26 MORE One-Day Adventures on Delmarva. On the itinerary there: the Ocean City Life-Saving Station Museum on the boardwalk in Ocean City, Md.; the Indian River Life-Saving Station Museum between Bethany Beach and Dewey Beach, Del., and the DiscoverSea shipwreck museum in Fenwick Island, Del.