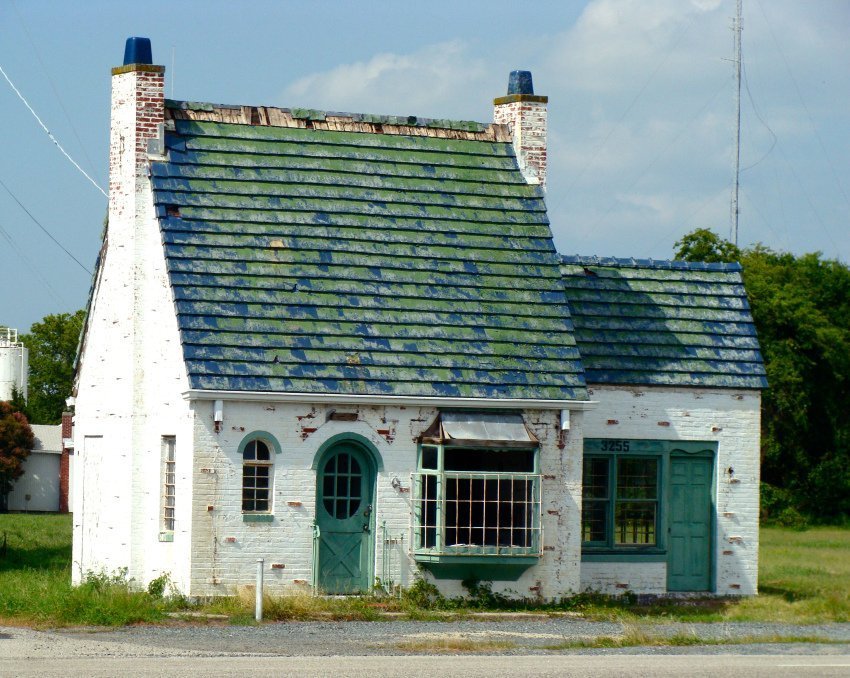 Some empty buildings are just that, unfortunate bits of neglected junk on the Eastern Shore landscape. Others are something else altogether: Dilapidated, perhaps, but still graced with the ability to unravel fascinating secrets behind key turns in the life of the Shore—and even the country—in days gone by.

Take this old guy, for example. He stands on the outskirts of Cape Charles, just where you are finally making your way into town from the highway. With paint peeling, weeds growing, and that tattered for-sale sign in the parking lot, the building wears a sad face.

But despite all that, it still manages somehow to announce itself as a distinctive sort of structure. And that’s exactly what it is.

To those in the know, the building marks a fascinating chapter in a revolutionary development in American life and business, the birth of the automobile. As cars became more and more popular in the early years of the 20th century, the need for gas stations grew by leaps and bounds.

But gas stations did not become popular. In fact, people generally regarded them as filthy firetraps. They didn’t want gas stations located anywhere around their homes or businesses.

The way this building was designed changed all that. The self-trained architect Carl A. Petersen came up with the concept in 1926 for the Ohio-based Pure Oil Company. The general idea was to build a safe, efficient gas station that even the neighbors could love.

Soon, just about every Pure Station around the country had this distinctive English Cottage design. Each was painted white and featured a sharply pitched roof topped with blue-enameled terra cotta. Back in the day, both chimneys would have been adorned with large “P”s. These were prefabricated buildings, made of steel and faced with brick or stucco. They were trimmed with faux shutters and cute flower boxes. 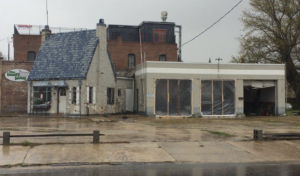 In the end, Petersen’s idea of transforming the gas station outgrew his original concept of placating neighbors. The distinctive architecture, common color scheme, and suburban design touches turned out to be a key first step for the entire oil industry toward what we would think of today as branding strategies.

Petersen’s cottages continued to be built into the 1950s. Ever since, they’ve been slowly but surely disappearing. The articles about them that I found don’t have a firm number on how many are left, but preservationists seem worried that more and more of them are disappearing. Cape Charles is lucky enough to have two of them actually–there is another one over on Mason Avenue that is currently empty as well.

I wouldn’t give up hope quite yet for these old girls. Sometimes, these old Pure Oil stations do find their way to 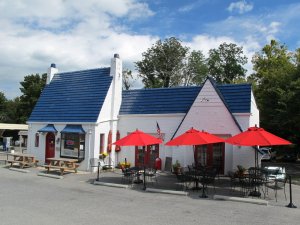 happy endings. The one in Monroe, WI is on the National Register of Historic Places. So is the one in Geneva, IL. There is a third one, in Zion, IL, that has been transformed into a coffee shop by owners who seem quite proud of the building’s history. And a handful of old stations in Georgia seem to be surviving in the 21st century.

In the comments below, Jane pointed me to the one pictured here–an old gas station in Lexington, Virginia that is now a restaurant called Pure Eats.

Who knows? Maybe there is hope yet for the neglected old guy in Cape Charles. 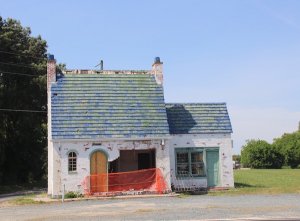 Update 6-2-2015: Or perhaps there is not that much hope for this fading beauty. Reader Steve in the comments below was the first to let us know that a pickup truck plowed into the gas station in the spring of 2015. Here at right is the photo of the accident damage. Very sad …

Update 5-12-17: The hope is back. The most recent comment below is from Laura of Tide & Thyme, an always interesting blog about regional foods and recipes. She reports that the old girl has now been purchased and folks in town are eagerly awaiting to hear what might be in store next.

Meanwhile, there is action over at the English Cottage gas station on Mason Avenue in Cape Charles as well. That station has been purchased by sisters Carol and Beth Ann Sabo, who plan to turn it into a cool little bookstore called Peach Tree Books. Here is a newspaper article about their project. And here is where you can follow their progress on Facebook–there are some cool construction photos up there!

Here is wishing good luck and god speed to both sets of owners.

NOTE: The photo at top is by Jill Jasuta Photography. 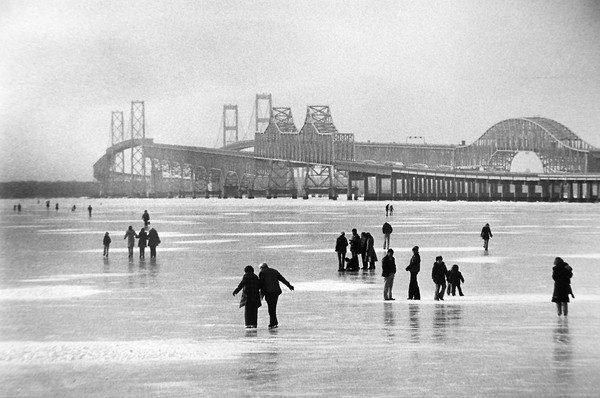 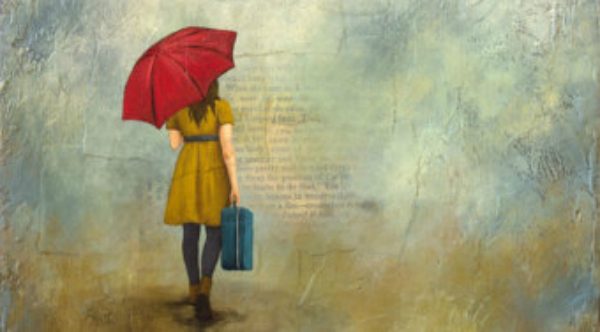 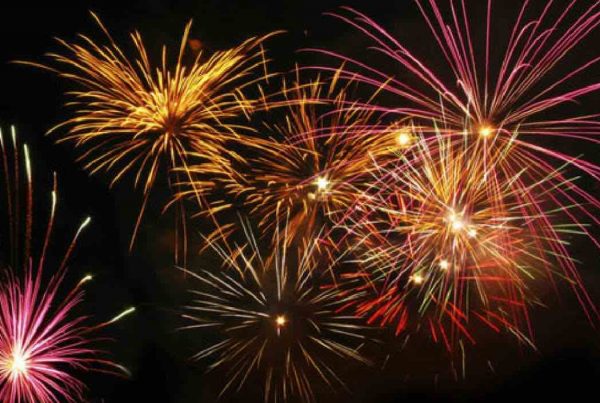