By Secrets of the Eastern ShoreDecember 31, 2020No Comments

This is a free excerpt from Eastern Shore Road Trips 2: 26 MORE One-Day Adventures on Delmarva. It comes from a chapter that includes stops in the towns of Elkton, North East, and Charlestown, as well as a visit to a covered bridge the remains of an old gristmill.

The most beautiful of those overlooks lies at the end of a 12-or-so-mile drive down Turkey Point Road (Route 272). This winding, hilly affair runs through the 2,500-acre Elk Neck State Park, which offers 12 miles of hiking trails and an array of park facilities, some of which date from the Great Depression days of the Civilian Conservation Corps.

The park’s most famous attraction dates back even further, by a full century. Turkey Point Light was built in 1833 to alert mariners of the turn into the Elk River that would lead them into the Chesapeake & Delaware Canal, a then-brand-new shortcut to the Delaware River and its prosperous urban markets of Wilmington and Philadelphia.

That beacon still stands here, wrapped in white stucco and topped by a black roof and a glass light chamber. Getting to the lighthouse involves following Turkey Point Road clear down to its dead end and then embarking on a reasonably easy stroll of three-quarters of a mile. As of this writing, the interior of the lighthouse is open for a few hours on Saturdays and Sundays in the warmer months, which is when you will have the opportunity to climb the 31 steps inside and visit a little gift shack outside.

But the trail is open every day, and the scenery out here will be worth the walk whether the beacon’s interior is open or not. Turkey Point is just 35 feet tall, but it’s perched atop a 100-foot-high bluff. Measuring from the water, it ranks as the third tallest of the 82 beacons that have done duty on the Chesapeake Bay over the centuries. The views are out of this world.

The Women Who Kept the Beacon

Turkey Point Light has a second claim to fame as well. During the 19th– and 20th-century periods when men dominated the lighthouse-keeper game, this light had four different female keepers. Women were in charge here for 89 of the 115 years that the facility was, um, manned on a 24/7 basis.

All four women snuck into the post by way of family connections. Elizabeth Lusby took over after her husband died in 1844. Rebecca Crouch got the job the same way in 1873 and was succeeded by her daughter, Georgiana Brumfield. The fourth distaff keeper, Fannie May Salter, took over for her late husband in 1925 and served for 22 years, at which point the light became an automated affair, with no need for a keeper to live on the grounds. At her retirement, Salter offered this nonchalant summary of her service:

“Oh, it was an easy-like chore, but my feet got tired, and climbing the tower has given me fallen arches.” 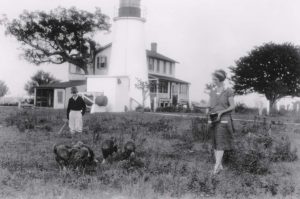 Fannie May Salter and son feeding turkeys in the 1930s

It’s one thing to note that these women were gender pioneers in a male-dominated field, but think, too, while wandering that bluff, about the sort of work they took on. Turkey Point was isolated as can be through the 1800s and into the 1900s. The roads from the closest towns, North East and Elkton, were bumpy, muddy messes. Most supplies arrived by boat, from Havre de Grace.

Those vessels would come ashore at the bottom of the bluff. A rickety stairway rose from there, 137 steps in all. For some of this period, keepers and their deliverymen hauled supplies up the hill along a chute by way of a windlass contraption powered by a hand-spun wheel. Farming, hunting, and fishing were part of day-to-day life. Keepers raised their own chickens, sheep, and turkeys. 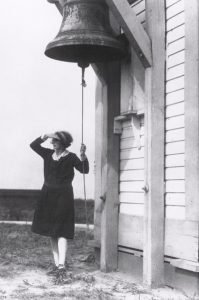 Fannie May Salter at the fog bell.

A fog bell mechanism needed to be wound up every three hours, day and night. During one stupendous stretch of haze, that mechanism failed, leaving Salter to pull a rope that sounded the bell at precise 15-second intervals for nearly a full hour, until she was certain that a steamship down below had made it safely into the C&D Canal.

Even life’s routine affairs were challenges for those keepers. Take sleeping, for example. Salter lived in a house that once stood on this bluff. She set up her bedroom in a way that allowed the light to blink directly into her face as she lay in bed—she trained herself to wake up in an instant if the blinking ever stopped.

The social isolation out here on Turkey Point could be quite intense. Salter found solace in word games:

“I never seem to get enough of crossword puzzles. My friends send me hundreds, but I’m always fresh out.”

The last time I made the walk out to the lighthouse at Turkey Point, the wide trail up and back was awash in birds and deer. Heading back up Turkey Point Road, you’ll pass the Elk Neck State Park office, which is where you can get more information about other parts of the park you might want to explore. If you’re looking to get the heart pumping on the most ambitious of the uphills, take the White Banks Trail, a three-mile round trip that offers more spectacular overviews of the bay.