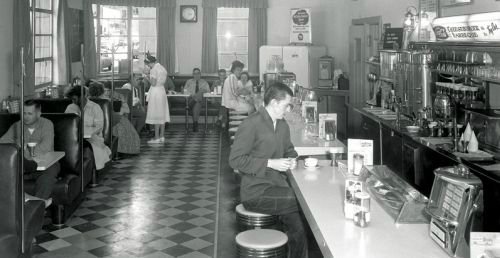 I wrote this for a magazine in 2008, shortly after Doris Mae passed away. She is still missed by a whole bunch of folks around my town.

Thinking about Doris Mae these days, and the joint she used to run in downtown Cambridge, I find myself seeing scenes in my mind’s eye out of an imagined black-and-white Hollywood movie from the 1930s. It’s about a pretty little spitfire of a small-town gal with a big ol’ heart and a smile as broad and bright as the sea on a sun-dappled day. This gal is bound to get the guy in the end, because she’s the real deal, a mix of working-class grit and girl-next-door charm.

There’s something completely ridiculous about this. You see, I barely knew Doris Mae. Most of what I know about her life story—that she married at 17 and had four kids, four grandkids, and two great grandkids by the time of her recent 60th wedding anniversary—I learned while reading her obituary.

In the real world, the exchanges I had with Doris Mae amounted to idle small talk, nothing more. The obit says she died at the age of 78, so she was 74 when my wife, Jill, and I moved to Cambridge and met her for the first time. And yet there she is in my mind’s eye, a spry and fast-talking young waitress working tables at Two Mile House and Willey’s, a couple of local restaurants that were long-gone by the time I came here.

It was in 1979 that Doris Mae struck out on her own, opening a restaurant at the corner of Gay, Race, and Poplar streets. She served breakfast and lunch six days a week for 29 years, which means she fell 21 years short of the goal I heard her set for herself one morning while she was working the grill.

“I want to be here when I’m 99,” she announced, a mischievous twinkle in her eyes. “But I might retire after that. A hundred, that feels about right to me.”

Doris Mae’s place isn’t much to look at. Tiny stick-on letters in the window spell out her name in stark black type. A rattling old air-conditioner—it’s about the size of Utah—hangs over the doorway. On more than one occasion, I’ve had tourists approach me on the street outside with nervous looks on their faces and a whispered question on their lips: “What’s with this place? Is it all right to go in there?” 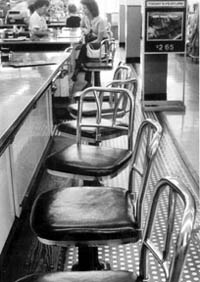 We didn’t have any such trepidation when we moved here from the Western Shore. That’s because our friends John and Anne, who’d made the same move themselves a few years before us, talked about Doris Mae’s in hushed and reverent tones, as if this little downtown diner ranked as nothing less than a slice of sheer heaven miraculously dropped down into the heart of our downtown.

The food at Doris Mae’s was good; the atmosphere was out of this world. Credit for that goes to Doris Mae herself, of course. Physically, she was a tiny little thing, but she carried herself in a way that communicated great reserves of strength and joy. She had that broad, bright smile and a big voice, both raspy and cheerful. In busy stretches, she’d work the grill like a dancer, pivoting and flipping and reaching and dipping without missing a beat in the banter between regulars on nearby barstools.

The restaurant was a two-person operation, with Doris Mae’s daughter Glenda waiting tables. One day I had to run off to a meeting before the check came, and Jill got stuck with the bill. Glenda never forgot that shocking display of ungentlemanliness—and she went out of her way to mention it to everyone in the place pretty much every time I stopped by.

Thinking about Doris Mae’s, I find myself wishing that I’d stopped in a lot more often than I did in these past few months. The mix of customers she brought together every morning was really striking, a we’re-all-in-this-together mix of races and classes and professions. On any given morning in Doris Mae’s joint, you might see lawyers, barbers, hunters, painters, beauticians, florists, politicians, real estate agents, watermen, homeless guys, and interior designers. And you’d most likely encounter a mix of come heres, from heres, and come back heres, all trading barbs and gossip and greetings in a veritable symphony of small-talk.

I found it pretty much impossible to leave Doris Mae’s without a smile on my face and the feeling that I had just reached way down and touched the roots of this place we’ve called home for only a few short years. Her place was the real deal, and so, without a doubt, was Doris Mae Todd. May she rest in peace.

• Written by Jim Duffy. Copyright Secrets of the Eastern Shore

• NOTE #1: I am sorry to say that is not Doris Mae’s joint in the picture up top. It is just an old photo of some other joint that has the same vague layout. Alas, I don’t have any good photos of Doris Mae.

• NOTE #2: This little essay of mine from back in 2008 resurfaced in an interesting way. In December of 2016, a Presbyterian minister out of Atlanta named Kim Long somehow found her way into my little holiday-season pop-up shop in Cambridge. We got to talking, and it turned into one of those small-world moments.

Somehow, Rev. Long had found her way to my little essay about Doris Mae back when it was published. Not only that, she used it in a book she wrote about worship services and how to lead them. She stopped by the store again the next day and made a gift to me of that book.

I must say, it was more than a little humbling to see my name and my words sandwiched in between quotes from Eudora Welty and Annie Dillard, but there you have it. Here is how Rev. Long wrapped up the section where she talks about this essay:

Mr. Duffy may not use the language of the “kingdom of God” when he describes what happened at Doris Mae’s, but he could have. When viewed through the lens of Christian hope, the scene is a foretaste of the heavenly banquet, the coming reign of Christ, where everyone is gathered around the same table, joy abounds, and the barriers that divide us crumble into dust. It is a matter of training ourselves to see.

Do you think this means that thanks to Doris Mae, I will be covered come Judgement Day for at least some of those Sundays when I skipped out on church? God knows I’ll be counting on it. Here is a link to Rev. Long’s book if you are curious–it’s called The Worshipping Body: The Art of Leading Worship.

Albert Jackson: How a Man Born into Slavery in Milford, Del. Became a Hero in Canada 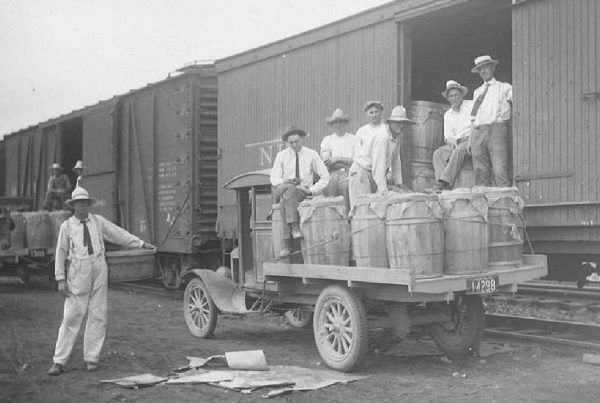