Fred “Fritz” Lucas was a baseball man through and through. The New Jersey native toiled for teams in nine different minor-league cities during the 1920s and 1930s. He had a proverbial cup of coffee with the big-league Philadelphia Phillies in 1935, getting 34 at-bats as a pinch hitter and reserve outfielder.

He returned to the minors the next year, but his time on the playing field was soon up. For a couple of years in tried his hand at managing, first with the Cambridge Cardinals and then with the Hamilton (Ont.) Red Wings. Both clubs were affiliated with the St. Louis Cardinals.

Lucas had played for teams as far away as Texas and upstate New York, but there must have been something special to him about his two stints in Cambridge, Md., as that’s where he chose to settle for the rest of his life. In time he would marry a Hooper’s Island girl, Lola Creighton. They had three girls together. Each of them had a child before their marriage the marriage as well, so they raised five children.

The history of the Eastern Shore League is storied but choppy. The first incarnation of the league lasted from 1922 to 1928 but collapsed due to financial and attendance woes. A second go-round ran from 1937 to 1941, but World War II got in the way. After the war ended Fred Lucas signed on with a group of fellow Delmarva baseball men determined to start the league up again.

They had towns and owners lined up. What they didn’t have were commitments of support from major-league baseball teams. Big-league clubs traditionally picked up the tab for things like stadium repairs for their minor-league “affiliates,” and the stadiums on the Delmarva needed a lot of repairs. In the winter of 1945, Lucas reached out to an old boss from his days in the St. Louis Cardinals organization, Branch Rickey.

Rickey had moved on by then to become the owner of the Brooklyn Dodgers. That same year, 1945, Rickey convinced a talented young second baseman named Jackie Robinson to join his organization. Two years later, Robinson would become the first African-American player in major-league history. Both Rickey and Robinson would end up in baseball’s Hall of Fame.

At first, Lucas didn’t have much luck getting Rickey to pay attention to his sales pitch. He even traveled to New York to see Rickey a couple of times, but every time he tried to go into sales-pitch mode, the Brooklyn man would shift the talk to his favorite topic, the great outdoors. Years later, Lucas recalled how it went down in an interview with historian Barry Sparks. 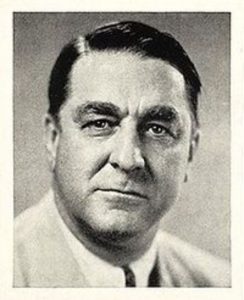 “He was an avid outdoorsman and would rather talk about fishing than Class D baseball. One day he asked me, ‘How are the fish biting in Cambridge?’ Without hesitating and without really knowing, I answered, “Great. Why don’t you come down and try your hand?”

A couple of weeks later, Rickey and his wife came to Cambridge. Lucas arranged for Hoopers Island boatbuilder Milford Elliott to serve as their guide. It was a quite the memorable day, as that historian, Barry Sparks, reports:

“Within ten minutes, Mrs. Rickey landed a good-sized croaker. A few minutes later, Mr. Rickey did the same. By the end of the day, Lucas and the Rickeys had caught ninety-six fish. Delighted, Mr. Rickey wrapped fifty of them in old copies of the Cambridge Daily Banner and packed them in one of Lucas’s old suitcases. He then caught the Colonial Express out of Wilmington for New York, the fish riding in the train’s refrigerator car.”

Rickey soon came back for a hunting trip. Alas, that day didn’t start well. Lucas had arranged for the group—himself, Rickey, and a man from Baltimore—to go out with Hoopers Islander Adrian Hynson as their guide. Things got delayed when that Baltimore guy didn’t show up. Plus, it was the coldest, bone-chillingest day of the year. Also, there didn’t seem to be any ducks around. 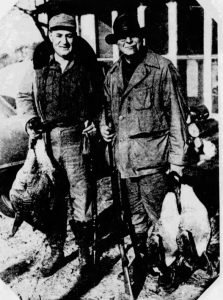 Then things went from bad to worse. A boat appeared out in front of the duck blind. It was that missing Baltimore man, and he was furious that the guide had left without him. Soon, the view from the duck blind had that Baltimore man and Adrian Hynson out on the water, each in a boat of his own, “cussing” each other out while the sun rose on the horizon.

Lucas was mortified. “I shot a sideways glance at [Rickey] to see how he was taking it. He was laughing as hard as a man can laugh.”

For the rest of his life, Rickey never tired of regaling others with the story of his Hoopers Island adventure, especially that scene that had obscenities instead of ducks flying across the marsh at sunrise.

The group shot a total of one duck that day, so there was plenty of time left for baseball talk. A few days after his return to New York, Rickey called Lucas and told him to pick out a site for a new baseball stadium.

Once the Dodgers bought into reviving the Eastern Shore League, other big-league teams followed suit like a row of dominoes. The Dodgers spent $68,000 building a stadium near Linden Avenue and Park Lane. The Cambridge Dodgers did just fine, averaging more than 1,000 fans per game and winning the Eastern League pennant in 1947. But other towns didn’t do as well, and the league folded after the 1949 season. 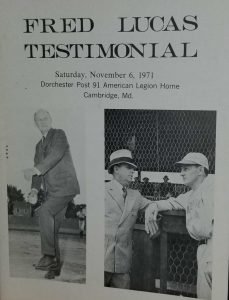 Fred Lucas did just fine in the decades that followed. For a while he owned an office supply store, Lucas and Fowler. He also had a sporting goods store–folks in town joked that he nearly went broke because of his penchant for giving away sports gear to every kid who couldn’t afford to buy from him. Lucas got elected to the Maryland House of Delegates. He served as Dorchester County treasurer. Every step of the way he kept on spreading the gospel of baseball. He was a driving force behind the start of the Cambridge Little League, the Cambridge Colt League, and the Cambridge Pony League.

In 1971, Lucas was the guest of honor at a “Testimonial Dinner” at the American Legion Hall in Cambridge. Among the attendees that night were a slew of major leaguers, including legendary Negro League star Judy Johnson (born in Snow Hill), former Cubs slugger Bill “Swish” Nicholson (born in Chestertown), and Pittsburgh Pirates manager Danny Murtaugh (played for the Cambridge Cardinals). Governor J. Millard Tawes Showed up as well.

Fred Lucas died in 1987. The following year he was inducted into the Eastern Shore Baseball Hall of Fame. Kids still play baseball today on the grounds where he convinced Branch Rickey to build “Dodger Stadium.” It’s now the site of the 5.5-acre J. Edward Walter Park.

–Written by Jim Duffy; posted on March 17, 2020 for Whimbrel Creations LLC/Secrets of the Eastern Shore. All rights reserved.