By Secrets of the Eastern ShoreOctober 22, 2019No Comments 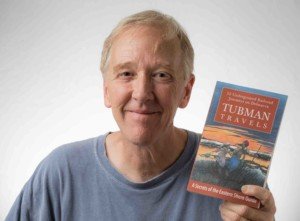 Author and storyteller Jim Duffy of Secrets of the Eastern Shore will tell tales about “Underground Railroad Journeys on Delmarva” in a presentation and discussion at the Amity Coffee Roasters & Cafe in Greenwood, Delaware on Thursday, Nov. 14. The presentation is based on Duffy’s book, Tubman Travels: 32 Underground Railroad Journeys on Delmarva.

Sponsored by the Greenwood Public Library, the event begins at 6pm at the coffee shop at 13 West Market Street in downtown Greenwood. There is no admission fee. Better yet, attendees will be able to enjoy a complimentary Amity beverage (up to $4) on the library’s tab.

Duffy has given presentations on various topics in dozens of towns up and down the Delmarva Peninsula in recent years. In the “Underground Railroads Journeys” talk, he shares keystone stories of enslaved people who made their way to freedom on journeys through Delaware and Maryland’s Eastern Shore. He also discusses the life lessons he learned and key discoveries he made while researching and writing the book.

The presentation will touch on the most famous champions of freedom from here on Delmarva, Harriet Tubman and Frederick Douglass, as well as a number of other, lesser-known heroes of the Underground Railroad in the region. A book signing will follow the talk. Copies of Tubman Travels and Duffy’s other books will be available after the talk.

An award-winning magazine writer, Duffy is co-founder of Secrets of the Eastern Shore, a homegrown business based in Cambridge, Md. that celebrates the Delmarva Peninsula in stories, photographs, and products. Its mission is to inspire people to explore the Peninsula and appreciate the incredible things that have happened in its towns, on its farms, and along its waterways over the centuries.

• Check out the Facebook event for this presentation here.

• For further information, call the library at 302.349.5309. Or email Jim Duffy at SecretsoftheEasternShore@gmail.com.

Secrets of the Eastern ShoreJanuary 22, 2023