This is an excerpt from my book, Tubman Travels: 32 Underground Railroad Journeys on Delmarva.  More info about the book is here.

Various little cabins play central roles in the stories of the Underground Railroad in this book. There is the one on Peter’s Neck where Harriet Tubman was born; another on Tuckahoe Creek where Frederick Douglass spent his childhood; still another on Poplar Neck where Tubman’s parents lived later in life; and several others to boot.

The best place on Maryland’s Eastern Shore to get a feel for what those cabins might have been like is the restored James H. Webb Cabin, which is just off of Route 16 between Preston and Harmony, on Grove Road. It was built by a free black man, James Webb, in 1852. He shared the house with his enslaved wife, Mary Ann, their four children—Charles, Elizabeth, John, and Ann; and Webb’s father, Henry.

There is no evidence that this particular cabin was used along the Underground Railroad, but it stands as a rare surviving remnant of day-to-day black life back in slavery times. Built with hand-hewn logs set on a foundation of ballast stones from tall ships, which Webb had liberated from nearby rivers, it’s a one-room affair with a loft that could be accessed only by ladder. It’s probably quite similar to the other cabins mentioned in these pages, including the one Ben Ross built just a few miles away on Poplar Neck, which definitely did serve as a station along the Underground Railroad.

Tours of the Webb cabin are self-guided affairs. You just pull up, park, and wander around the grounds, and then into the house through the back door. Think on your visit about the fact that seven people shared these tight quarters on a daily basis in Webb’s time. Be sure, too, to check out the trap door in the floor that leads to a little below-ground compartment used by the Webbs for storing perishable foods. Slaves on the run were known to hide out in “potato holes” like this when bounty hunters and sheriffs were hot on their trail.

Webb eventually bought the freedom of his wife. I am not sure of the status of his children up through the years of the Civil War. Webb lived in the cabin for more than half a century before selling it in 1906. The Caroline County historian J.O.K. Walsh puts Webb’s death in the years between 1907 and 1910, which would have put him in his late 80s.

The former slave Fannie Moore was interviewed during the Depression years by writers collecting slave narratives for the Federal Writers’ Project. Here, she recalls the day-to-day affairs of life in her family’s cabin in Moore, South Carolina. This is from When I Was a Slave: Memoirs from the Slave Narrative Collection. 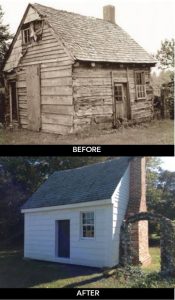 The Webb Cabin before and after its recent restoration.

“De quarters [were] just [a] long row of cabins daubed with dirt. Everyone in de family live in one big room. In one end was a big fireplace. Dis had to heat de cabin and do de cookin’ too. We cooked in a big pot hung on a rod over de fire and bake de corn pone in de ashes, or else put it in de skillet and cover de lid with coals. We always have plenty wood to keep us warm. Dat is if we have time to get it out of de woods.

“My granny she cook for us chillens while our mammy away in de field. Dey wasn’t much cookin’ to do. Just make corn pone and bring in de milk. She have a big wooden bowl with enough wooden spoons to go round. She put de milk in de bowl and break it up. Den she put de bowl in de middle of de floor and all de chillen grab a spoon.”

This is an excerpt from the Secrets of the Eastern Shore guidebook Tubman Travels: 32 Underground Railroad Journeys on Delmarva. You can learn more about the book, including where to buy a copy, here.

The James H. Webb Cabin is west of Route 16 along Grove Road, which is between Preston on the south and Harmony on the north. As far as I can tell, it does not have a traditional street address attached to it, but if you Google “James H. Webb Cabin,” you will find your way to a detailed map easily enough. The property is managed by the Caroline County Historical Society.
• CarolineHistory.org/places/james-h-webb-cabin/; 410.479.2730

The landscape here is mostly rural farmland, where shops and restaurants are few and far between. There are amenities in the nearby town of Preston, Maryland. Another option is Mary’s Country Store, 6244 Harmony Road in Preston. (The store is actually in the tiny town of Harmony, which is unincorporated—that’s why the official address is in Preston.)

Information about things to do and places to go here in Caroline County is available from Caroline County Tourism.
• 5 Crouse Park Lane, Denton, Maryland
• TourCaroline.com; Facebook.com/CarolineTourism; 410.479.0655