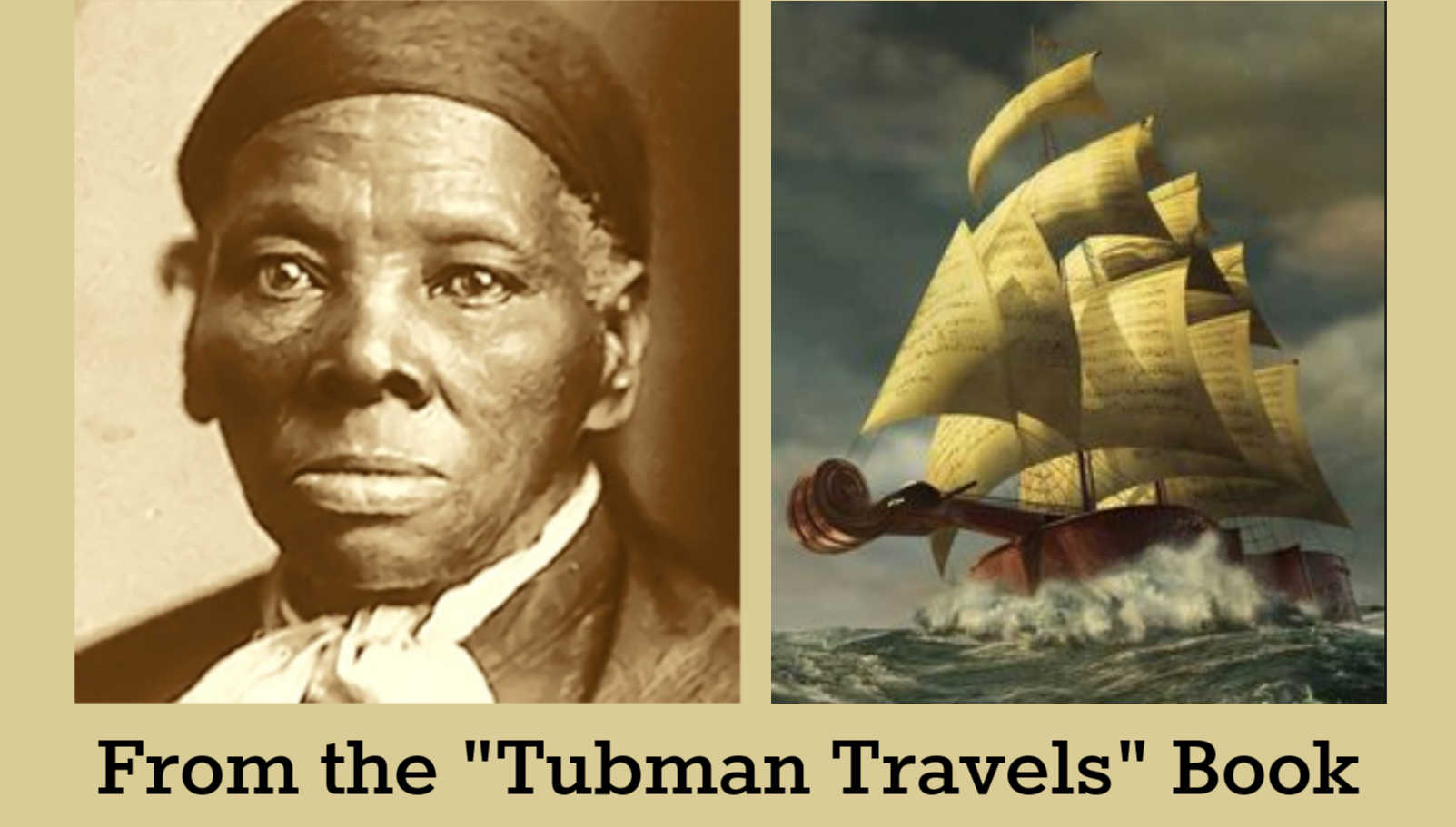 By Secrets of the Eastern ShoreDecember 5, 2019December 24th, 2019No Comments

‘The Good Ol’ Ship of Zion’ is an excerpt from my book, Tubman Travels: 32 Underground Railroad Journeys on Delmarva. It’s one of three chapters in the book devoted to one of the most famous of the escapes engineered by conductor Harriet Tubman. Each chapter in the book is a self-contained story that’s linked to a place you can visit today in Delaware or on Maryland’s Eastern Shore, but the stories are also perfectly fit for armchair reading in the comfort of your home.

Along the Underground Railroad the line that separated brave from reckless could be quite thin. Harriet Tubman is often celebrated for her bravery—and rightly so. That’s a trait she exhibited every time she came back down into Maryland to lead her family and friends to freedom.

She was usually quite cautious in the way she went about that work. She had a keen sense for the presence of danger. At the slightest sign of trouble, she would send passengers into hiding, sometimes for days at a stretch.

She had an array of tricks up her sleeve to help avoid detection. Even as a young woman in her 30s, she was quite adept at disguising herself as a frail old lady. She would also feign ignorance and stupidity, playing into the preconceptions white people had about black women.

There was an occasion in 1854, however, when it seems to me that Tubman threw caution to the wind and crossed the line into reckless territory. At the center of that story is Jacob Jackson, a free black man who lived along Route 16 just beyond the Peter’s Neck area where we left off in the last chapter.

Here is the question that I would pose to help you start thinking about the story that follows: What precious thing in your life would drive you to throw caution to the wind? I am not talking here about breaking the speed limit because you’re late for a meeting, or running your credit card balance up too high around the holidays. I’m talking about the sort of recklessness that puts the freedom of a trusted friend at risk, so much so that he might lose everything and land in jail.

Jacob Jackson must have been quite the prominent member of his community. Not many free blacks on the Eastern Shore managed to run their own 40-acre farms in slavery times. Not many knew how to read, either. This latter skill is what Harriet Tubman would try and make use of in one of her most famous operations, the Christmas Escape of 1854.

Not much else is known about Jackson, though that could change in the coming years. His old home site along Route 16, between White Marsh Road and Woolford Creek, is now owned by the National Park Service. Officials there have talked in a preliminary way about grand plans to locate old foundations, erect replica buildings, and open the site to the public, but any such developments are still many years off as of this writing.

It’s impossible to say how well Tubman and Jackson knew each other. The site of Tubman’s birth is quite close to that of Jackson’s farm. She lived and worked in this same area for a lengthy stretch of her teens and 20s. Her father was a prominent figure hereabouts as well, managing the timbering operations of a major landowner in the area.

It’s impossible, too, to say how connected Jackson might have been with the larger Underground Railroad. The fact that Tubman called on him in a moment of crisis indicates that she knew Jackson could be trusted, but no evidence has surfaced yet that he ever harbored fugitives on his farm or served as a conductor or station master.

The precious thing that drove Tubman to put the freedom of her friend Jacob Jackson at risk was her family. By late 1854, five years had passed since Tubman’s own flight to freedom. Most of her family belonged at this point to Eliza Brodess, the widow of their former owner, Edward Brodess.

Historians who have looked over household ledgers from this period say that Eliza was engaged in the 19th century equivalent of running up a credit card. There were too many purchases of fancy clothes and fashionable baubles and not enough in the way of mundane farm supplies. Eliza decided that the solution to her financial woes involved selling three slaves. Ben, Henry, and Robert Ross—Tubman’s brothers—were scheduled to go up on the auction block in Cambridge on December 26.

When Tubman received this news along the Underground Railroad grapevine, it must have struck her to the core. As a child, she had lost three older sisters to slave traders from the Deep South. Now, three brothers faced the same fate.

The Woolford post office stands today along Route 16 on the way out to the Jackson site. I am not sure where such a facility operated back in Tubman’s day, but I do know that the mail service worked a little differently then. Most every piece of mail sent to most every black person in this area got opened and inspected by white people before getting delivered. Those white people were always on the lookout for clues about runaway slaves and who might be helping them out.

Tubman herself did not know how to read or write, so she would recite her letters while others handled the actual penmanship. The letter she prepared for Jackson was signed in the name of his adoptive son, William Henry Jackson. There was some small talk in it at the beginning, and then there was this:

“Read my letter to the old folks, and give my love to them, and tell my brothers to be always watching unto prayer, and when the good old ship of Zion comes along, to be ready to step on board.”

The white men inspecting Jackson’s mail didn’t know what to make of this passage. They knew that William Henry was a free black man living in Canada. But they also knew that he didn’t have any brothers. They took the letter to Jackson and demanded an explanation. Here is what he said: “Dat letter can’t be meant for me no how. I can’t make head or tail of it.”

This apparently left the inspectors in a state of confusion, and they seem to have decided to just leave the matter alone. After the interrogation, Jackson set about alerting the three Ross brothers that their sister was coming for them. We will get to what happened next on the journey those brothers took to freedom in Chapter 7.

But the question this chapter leaves in my mind is this: What if? What if one of those inspectors had been a bit smarter or a bit more cautious? Tubman’s coded message was clever enough, as far as it goes, but it wasn’t exactly as foolproof as a modern-day encrypted computer file.

She must have known how much danger she was putting her friend in by sending this letter. The consequences for Jackson ran beyond arrest and imprisonment—there were cases from this period in which free blacks were sold into slavery for life after being caught helping runaways. And so I wonder: Just how big was the sigh of relief that Tubman let loose upon learning that Jackson had emerged from this affair unscathed?

This is the first time in our Underground Railroad travels in this book that the topic of old spirituals, such as the “Old Ship of Zion,” has arisen, but it won’t be the last. Tubman used these songs to send coded messages on several other occasions as well.

It’s hard to tell looking back through the mists of history which version of “Old Ship of Zion” might have been most familiar to Tubman and Jacob Jackson, but this version of the lyrics should give a pretty good sense for the power and promise the song must have held for people living their lives in bondage and hearing rumors about the freedom that awaited somewhere off in the North.

(1) As of this writing, the Jacob Jackson site is unmarked and closed to visitors. There are no buildings or other elements on the landscape that survive from slavery days. The site stands along Taylors Island Road between White Marsh Road and Woolford Creek.
(2) There is not much in the way of visitor amenities out this way. The Woolford General Store—1614 Taylors Island Road in Woolford, Maryland—offers essentials and sandwiches in a down-home atmosphere.
(3) Information about things to do and places to go in and around Dorchester County is available from Dorchester County Tourism.
• Dorchester Visitor Center, 2 Rose Hill Place, Cambridge, Maryland • VisitDorchester.org; Facebook.com/DorchesterCounty; 410.228.1000
(4) The Harriet Tubman Underground Railroad Byway runs through both Dorchester and Caroline counties in Maryland and then on into Delaware.
• Maryland: HarrietTubmanByway.org; Facebook.com/HarrietTubmanByway; 410.228.1000
• Delaware: TubmanBywayDelaware.org
(5) THANK YOU SO MUCH for spending a little time today with this true story from the life of an incredible and inspiring woman. You can find more information about the book here–the title again is Tubman Travels: 32 Underground Railroad Journeys on Delmarva.