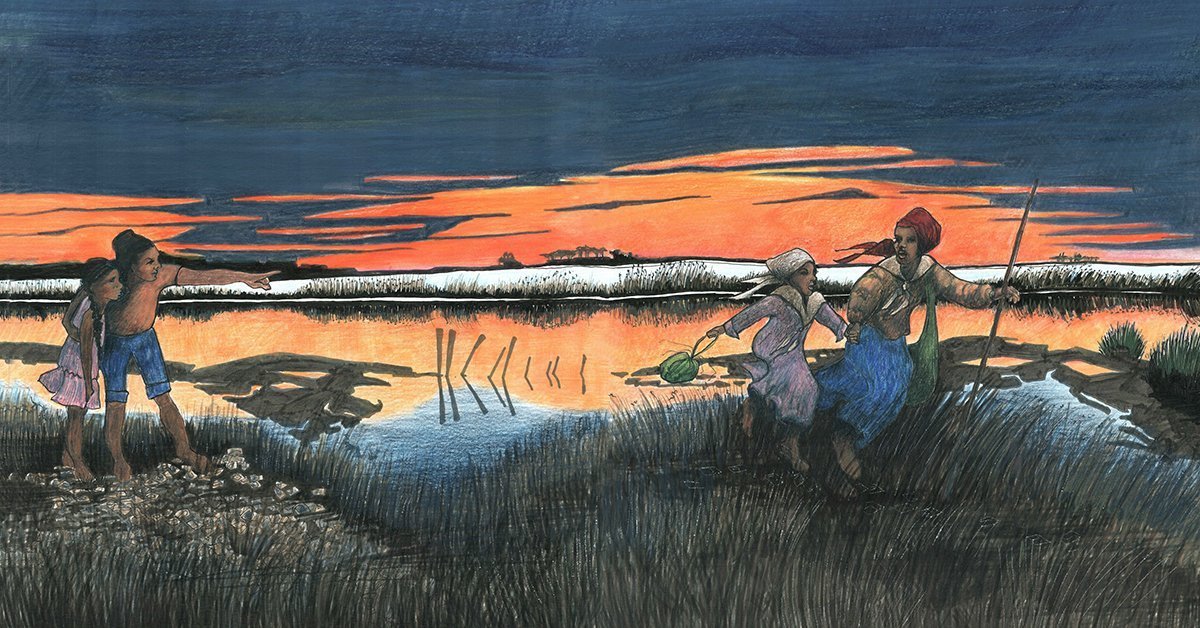 By Helen Hutchinson November 19, 2019 No Comments

‘Flight From the Auction Block’ is an excerpt from my book, Tubman Travels: 32 Underground Railroad Journeys on Delmarva. Each chapter in the book is a self-contained story from those Underground Railroad days. Each story is linked to a place you can visit today in Delaware or on Maryland’s Eastern Shore, but they are also perfectly fit for armchair reading in the comfort of your home.

The walk back from the Choptank River Lighthouse, where we left off in the last chapter, will take you onto a long pier lined with “deadrise” workboats owned by local watermen. If you’re lucky, you might pass by as one or more of these watermen go about their trade—unloading bushels of crabs, perhaps, or baiting lines for another run come dawn of the next day.

The presence of these vessels along the promenade leading up to a prominent tourist destination in Cambridge, Maryland is a statement of civic pride in the centuries-old traditions of maritime life hereabouts. The work these men do aboard their boats today is the modern-day version of the day-to-day life of a free black man named John Bowley back in the 1840s.

The stories we hear of slavery tend to be set on farm fields more often than not, with workers toiling away at sowing or harvesting or managing the affairs in a plantation mansion or smaller farmhouse. Here on the Eastern Shore in John Bowley’s time, a substantial minority of slaves and free blacks were assigned to work the water instead, transporting timber and building ships. It was boom times for the local shipbuilding industry back then.

Bowley worked in shipbuilding, and as a blacksmith. He was part owner of a schooner, too. That work put him square in the middle of the commercial superhighway that ran along the Choptank River, out to the Chesapeake Bay, and up to Baltimore and other big ports.

During the heyday of the Underground Railroad those waterways came to serve as something of an information superhighway as well, with a far-flung network of black dockworkers and sailors surreptitiously spreading news among would-be runaways and their conductors and station masters.

STORY: Flight from the Auction Block

Born a slave sometime around 1815, John Bowley had family roots in the countryside outside of Cambridge, along Harrisville Road and very near the likely site of a long-gone cabin where Harriet Tubman was born. Their families almost certainly knew each other back in that area, which is known as Peter’s Neck.

John’s owner was a man named Levin Stewart, who belonged to a powerful, prosperous family whose fortunes centered on the sprawling shipbuilding facilities then operating in Madison, a few miles below Cambridge off of the Little Choptank River.

While John was still a little boy, Stewart decided to free his slaves through a legal process known as manumission. This generally involved filing court papers that set specific dates and ages off in the future for when this slave or that one would become legally free.

Manumission was not standard practice among slave owners in those years, but neither was it all that unusual. Some owners freed slaves out of a moral sense that human bondage was wrong, something encouraged by several Methodist preachers in the area. Others used manumission for more selfish reasons, saving themselves the expense and trouble of caring for slaves who were too old or ill to work.

It seems likely that Levin Stewart acted out of good intentions. He had a lot of options, after all. He could have made good money selling his slaves on the open market. Or he could have turned them over, still in bondage, to other members of his family.

Instead, he freed them, one and all, over time. John Bowley became a free man at about the age of 30. By the standards of slavery times, he had enjoyed a rather privileged upbringing up to that point. He entered freedom well equipped with an array of skills that were valuable in the local economy—sailing, shipbuilding, and blacksmithing among them. 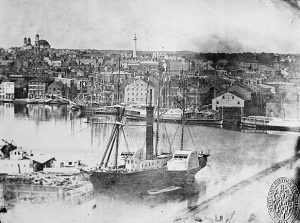 John and Kessiah Bowley sailed to Baltimore in 1850. This is how that city’s Inner Harbor looked in 1849.

Despite his newfound legal status, however, John was not completely free and clear from the bonds of slavery. His wife, Kessiah, remained a slave. Mixed marriages like this were not uncommon, but they were complicated. Slavery was a matrilineal affair, so any children that John and Kessiah had would belong by law to Kessiah’s owner.

This is what brought John back to the very same courthouse where Levin Stewart had filed the manumission papers that made John a free man. He was 34 years old on the December day in 1850 when his wife and two young children, James and Araminta, were slated to go up on the auction block outside the courthouse.

Here, too, John was luckier than most of his fellow slaves. Kessiah just so happened to be the niece of Harriet Tubman—in fact, the two women were so close in age that they regarded each other almost as sisters. It’s possible that Kessiah and John named their daughter in honor of Tubman, whose name at birth and through her younger years was also Araminta.

Aunt Harriet had escaped slavery the year before, in 1849, and she had decided from the moment she crossed into freedom that she wanted to help her loved ones find their way out of bondage as well. In fact, this would be the very first time Tubman tried to arrange an escape. She was most likely living in either Philadelphia or Cape May, New Jersey at the time, and she presumably received word by way of that surreptitious information highway in the maritime world that Kessiah was headed to the auction block.

Somehow, she and John managed to trade messages and work up the outline of a last-minute plan. Tubman did not come back to Cambridge on this mission. Instead, she made her way to Baltimore and left John in charge of running the scam they had cooked up. 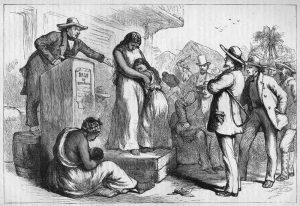 When Kessiah and the children went up on the block that day, John was the one who placed the winning bid. This was not necessarily something that would have raised suspicion among the local whites. Some free blacks in those days managed to save enough money to buy loved ones out of slavery.

The problem was, John didn’t have the money to back up his bid. What happened next is like something out of the Hollywood movie, “The Usual Suspects.” The auctioneer closed the bidding and confirmed that John was the winner. Then that auctioneer announced that he was taking a lunch break.

That break was a very convenient turn of events for John Bowley, one that has always left me wondering: Did someone slip that auctioneer a bribe? Is there any chance in the world that the auctioneer was sympathetic to the plight of the Bowleys and did them a favor? Such questions are impossible to answer.

What we can say is that people started walking away once the auctioneer left for lunch. John, Kessiah, and the children joined the exodus. Somehow, they managed to melt into the crowd and fade away altogether.

When the auctioneer returned from lunch, he called for payment on John’s winning bid for Kessiah and the children. No one stepped up. Later in life, Tubman and the Bowleys would say only that Kessiah, John, and the children were at that point hiding in a house within five minutes of the courthouse.

When the Bowleys emerged from their hideaway, they made their way to a sailboat—there is no telling whose boat it was, or how they came to commandeer it. December is a risky time, weather-wise, to sail from Cambridge to Baltimore, but John was an experienced mariner. Once they got to Baltimore, Aunt Harriet was there to lead John, Kessiah, and the children up through Philadelphia and on to freedom in Canada.

TESTIMONY: Workings of the Grapevine

Booker T. Washington won renown in the late 1800s as an educator, author, and advocate for black-owned businesses. Born in Virginia in 1856, he spent the first few years of his life in slavery. Later, as an adult, he recalled how slaves kept each other abreast of important news during the Civil War.

He is talking here about the workings of an informational grapevine inside of a single plantation, but it’s easy to imagine the same sort of network in place across a bigger area, even one as big as the shipyards and ports of the Chesapeake Bay.

“Often the slaves got knowledge of the results of great battles before the white people received it. This news was usually gotten from the coloured man who was sent to the post office for the mail… The man who was sent to the post office would linger about the place long enough to get the drift of the conversation from the group of white people who naturally congregated there, after receiving their mail, to discuss the latest news. The mail carrier on his way back to our master’s house would as naturally retell the news that he had secured among the slaves, and in this way they often heard of important events before the white people at the ‘big house,’ as the master’s house was called.”

John Bowley’s call to duty along the Underground Railroad did not end with freedom for his family. It didn’t even end with the freedom of slaves all over the country at the end of the Civil War.

He and Kessiah eventually had seven children. The couple returned home to Dorchester County after the Civil War with most of those children in tow, settling in the black community that was then centered along Old Field Road in the Church Creek area.

There, John and Kessiah learned that blacks still faced all manner of discrimination and oppression, even after emancipation. Slave owners could be quite a crafty lot, and some of them played fast and loose with the rules of indenture and apprenticeship, basically transforming those legal arrangements into a new kind of slavery.

One of Harriet Tubman’s brothers had two sons caught up in this kind of predicament. And so twice in the latter part of the 1860s, John Bowley sailed across the Choptank River over to Trappe, in Talbot County. He rescued first one and then another of those boys, and then he and Kessiah helped them make their way up to Auburn, New York, where they were reunited with their father after many years apart.

Kessiah passed away in 1897. She was in her early 70s. Her will made John a beneficiary of her estate, so he must have lived on after her. No one seems to have located a record of his death yet.

(2) The two young men that John Bowley rescued from Talbot County in the late 1860s were the sons of Tubman’s brother Robert Ross, who adopted the name John Stewart in freedom. The story of Robert’s flight from bondage with two other brothers is told in three parts in Chapter 5, Chapter 7, and Chapter 14.

(3) The Dorchester County Courthouse is located at 206 High Street in Cambridge, Maryland. There is an interpretive sign about the Underground Railroad outside the building, along with a kiosk offering brochures and travel information.

(4) The courthouse is right in downtown Cambridge, where there are a good number of shops, restaurants, and attractions. Information about things to do and places to go in and around Cambridge is available from Dorchester County Tourism. The Dorchester Visitor Center is at 2 Rose Hill Place, Cambridge, Maryland

(5) The Harriet Tubman Underground Railroad Byway runs through both Dorchester and Caroline counties in Maryland and then on into Delaware.