My latest writing project is something I’m calling “Tubman Tales,” though it focuses on more than just Harriet Tubman. Case in point: This chapter is about the life of a young slave in Talbot County named Fred Bailey, who is better known in the history books as the famous anti-slavery orator Frederick Douglass.

Young Fred Bailey got his first taste of freedom when he was still too young to understand that a thing such as slavery even existed. Later in life, he would describe the freewheeling nature of his first few years by comparing the life of a hypothetical slave child with that of a white counterpart:

[The slave child] seldom has to listen to lectures on propriety of behavior, or on anything else. He is never chided for handling his little knife and fork improperly or awkwardly, for he uses none. He is never reprimanded for soiling the table-cloth, for he takes his meals on the clay floor. He never has the misfortune, in his games or sports, of soiling or tearing his clothes, for he has almost none to soil or tear. He is never expected to act like a nice little gentlemen, for he is only a rude little slave. …

He literally runs wild; he has no pretty little verse to learn in the nursery, no nice little speeches to make for aunts, uncles, or cousins, to show how smart he is, and if he can only manage to keep out of the way of the heavy feet and fists of the older slave boys, he may trot on, in his joyous and roguish tricks, as happy as any little heathen under the palm trees of Africa. …

In a word, he is, for the most part of the first eight years of his life, a spirited, joyous, uproarious, and happy boy. 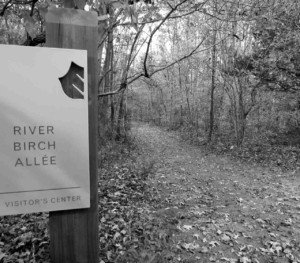 One of the trails at Adkins Arboretum

Little Fred passed these carefree years at Holme Hill, a farm in the countryside below the modern-day town of Queen Anne. Historians place that site a little ways southeast of the current intersection of Lewistown and Tappers Corner roads, but there is nothing really to see there. The farmhouse of Fred’s owner, Aaron Anthony, is gone. So is the cabin where Fred lived with his free grandfather, Isaac Bailey, and his enslaved grandmother, Betsy. The land is all privately owned in any case, so there is no opportunity to get out of a car and wander around.

For a taste of the freedom that young Fred Bailey enjoyed, I would recommend instead a visit to either or both of Tuckahoe State Park and Adkins Arboretum. In these adjacent parks a little bit north of Queen Anne, you’ll be able to take in the beauty of Tuckahoe Creek and wander the nearby woods and streams. It’ll be easy to imagine the life of a little boy in the 1830s who spends pretty much all of his time wandering this paradise in search of fun and adventure.

Here, too, it will be easy to picture a little cabin in the woods:

The old cabin, with its rail floor and rail bedsteads up stairs, and its clay floor downstairs and its dirt chimney and windowless sides … and that most curious piece of workmanship, … the ladder stairway, and the hole curiously dug in front of the fireplace, beneath which grandmammy placed the sweet potatoes in to keep them from the frosts, was MY HOME—the only home I ever had; and I loved it, and all connected with it.

Douglass did not recall spending much time in those years with his mother, Harriet, even though she, too, was working at Holme Hill much of the time. He was too young then to wonder at all about the fact that his skin color was several shades lighter than hers, a fact that has long stoked speculation—still unconfirmed, as far as I can tell—that he was the son of his owner.

Slowly but surely Fred started to get a sense for the ways of the world, including the notion that the freedom he enjoyed in those early years would be a short-lived affair. He heard about his older siblings, for instance, but he had never met them—they were all off at some faraway place called Wye House. His master, Aaron Anthony, was there, too, working as an overseer.

The Journey to Wye House

On a late summer day in 1824, Grandmammy Betsy packed up a few things and told Fred they were going on an adventure. At one point, Fred grew tired of walking, so 50-year-old Betsy hoisted him up on her shoulder, toting him like a “sack of wheat.” You can trace the 12-mile route they may have taken to Wye House along country backroads today—along Tappers Corner and then Cordova, Longwoods, Sharp, and Todd’s Corner roads before heading out towards Bruffs Island.

Fred must have been astonished at what he saw here. Wye House and its plantation was a place unlike most any other on the Eastern Shore, closer to a Deep South plantation than to the small family farms with a handful of slaves apiece that dominated elsewhere in the region. The two likely walked right past the grand entry lane reserved for the upper crust, with its elaborate ornamental gate and half-mile-long canopy of decorative trees ending at “The Long Green,” a broad expanse of meticulously manicured lawn.

They would have taken the service road that lays a little ways beyond that. It led through slave quarters that housed nearly 200 slaves and had a whole city’s worth of services—icehouse, blacksmith, carpenter, shoemaker, wheelwright, shipyard, windmill, milk house, and more.

Wye House, too, is privately owned and inaccessible to the public today, so there is no opportunity to get out and stroll the grounds. Instead, you might consider wandering by car through the backroads of Miles Neck. Some of the farms and estates you’ll pass have the look of old-time plantations. The small towns of Unionville and Copperville date their histories to earlier incarnations as slave quarter districts and free black communities from the time of Douglass and Tubman.

In Copperville, you can find a sign for Bailey Lane. The path it marks is just a little dirt affair, but the message it sends is about the deep roots that the family of Frederick Douglass has in the area—members of the Bailey clan are still living hereabouts today.

Upon arriving at Wye House after their long walk, Betsey introduced Fred to his siblings, a brother named Perry and sisters Sarah and Liza. He had heard of them, but he didn’t remember ever meeting them before. The children went off to play together, though Fred seems to have spent that time with his back to a wall, watching warily.

Then his grandmother was gone, headed back to Holme Hill without him. Fred howled in dismay at this realization. His brother Perry tried to console him with some fresh peaches and pears. Fred threw them to the ground and kept right on sobbing.

Things did not go well for Fred at Wye House. Interestingly, the bane of his existence was not some cruel slavemaster, but a fellow slave and family member, his Aunt Katy. The keeper of the kitchen, Katy either took a strong dislike to Fred or decided that he needed an extreme bit of tough love. She refused to give him enough food—and sometimes any food at all.

She looked the other way when other children pushed little Fred aside and stole his portion at mealtimes. Things got so bad that Fred endured desperate moments spent fending off dogs for scraps of leftovers and foraging in creeks for raw shellfish.

Unlike Aunt Katy, the Lloyd family seems to have taken a liking to Fred. Out of the 80 or enslaved children on the plantation, he was chosen to be the special companion of young Daniel Lloyd. The two of them became fast friends for a time, exploring every nook and cranny of the farm together.

A Mother to the Rescue

Some six months into Fred’s time at Wye House, Harriet Bailey came to visit her son. It’s possible that this was the occasion of the boy’s seventh birthday, in February 1825. Fred may not have spent much time with his mother up to that point, but he knew enough to trust her with an unvarnished account of his long mistreatment at the hands of Aunt Katy.

I shall never forget the indescribable expression of her countenance. There was pity in her glance at me, and a fiery indignation at Aunt Katy at the same time.

Harriet consoled her son by giving him a piece of ginger cake. Then she turned to Aunt Katy and delivered a blistering rebuke, threatening to tell all to her master and condemning her for the “meanness” and “injustice” she had doled out to the child.

That night I learned the fact that I was not only a child, but somebody’s child. [I felt] prouder, on my mother’s knee, than a king upon his throne.

When he woke up the next morning, his mother was gone. He would never see her again. The adult Frederick Douglass never knew his exact age, or the date of his birthday. After finding his way to freedom, he chose to celebrate the event each year on Valentine’s Day, because he recalled how that piece of ginger cake his mother had given him was cut in the shape of a heart and that while holding him in her arms that night his mother had called him her “Valentine.” 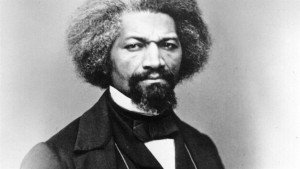 A few months after his mother’s memorable visit, another keystone event took place in the life of young Fred Bailey. Word spread through the Bailey clan that two of their members, Jenny and Noah Bailey—they were Fred’s aunt and uncle—had escaped from Holme Hill and were trying to make a run for freedom in the north.

Historians who have looked into the case speculate that the couple knew, or at least suspected, that Aaron Anthony was about to put them up for sale. I find it impossible to imagine the turmoil that went into their decision to leave behind two small children, seven-year-old Mary and six-year-old Isaac.

Anthony posted a reward of $150 for Jenny and Noah, but they were never caught. Perhaps in reprisal for the couple’s escape, Anthony soon sold those two young children to a slave trader from Alabama.

In time, word filtered back to the Bailey clan through an early version of the Underground Railroad grapevine that Jenny and Noah had indeed made it to the north and freedom. Looking back on this momentous turn of events in later years, Douglass would see their escape as a first step on his own long journey to freedom. It was the first time he had ever heard that there were places where slaves could become free.

The success of Aunt Jennie and Uncle Noah in getting away from slavery was, I think, the first fact that made me seriously think of escape for myself. … Young as I was, I was already, in spirit and purpose, a fugitive from slavery.

NOTE: The photo up top here is not directly related to the Bailey family or Frederick Douglass. It’s a rare image of an enslaved family that was taken somewhere in Virginia, but it seemed to me to fit with the story here. 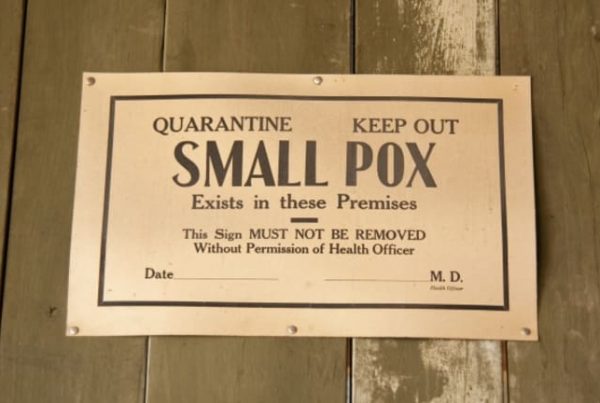 TUBMAN TRAVELS: The Strangers Who Risked Everything for Sam And Emeline Hawkins