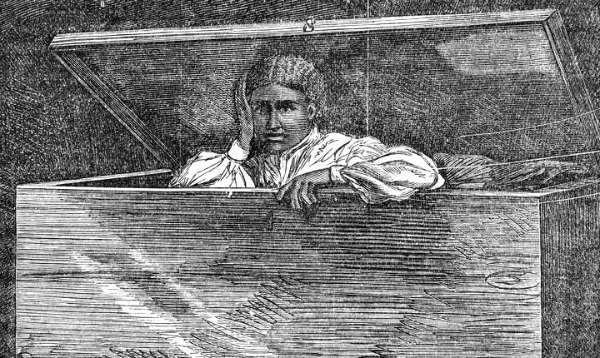 This story of Lear Green’s escape from slavery is a free excerpt from my book, Tubman Travels: 32 Underground Railroad Journeys on Delamarva. More info about the book here.

Before 1829, boats bound for Philadelphia from the Chesapeake Bay had to take the roundabout route, sailing down to the mouth of the Bay and then circling back up along the Atlantic Coast, into the Delaware Bay, and, finally, up the Delaware River.

The opening of the Chesapeake & Delaware Canal that year on the upper reaches of the Delmarva Peninsula made things much easier. A 14-mile straight shot between the Elk River on the west and the Delaware River on the east, the C&D Canal slashed some 300 nautical miles and 15 hours of time off a trip between Baltimore and Philadelphia.

Those savings diminished from points farther south, of course, but the canal route had a couple of other things going for it. The Chesapeake Bay had lots of sheltered harbors to offer in bad weather, so it was a safer sail. It also had more ports of call, with each one offering boat captains the possibility of extra profits by way of deliveries and pickups. Quite a few boats taking this new route across the upper Delmarva Peninsula had passengers aboard as well. Some of those passengers were slaves trying to find a way to freedom.

THE STORY: Love Comes in a Box

Back in 1850, William Adams fell head over heels for one gritty young girl. A free black barber in Baltimore who also worked shucking oysters in the city’s taverns, he was a soft-spoken young man with a four-inch scar running up his cheek from a corner of his mouth. There is no telling how he came by this mark of distinction.

The object of his affections was Lear Green, a pretty, round-faced girl of 18 who was blessed with what one man who met her described as “a peculiar modesty and grace.” She was a slave, owned by a butter merchant in the East Baltimore neighborhood of Old Town.

Adams proposed. Green said no. It wasn’t that she didn’t love him. Rather, she had decided not to bear any children into bondage. With the status of slaves passing through mothers in those days, she simply wasn’t going to marry anyone, at least not while enslaved.

This would have been the end for most affairs, but Adams seems to have been a man of uncommon determination. He soon asked his mother to come down from New York City and run point on an escape that should be much more famous than it is.

One good place to stop and think about Lear Green’s voyage to freedom is in Chesapeake City, a pretty town of 700 in Cecil County, Maryland. It’s home to the C&D Canal Museum if you’re interested in the workings and history of the waterway. The last time my wife and I were up this way, we brought along bikes and rode a stretch of the first-rate strolling/cycling path that runs along the north bank of the canal between Chesapeake City and Delaware City, another pretty little town that’s well worth a visit.

Upon arriving in Baltimore, William Adams’s mother bought a ticket aboard a steamship for Philadelphia. Among the bags she checked that day was an old sailor’s chest with Lear Green curled up inside. I haven’t come across an account that includes a first name for this Mrs. Adams, but I can say that she was putting her own freedom at risk. Free blacks who got caught aiding runaways were sometimes sentenced to be sold into slavery for the rest of their lives.

At this point, the business of the ships running through the canal was focused primarily on cargo. Passengers like Mrs. Adams were an afterthought. She didn’t have a stateroom, or even an assigned seat. She had something more like a general admission pass to the deck, which put her right in the midst of all that cargo.

During the night, Mrs. Adams found her way to the crate that held her wannabe daughter-in-law at least once and perhaps twice. She untied the ropes binding the box closed and lifted the lid to let in a little fresh air and “see if the poor child still lived.”

There is no surviving account from Lear Green herself about what it was like being cooped up in that chest. But we can get a sense for her ordeal through a man who made the same sort of journey through this same canal aboard the same sort of ship nine years later, in 1859.

William Peel’s journey to freedom began in Baltimore, too. The 25-year-old was enslaved by Robert H. Carr, a grocery store owner who had gotten into the habit of selling off slaves like so many bags of flour. Convinced that he would be the next one to go, Peel asked a free black friend to pack him in a box and put him on a steamship to Philadelphia.

The first misfortune that struck Peel during that journey was an excruciating cramp. It was so painful that he “had his faith taxed to the utmost—indeed was brought to the very verge of ‘screaming aloud’ ere relief came.”

After the cramp passed, “faintness” and “exhaustion” came over him in such a wave that he feared he was about to die. When Peel finally came out of that haze, a third trial arrived, this one a “cold chill” that seemed “to freeze the very blood in his veins and gave him intense agony.”

THE AFTERMATH: ‘None Deserve More Praise’ Once in Philadelphia, the sailor’s chest where Green was curled up got loaded onto a carriage and taken to the home of a friend of Mrs. Adams. Someone involved in this plot had managed to make the right connections by this point, because the crate was then forwarded via another carriage to William Still at the office at the American Anti-Slavery Society. There, at long last, the 18-year-old emerged.

Such hungering and thirsting for liberty, as was evinced by Lear Green, made the efforts of the most ardent friends, who were in the habit of aiding fugitives, seem feeble in the extreme. Of all the heroes in Canada, or out of it, who have purchased their liberty by downright bravery, through perils the most hazardous, none deserve more praise than Lear Green.

Lear stayed with Still for several days, until she had recovered enough from her ordeal to travel north to meet Adams. The couple did indeed get married, settling in the town of Elmira, New York.

I wish I could report that Lear and William enjoyed a long, fruitful marriage, but alas, Lear passed away three years later at the age of 21. The cause is unknown. The mother-in-law who risked everything to bring Lear north also died at about the same time. I haven’t come across any reports about what became of Adams in the years after that. As for William Still, the brief encounter he had with this trio made quite an impression on him. When he published a book-length version of his journals recounting meetings with hundreds of different runaways over the years, he singled out Lear Green as someone with “a strong claim to a high place among the heroic women of the nineteenth century.” He even kept the chest that carried her along the C&D Canal as a keepsake of that heroism.

NOTE: This is an excerpt from Tubman Travels: 32 Underground Railroad Journeys on Delmarva. The chapter of the book where this story appears also includes a second story detailing the exploits of two white schooner captains who hid runaway slaves in false-bottom compartments while piloting their vessels through the C&D Canal, as well as a collection of travel resources to help you discover interesting things to do and see while visiting Chesapeake City and the surrounding area.

More information about Tubman Travels, including details on where you can buy a copy, is here.