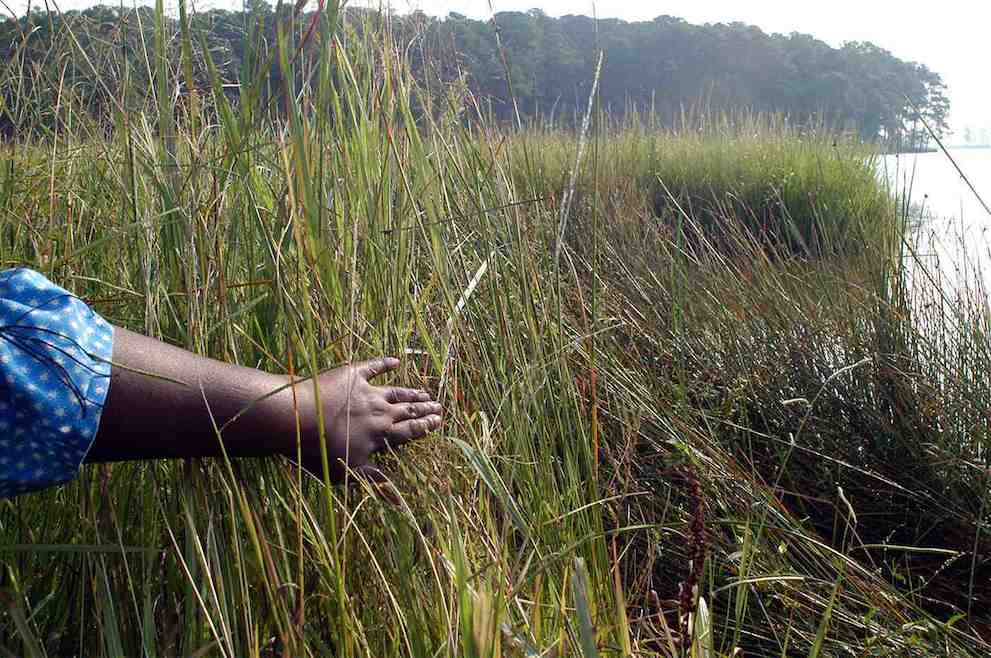 This is an excerpt from my book, Tubman Travels: 32 Underground Railroad Journeys on Delmarva. It’s the third of three chapters in the book devoted to The Christmas Escape of 1854, one of the most famous of the escapes engineered by conductor Harriet Tubman. Each chapter in the book is a self-contained story that’s linked to a place you can visit today in Delaware or on Maryland’s Eastern Shore, but the stories are also perfectly fit for armchair reading in the comfort of your home.

No one knows the exact location of the cabin where Rit and Ben Ross, the parents of Harriet Tubman, lived from the late 1840s through the mid-1850s, except to say that it was in the area of Maryland’s Eastern Shore known then and now as Poplar Neck. The nearby town of Choptank is the place to go and think about what a big role that little cabin played in the life of Harriet Tubman.

It’s fitting that Tubman relied so heavily on the home of her parents in her work as a conductor. There were a good number of strangers and vague acquaintances among the seventy or so slaves she led to freedom, but they were not the primary reason Tubman signed on to work along the Underground Railroad in the first place.

First and foremost, she was in it for family. She told her biographer, Sarah Bradford, that the jubilation she felt after her own escape was tempered by a bittersweet aspect of homesickness.

I had crossed de line of which I had so long been dreaming. I was free, but dere was no one to welcome me to de land of freedom. I was a stranger in a strange land, and my home after all was down [in Maryland] wid de ole folks, and my brudders and sisters.

There are many things about Tubman’s life that remain mysterious today, but the source of her extraordinary devotion to family is not one of them. Later in life, Tubman told a story about her mother from the days when Tubman and her siblings were still young—the family was living below Cambridge, Maryland at the time.

A slave trader from Georgia showed up one day and cut a deal with Rit’s owner, Edward Brodess, to buy a boy named Moses. Moses was Rit’s youngest son, and Tubman’s little brother. Rit grew suspicious about this situation straight away. After catching a glimpse of Brodess counting up some money and then ordering one of his other slaves to go and fetch Moses, she leaped into action.

Darn if that boy didn’t all of a sudden go “missing,” and then stay that way for perhaps a month. Moses would sleep in the woods one night, with a friend the next, and who knows where on the one after that. A network of family and friends helped Rit get messages to the boy and deliver his meals.

Eventually, however, one of those helpers betrayed the game, telling Brodess where he could find the boy. But even then, Rit managed to stay a step ahead of the white men. When Brodess and that slave trader appeared at the spot where their source had told them they would find Moses, there was no sign of the boy.

The men decided to pay a call at Rit’s cabin in an effort to resolve the situation.

“What do you want?” Rit asked them.

“Mr. Scott wants to come in and light a segar,” Brodess answered.

Rit “ripped out an oath” and then said, “You are after my son; but the first man comes into my house, I will split his head open.”

Brodess eventually backed down and canceled the sale of Moses.

That story makes it easy to see where Tubman came by her intense devotion to family, doesn’t it? And it probably goes a long way toward explaining where she came by her uncommon reserves of courage, too.

STORY: A Mother’s Love Is a Mysterious Thing

Yes, a mother’s love can fill a heart with the kind of courage that Rit showed when she feared losing her son to a slave trader. But it can also be a source of weakness—or at least that was the thinking of Tubman, her father, and three of her brothers during the Christmas Escape. 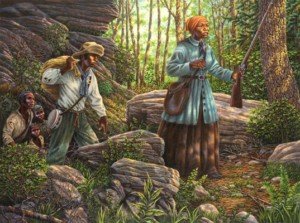 This was, arguably, the most eventful undertaking of Tubman’s career as a conductor. The advance preparations for the December 1854 rendezvous that is the focus of this story were complex, emotionally wrenching affairs that are detailed in two other chapters of this book.

This third part of the story picks up here, at Poplar Neck. The drive back into Maryland from our previous stop in Seaford, Delaware is a two-lane affair dominated by farmland and dotted with small stands of trees. Poplar Neck is just below the town Preston, at the point where Choptank Road ends in a town of the same name.

There are no shops or amenities here—fewer than 100 people call it home—but you will find a postcard-pretty marina and a sweeping view of the river. The marina has a couple of markers that commemorate the importance of nearby Poplar Neck during Underground Railroad times. If you are looking at the river, Poplar Neck is to the north, upriver on your right-hand side. The cabin where Ben and Rit lived was most likely a one-room affair built of logs hand-hewn by Ben with a little help from friends. Its little loft would have been accessible by ladder rather than stairs.

A free man at this point, Ben was working during his Poplar Neck years in the timbering operations of Dr. Anthony C. Thompson, the son of his former owner. Thompson owned some 2,000 acres hereabouts.

Harriet Tubman probably stopped here during her own run to freedom in 1849. She likely used her parents’ cabin as a station during at least three other escapes as well. Other slaves made their way north with Ben’s help, too—it’s impossible to say how many.

This whole area was a hotbed of Underground Railroad activity. Another station master, the free black Rev. Samuel Green, lived five or so miles away in East New Market. A third station was located just up the road near Preston in the home of a white Quaker family, the Levertons. (That home is still standing along Seaman Road, but it’s privately owned and not accessible to the public.)

The scene to imagine on Poplar Neck is Christmas Eve, 1854. Robert Ross was probably the last of Harriet’s three brothers to arrive, after somehow managing to tear himself away from his wife and newborn child to join in the escape attempt. Along with Ben and Henry Ross, he was running under a frightful deadline, as all three brothers were slated to go up on the slave auction block the day after Christmas.

Rit must have been going about her preparations for Christmas dinner that day with quite the mix of anticipation and trepidation. How long had it been since she last saw her sons? Those sons were enslaved, after all, and lived some 25 miles away. Opportunities for family reunions in those circumstances must have been few and far between.

Then there was the matter of that auction looming ahead. Perhaps a local buyer would scoop the brothers up, allowing them to stay in the area. But perhaps not: Years earlier, three of Rit’s daughters had been sold to out-of-state owners and shipped into the Deep South, never to be seen again. 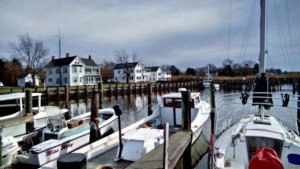 The marina in Choptank, Maryland

Would this Christmas dinner be the last time she saw these three sons?

This is where that business about a mother’s love comes in. Ben Ross and his four adult children made a decision that day to keep Rit in the dark about the escape that was in the works. Years later, they talked about this decision by describing how they were worried that Rit would not be able to keep her emotions in check. They thought she might raise such an all-out ruckus of grief over this unexpected farewell that it would draw unwanted attention to the cabin.

Tubman and the brothers hid from her in a little outbuilding that served as a corncrib. There, they watched through a crack in the door while their mother prepared the Christmas dinner they would not be sitting down to eat.

Perhaps Ben, Tubman, and the brothers were worried, too, about whether Rit would hold up under questioning once the brothers’ owner alerted local authorities that Robert, Ben, and Henry had gone missing.

After all, Ben was worried about his own ability to deal with those questions. He put on a blindfold that Christmas Eve every time he came near Harriet and the brothers. When it came time for them to start making their way to the next station, he walked blindly with them for a bit, removing the covering from his eyes only after they were all out of sight.

Those investigators did show up asking their questions soon enough. And in response, Ben told them the truth: He hadn’t seen his sons at all around Christmastime.

In the books and essays about Tubman that I’ve read, this story is presented as a triumphant tale. It does have a happy ending, after all—the brothers all made it north to Canada in the end. Ben’s cleverness with that blindfold business is something to celebrate as well.

But then there is Rit, and she is why this story always leaves me with a nagging bit of sadness. It leaves me imagining the way she toiled away on that Christmas dinner, so full of anticipation over the coming gift of time together with three sons who would soon be headed up on the auction block.

Then those sons failed to show up. And then there are Ben and Rit, eating that holiday dinner alone. I imagine that Ben is feeling a need to keep lying to his wife by saying he has no idea what’s up with Ben, Robert, and Henry. And I imagine that Rit’s heart is breaking a little bit more with each passing minute of Christmas Day.

I am happy to report that Rit would get a chance down the road from that Christmas night to enjoy more reunions with her sons. In 1857, with Ben at risk of going to jail on charges that he was helping slaves to escape along the Underground Railroad,  Harriet returned to the Eastern Shore once again and helped her parents find their way north to Canada, where Rit and Ben were reunited with the three brothers who made their way North in that dramatic Christmas escape.

–The photo up top here is courtesy of Dorchester County Tourism.