Home / Miscellany / Young Harriet Tubman Finds Her Strength, With a Little Help from Her Father

This is an excerpt from my book, Tubman Travels: 32 Underground Railroad Journeys on Delmarva. A smidgeon of background: This story begins while an adolescent Harriet Tubman—her name in her younger days was Minty—is in the midst of a long recovery after suffering a near-fatal head injury when hit in the head by a hardware-store metal weight flung by a plantation overseer. (You can read the story of that injury and its lasting effects on the rest Tubman’s life here.)

Early in 2021, newspapers and television stations around the world published the exciting news that archeologists have likely found a cabin where Tubman’s father once lived. Tubman herself may have lived there, too. She certainly visited often. I am posting this excerpt to give readers a picture of what was going on in Tubman’s life during this period where the archeologists believe they have struck proverbial gold. (You can read a detailed media release about the archeological discovery here.)

Here is the book excerpt:

Minty’s owner, Edward Brodess, didn’t think much of the future prospects of his young slave in the wake of the injuries she suffered at the Bucktown store. He tried to sell her in this period, but who would pay good money for a slave girl who might be an invalid for a long time to come?

Brodess did find a way to get something out of his property eventually. In 1836, he hired Minty out to a man named John T. Stewart, which involved her moving out of Bucktown and back to the area around Peter’s Neck, where she had been born and where her father, Ben Ross, still lived. She would work for Stewart for the next six years.

The tasks she tackled in this period were as hard and physical as they come, but something about pitching in with all-male crews that chopped down tall trees, transported huge bundles of logs, and drove wagons powered by teams of unruly oxen seems to have been a powerful tonic for her fragile health. Later in life, she would speak with great pride about how she was able to hold her own in this male-dominated world.

The best place along Route 16 to stop and think about the years when Minty came of age is south of Madison, on the way to Taylors Island. There is a little bridge out there where the road crosses over a thin spit of water. The roadside sign there says, “Parsons Creek.” The shoulder here is wide enough to pull off to the side so that you can get out and give it a look.

The first thing you will see is that it’s drop-dead gorgeous out here. The marshlands and woods to the south are all part of Blackwater National Wildlife Refuge. The widening water on the other side of the road is heading off into the Little Choptank River, which, as you will see off in the distance, isn’t so “little” at all.

The sign identifying this as Parsons Creek is misleading, at least for our Tubman-travel purposes. This isn’t a “creek” at all. And it wasn’t called “Parsons” back in slavery times. This was Stewart’s Canal then.

The fact that it runs straight as an arrow is a giveaway to its unnatural origins. Mother Nature never goes about her work in the sort of straight line you see when looking up Stewart’s Canal, which was dug out over the course of decades by the human hands of slaves and free blacks. Its purpose was to facilitate the transport of logs out of Stewart-family-owned forestlands and into the shipyard in Madison. 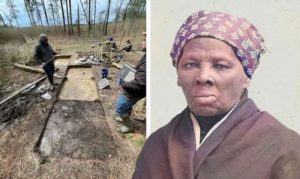 There is no telling for sure whether Minty or her father worked directly along the canal, perhaps transporting timber to its shores or along its waters. But the view from the little bridge will nonetheless fuel your imagination when it comes to the back-breaking nature of the work of the timbering industry back then.

Can you even imagine how bad the biting flies and monstrous mosquitoes were out there in the warmer months? Can you imagine what a relief it must have been to relax and chat with her father at his modest cabin at the end of such a long day of laboring?

–posted by Jim Duffy on May 31, 2021 for Secrets of the Eastern Shore/Whimbrel Creations, LLC. All rights reserved.

• This chapter in Tubman Travels continues on, following Minty as she gets married and changes her name to Harriet. She then finds herself at risk following the death of her owner: Will his heirs sell her off to cover that owner’s debts, shipping her away from her new husband and her beloved father? These fears and doubts would fuel Tubman’s bold decision to take off in search of freedom from slavery. More about Tubman Travels and my other books here.

• The photo up top here shows a cabin from slavery times that is located in Caroline County, Md. Read the story of that cabin in another excerpt from Tubman Travels here. The photo towards the bottom shows Tubman on the right and the archeological dig on the left. It accompanied the media release I linked to above.

• Thank you for spending time with this story! If you are interested in more along these lines, sign up for the Month of Fundays newsletter, which includes links to my storytelling work as well as to Jill Jasuta’s Delmarva photography. The newsletter also connects you with the best fun events and happenings coming up on the Delmarva Peninsula. Sign-up links are at the bottom left of most every page on this site.