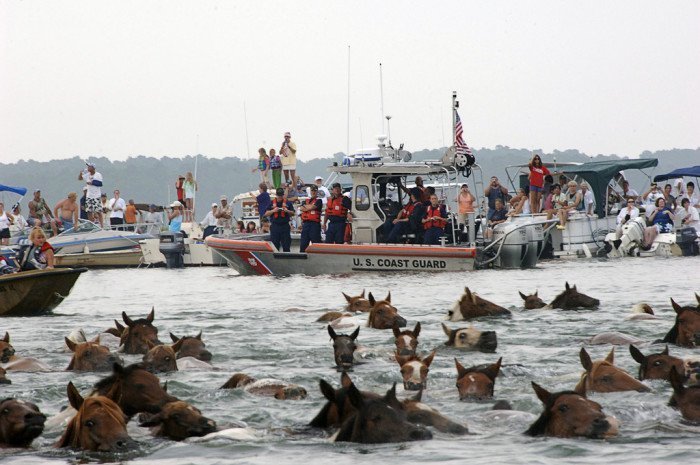 Tracing the History of the Famous Pony-Penning Party in Chincoteague

Before I did a little research, I assumed that the Chincoteague’s big annual pony-penning festival became a big deal only after 1947, the year Marguerite Henry published “Misty of Chincoteague.” That story, of course, became a children’s classic and then a Hollywood movie.

But it turns out that the story of pony-penning day actually dates back centuries, not decades. Local historians say that the earliest known mention in writing of such an event dates to 1835. But even back then the pony penning was described as an “ancient” island custom.

The speculation, then, is that pony penning dates to sometime in the 1700s. It turns out that this civic party is probably older than our country.

The modern version of the pony-penning day dates to 1925. That year, in the wake of a string of bad fires, townspeople launched a volunteer fire company and authorized it to raise funds with a summertime carnival. Somebody got the idea that year to ask some local horse owners to auction off some ponies to help pay for new fire equipment. 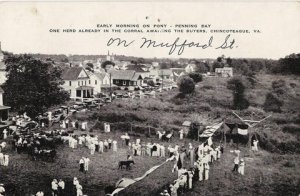 The postcard here is from 1930. It shows Mumford Street packed with parked cars. A good number of spectators are wandering around the corral. According to the fire company, the crowd that rolled into town for the 1937 edition of the pony penning was 25,000 strong.

By the time Misty was published a decade later, the fire company had started purchasing ponies and establishing its own herd. That’s the way things still stand as of this year. The 93rd annual pony swim is coming up on Wednesday, July 25, 2017, and there is a whole week of festivities and events planned starting on Saturday, July 21. Here is the schedule.

One last note: Every Monday through October the Island Theatre in Chincoteague is showing the classic old Hollywood version of “Misty”—it’s a real treat if you love those Misty of Chincoteague books! Here is the theatre’s website.

• Here is a related story that is one of the most popular ones on this website: “The True Story of Misty, Stormy, and Maybe the Worst Nor’easter of Them All.”

• If you would like tourism information about Chincoteague, you can find it here on the Chamber site.