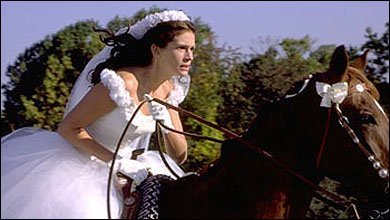 Why is the Town Played by Berlin in the Movie “Runaway Bride” Called Hale?

Home / Destinations / Natural Wonders / Why is the Town Played by Berlin in the Movie “Runaway Bride” Called Hale? 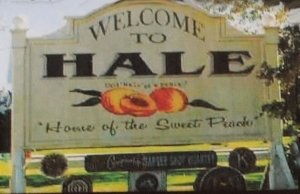 Since the subject at hand is peaches, we might as well start with the bit of “Runaway Bride” trivia highlighted in the headline here. The name Hale, you see, is actually a sly tribute to a tasty little slice of Eastern Shore history.

Released in 1999 and starring Julia Roberts and Richard Gere, “Runaway Bride” was filmed in Berlin. Berlin, in turn, was home back in the first part of the 20th century to an operation called Harrison Farms, which just so happened to be one of the largest fruit tree operations in the whole country. (The company’s long and successful run came to an end when it closed in 1962.)

Back in the company’s heyday, the most famous Harrison product of them all was the Hale Peach, named after a family member, G. Hale Harrison. And yes, that is where the town in “Runaway Bride” got its name. 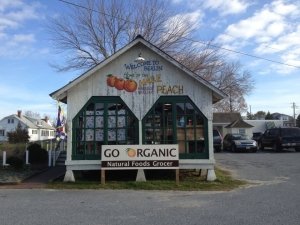 The next time you’re in Berlin, you might consider checking out another tribute to this particular slice of local history. Find your way to the Baked Dessert Cafe on Bay Street. Back in 2010, the City Council in Berlin proclaimed the Cafe’s Peach Dumpling the town’s official dessert. Behind the main drag on Artisan’s Way you will also find the bit of Hale-peach-tribute signage at the left here on the outside of the Go Organic grocery shop. 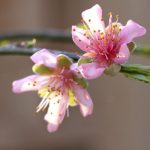 Berlin isn’t the only place in our region with an historical penchant for peaches. They were big in central and southern Delaware, too, which is why the peach blossom is that state’s official flower. Peach trees first arrived in Delaware in the 1500s, aboard Spanish trading ships. By the 1600s the fruit was so plentiful that farmers were feeding excess peaches to their pigs.

By 1875, Delaware was producing 6 million baskets of peaches a year. The number of peach trees in the state around that time topped 4 million.

It all went south when a mysterious blight called “the yellows” appeared and began spreading quickly. By 1900, there were only 2.4 million peach trees in Delaware. By 1920, that number was down to a paltry 300,000. As you might imagine, a whole bunch of farm families endured hard times as a result.

Nowadays Delaware farms produce about 1,000 tons of peaches a year. That may sound like a lot, but it really isn’t—the leading producer of peaches, California, produces some 950,000 tons a year. 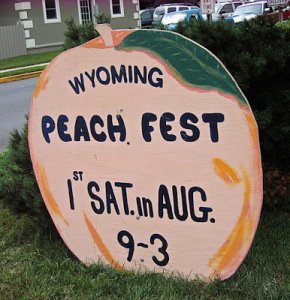 Still, there tend to be local peaches aplenty at farm markets on the Eastern Shore and in Southern Delaware come late July and August. And the history of local peach farming is celebrated at several civic festivals around the area. 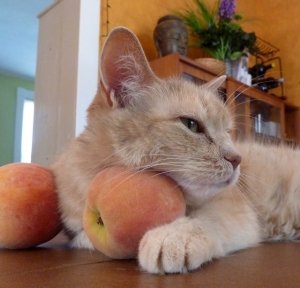 • This peachy post seems the right occasion to show off one of my all-time favorite photos of our shy and adorable cat, Smudge. As you can see at left, Smudge took a real liking to peaches one summer a few years back.

The photo here is by Jill Jasuta Photography, of course. Don’t forget that Jill’s gorgeous photos of Eastern Shore scenes are available in the Shore Store as prints and greeting cards.