The Lighthouse Tour: Six Beacons of History on the Eastern Shore and in Southern Delaware

Home / Road Trips / The Lighthouse Tour: Six Beacons of History on the Eastern Shore and in Southern Delaware

Something in the sight of an old lighthouse makes many people go weak at the knees. The stately and iconic old beacons evoke wistful, romantic feelings tied to the beauty of waterfront vistas, the stately masts of old-time boats, the rugged lifestyle of keepers and their families—all mixed in with a touch of the danger, with legends of storms and shipwrecks also coming to mind.

This road trip circles the Delmarva Peninsula and serves up six stops where you can find that weak-at-the-knees feeling. There are five lighthouses and one lightship open to visitors on the Eastern Shore and in Southern Delaware.

Let’s start up at the top of the Shore in Cecil County and work our way down and around from there. Turkey Point Light is unusual for two reasons. First, at just 35 feet tall, it’s a bit of a midget by lighthouse standards. But it stands atop a 100-foot bluff, and so from a sailor’s perspective out on the water, it’s actually the tallest light on the Bay. 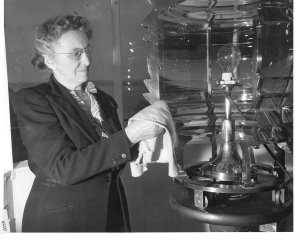 Second, there is a cool bit of women’s history to this lighthouse. Four different women were keepers here, and they all served a long time—in fact, for 89 of the 115 years the lighthouse operated in total, the keeper was a woman. This picture shows the last of them, Fannie May Salter—she took over after the death of her husband and served from 1925 until the light was automated in 1947.

Erected in 1833, Turkey Point was built to help vessels find their way up the Elk River and into the then-new Chesapeake & Delaware Canal. Today, it stands in Elk Neck State Park and reaching it involves a 1.6-mile round-trip stroll through the woods. Yes, you can climb up top and take in the gorgeous view of the Upper Bay. As of this writing, it’s open on weekends in the warmer months. Here is the Turkey Point Lighthouse website.

Head down the Delaware Coast for a bit and you will find your way to Lewes and the Lightship Overfalls. The United States Lighthouse Service and, later, the Coast Guard had 179 floating lighthouses built between 1820 and 1952. Only 17 still exist nationwide—and just seven of those are open to the public. 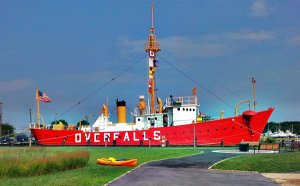 Now a National Historic Landmark, the Lightship Overfalls was known during its working life as LV-118. It was stationed in various New England locations between its construction in 1938 and retirement in 1972. The local historical society in Lewes inquired about LV-118 because it wanted to pay tribute to the old lightship that had marked the center of the shipping channel at the mouth of the Delaware Bay between 1898 and 1960. The Coast Guard agreed to give LV-118 to the historical society in 1973.

Now docked in the canal right close to downtown, it is operated by the nonprofit Friends of Lightship Overfalls. It’s open for tours five days a week at this writing. The light is 57 feet above the waterline and can be seen for 12 miles. On New Year’s Eve, they do an “Anchor Drop” here at midnight. Here is the Lightship Overfalls website.

There may be another lighthouse attraction in Lewes someday soon. Green Hill Light used to stand two miles north of town. It was built in 1881 and then discontinued in 1918. Eventually, it got moved to Gasparilla Island, Florida. But the keeper’s house and the oil house are still here, though they are in dilapidated condition. For more than a decade now, there has been talk of rescuing them and incorporating them as an attraction on an expanded greenway around town—but it hasn’t happened yet. 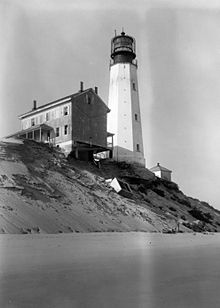 Heading south from Lewes you’ll pass Cape Henlopen State Park. The famous Cape Henlopen Light stood here between 1769 and 1926. It was the sixth lighthouse built in the colonies. British soldiers trashed the place during the Revolutionary War. It eventually fell victim to the shifting sands of the dunes, being declared unsafe in 1925 and then toppling over into the sea during a storm the next year. If you’re interested, there is a neat replica of the lighthouse now standing in the center of the traffic circle that serves as a gateway into downtown Rehoboth Beach.

The Fenwick Island Lighthouse was built in the 1850s because too many boats were wrecking on the Fenwick Shoals, six miles offshore. At 87 feet tall, its light can be seen 15 miles out in the ocean. When first lit in 1859, it was powered by whale oil. It’s now a mini-museum run by a small group of volunteers headed up as of this writing by Winnie Lewis, the granddaughter of a former keeper. No climbing is allowed. Here is the Fenwick Island Lighthouse website. 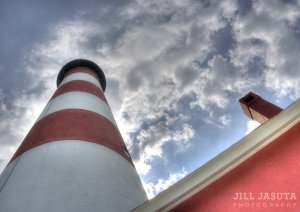 The first lighthouse built on the Virginia side of Assateague Island had a short life due to shoddy construction. It lasted only 30 or so years, from the mid 1830s to the mid 1860s. The current lighthouse there was built in 1867. At 142 feet tall and standing on a bluff rising up from the beach, its light can be seen from up to 19 miles away. It’s still functioning as a lighthouse, but it’s also open to the public on weekends during the warmer months. You can climb up to the top here as well. A $1.5 million renovation was completed in 2013, complete with a fresh coat of the alternating bands of red and white paint that help make this one look so pretty. Here is the Assateague Light website. 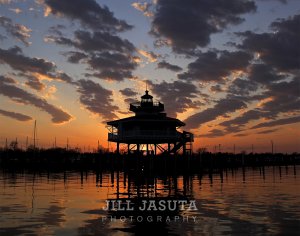 Back up in Maryland, Cambridge has the most recent addition to the Eastern Shore lighthouse itinerary. The replica Choptank River Lighthouse opened up there in 2012, thanks to a bunch of community-minded folks who did all the fundraising and grant writing to make it happen. It’s a six-sided screwpile model, based on the design of one that used to stand in the Choptank River near the mouth of the Tred Avon River. This one stands on postcard-pretty Long Wharf. It’s open daily during the warmer months for self-guided tours, and it’s got some neat exhibit material laid out on the inside (though I may be biased, given the fact that my wife wrote many of the exhibit panels). Here is the Choptank River Lighthouse website. 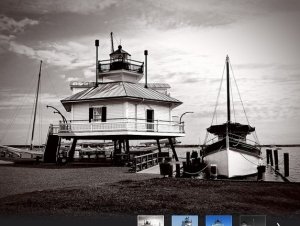 Hooper Strait is one lucky lighthouse. Another screwpile model, it was built in 1879, and manned by a keeper until 1954 when it was placed on automatic pilot. In the 1960s, the Coast Guard started tearing down the structures associated with now-automated lights—they were looking to reduce maintenance costs and discourage vandalism.

But then the folks who were planning to launch a new Chesapeake Bay Maritime Museum caught wind of the fact that Hooper Straight was in danger, and they had arranged to have the lighthouse cut in half at its eaves and then have both pieces barged 39 miles up to St. Michaels. Between 1965 and today, it has stood as the signature visual symbol of the museum. That was the first time such a rescue was accomplished—the move inspired rescue efforts for several more lighthouses, such as Seven Foot Knoll in Baltimore and Drum Point in Solomons. Here is the Chesapeake Bay Maritime Museum website.

There are more lighthouses than these–this daytrip includes only those beacons accessible from the land. Here are a few ways to get out on the water and see others:

• The Chesapeake Chapter of the U.S. Lighthouse Society takes occasional cruises out to remote lighthouse sites.

• Chesapeake Lights out of Tilghman Island offers cruises that include visits to several lighthouses.

Here are a couple of extra stops along the way that may be of interest to lighthouse fans:
• In Delaware, there is a museum at the Indian River Life Saving Station and lots of artifacts at the DiscoverSea Shipwreck Museum.

• In Ocean City, there is the Ocean City Life Saving Museum.

Three photos here are by Jill Jasuta Photography–the one up top, “Storm Clouds at the Lighthouse,” along with the shots in the text of Assateague Light and the Choptank River Lighthouse. These and several other lighthouse shots by Jill are available in print and greeting card formats here at the Shore Store.

The photo of Fannie Mae Salter polishing a lens at Turkey Point is from the U.S. Coast Guard. The one of the Lightship Overfalls is from the National Park Service. The one of the old Cape Henlopen Light is from Wikimedia Commons. And the one of the Hooper Strait Lighthouse comes from Flickr Creative Commons–it was uploaded by “MJ Boswell.”