For many years, historians gave the title of oldest black community in the country to a neighborhood in New Orleans called Tremé, which dates its African American story back to 1812. But thanks to an extraordinary research and revitalization project in Talbot County, Maryland, it’s now apparent that a neighborhood on the Eastern Shore has Tremé beat by more than two decades. 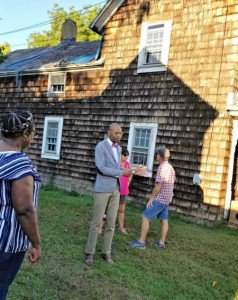 The Hill neighborhood in Easton lies in and along the southern and eastern edges of the town’s much-celebrated downtown district. During the annual Frederick Douglass Day festivities in Easton in September 2017, I joined with 25 or so other interested folks on a walking tour of The Hill led by Morgan State University archaeologist Dale Green (he is shown here in the midst of leading that tour).

Green is a key figure in The Hill Community Project, which he launched back in 2010 while studying the history of a black church in the neighborhood. Since then, some 70 experts in the fields of archaeology, genealogy, historiography, oral history, preservation, land records, and other specialties have contributed to the work of unraveling the stories that The Hill neighborhood in Easton has to tell.

This work is part of a broader trend in the field of African-American history. All across the country, scholars are digging into the stories of free blacks in the time of slavery. In the course of this work, other neighborhoods have turned up that may also be older than Treme, so it remains to be seen whether The Hill ranks as the oldest or among the oldest such communities in the country.

Either way, it’s an important and fascinating piece of history. The tour began in the shadow of the Frederick Douglass statue that stands in front of the Talbot County Courthouse. There, Green told us that the first free black to move into The Hill, James Freeman, did so in 1787. Then he introduced one of Freeman’s descendants—police officer Yvonne Freeman arrived for the tour in uniform and atop her community-policing bicycle.

Several factors contributed to a sudden jump in the population of free blacks around this time. The agricultural economy of the Eastern Shore was shifting from labor-intensive tobacco to wheat, leaving farmers with more slave labor than they needed and a slack market when it came to selling off extra slaves. Some of them began freeing slaves instead of carrying too many. 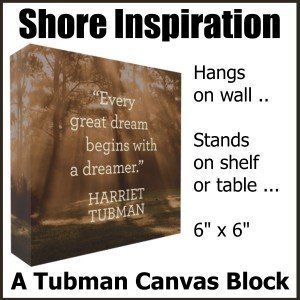 The rise of the free black population in Easton was likely related to the strength and size of the town’s Quaker community, too. Many Quakers were just coming around in this period to the belief that slavery violated their moral principles—they, too, began freeing slaves.

One last contributing factor: This was a window when a growing number of blacks put themselves in position to engage in so-called self-liberation, buying their own freedom and/or freedom for spouses, children, or parents. Free blacks did this with earnings from jobs and businesses, obviously, but slaves managed to do it as well. Some ran side businesses in whatever little free time they had. Others made arrangements with masters to hire themselves out as paid labor. The ability to keep a small piece of the proceeds for themselves was sometimes part of the deal.

Such was case with a woman Green dubbed the “founding mother” of The Hill neighborhood. In 1788, Grace Brooks somehow managed to purchase not just her own freedom, but that of her children and grandchildren as well. She then built herself a home on a half-acre lot at Talbot and Hanson streets. She must have been quite the commanding figure in town: At her death in 1810, the local newspaper gave her a laudatory full-page obituary, an honor that the paper only rarely accorded even white woman of the time, Green said.

The Hill is full of such fascinating stories and sites. On the 300 block of South Street is the onetime home of a buffalo soldier, William Gardner. A button from his old military jacket is among the 56,000 artifacts that have been uncovered in archaeological digs in The Hill.

The corner of South Lane and Hanson Street is another fascinating spot. Here, in 1818, more than 100 free blacks gathered to listen to open-air preaching by Rev. Shadrach Bassett. At that time, free blacks and slaves either worshipped in white churches or they didn’t attend formal services at all. Rev. Bassett was offering Easton a new alternative—he’d been sent by the founders of the then-fledgling African Methodist Episcopal Church.

Green suspects that this was first such mission launched in the region, making this corner the birthplace of African Methodism on the Eastern Shore. Soon, Easton had its own Bethel AME congregation. They met at first in an old blacksmith shop. Today, you can find that congregation worshipping in a building on Hanson Street that was dedicated in 1878 by none other than Frederick Douglass himself. (Douglass also dedicated the Asbury United Methodist Church building that’s quite nearby, on Higgins Street.)

In talking about The Hill Community Project, Green likes to use the famous Booker T. Washington quote about “lifting the veil of ignorance” by spreading the word about the stories that The Hill has to tell and incorporating them into a fuller and more powerful version of the history of Easton and its importance on the Eastern Shore over the centuries.

In closing out the walking tour, Green said that he hopes that a comprehensive website documenting the work of the project in The Hill neighborhood in Easton will be up and running by the latter part of 2018. I will be waiting eagerly for that, as I have a lot to learn yet about The Hill, and I look forward to digging into whatever array of materials—documents, photos, oral histories, and more—that he and his colleagues put up on the site.

NOTE #1: The official boundaries of The Hill have shifted some over the centuries. During our walking tour, the ground Professor Green covered was bounded by Dover, South, Harrison, and Higgins streets.

NOTE #2: There is a walking-tour brochure available at the Talbot County Visitors Center, 11 South Harrison Street, or by contacting Talbot County Tourism at 410-770-8000 or tourism@talbotcountymd.gov.

NOTE #3: This is part of series for Black History Month 2018. Last week’s entry in that series was about Henry Highland Garnet, who was born a slave in little Chesterville in Kent County, Maryland and made his was first to freedom and then to great prominence in the abolitionist movement. You can read that piece here.