The Ghost Ships of Kiptopeke

Step out onto the beach at Kiptopeke State Park for the first time and you’ll need to do a double take. Why, yes, that is a humongous arc of a jetty made out of eerie-looking ghost ships. It’s like some naval version of the scene at the end of the original “Planet of the Apes” where we see the tattered remnants of the Statue of Liberty rising up out of the sand. 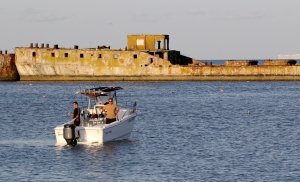 Kiptopeke is just outside of Cape Charles, down at the tip of the Eastern Shore of Virginia. On any sort of a decent day, the place will be crawling with fishermen working waters around the concrete ships from powerboats and kayaks. It turns out that several different species of fish—rockfish, tautog, and eel among them—love the ghost ships as much as we humans love haunted houses.

So where the heck did these monstrous ships come from? That story goes back to the early years of World War II, when the United States was ramping up production of naval vessels for the war effort. One consequence of that effort was a shortage of steel to build vessels that could transport commodities, which, of course, were essential to the war effort as well—soldiers need to be fed and clothed, after all. 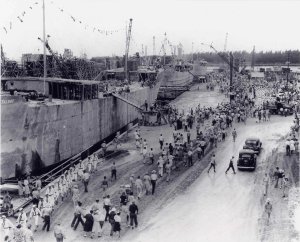 One company that stepped up in this moment was McCloskey & Co., based in Tampa Bay. They made a bunch of cargo ships with concrete hulls. Yes, concrete floats just as surely as steel does. Measuring 120 yards in length and weighing some 5,000 tons, those ships made lots of commodity runs to the islands in the Caribbean for produce, sugar, and other essentials.

Later, the ships got closer to the action. The Allies sank a couple of these ships off Normandy to try and create a breakwater that might protect the guys landing on D-Day. Out in the Pacific, concrete ships were used as giant floating storage containers, supplying the Pacific fleet directly from the water.

Once the war ended, the ships became obsolete overnight. The U.S. government parked them in various military bases around the country and basically put them in mothballs.

Somehow or another, this came to the attention of the Virginia Ferry Corporation, which then owned the land where Kiptopeke lies today. They were in the midst of building a new ferry terminal for a route linking Cape Charles with Hampton Roads.

Needing a new jetty to protect the terminal against the ravages of the weather, they asked after the concrete ships. The government said: “Sure, you can have them. Come and get ‘em.” It turned out there were some sitting around in Norfolk. The company had others towed up from Beaumont, TX. All were then half sunken in a broad arc out around the new terminal, with an opening right up the middle so that vessels could make their way in and out.

The story then gets even more colorful. One entrepreneurially minded ferry director started a private drinks-and-poker club aboard one of the half-sunken ships, all of which arrived from the war effort completely furnished and ready to accommodate 48 crew members. Not surprisingly, the ships became a popular attraction for mischievous teenagers as well.

There was talk once of putting historic markers up on one or more of the ships and arranging for some sort of officially allowed public access, but nothing ever came of it. But it’s still fun to admire the ghost ships nowadays, whether just eyeing them from the shore or by paddling or motoring out for a closer look.

Bonus Tip: When you go to see the concrete ships, be sure to leave some extra time and maybe bring bikes or kayaks. Kiptopeke is quite the beautiful park, boasting a beautiful stretch of beach and some nice hiking and cycling trails. The park is big with birders as well, sitting as it does smack dab along a big migratory flyway.
–Written by Jim Duffy

NOTES: The best resource I found on the story of the concrete ghost ships of Kiptopeke came from the writer Ben Swenson, and this little essay is mostly adapted from his material. You can review articles on the topic by Mr. Swenson here and here. The McCloskey shipyard photo here is from his page. The other photographs here are by Jill Jasuta Photography.