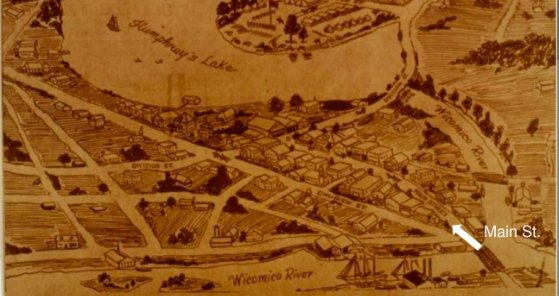 This excerpt from Eastern Shore Road Trips #1: 27 One-Day Adventures on Delmarva is comes in the midst of a road trip through Salisbury, starting on the east at the Ward Museum and then running through City Park and into downtown and its Riverwalk.

Do you see that giant kidney-shaped thing at the top of this old map of downtown Salisbury? That is the 40-acre Humphrey’s Lake that used to cover the middle of town, its banks running clear up to Church Street, all the way up near where Business Route 50 runs today. Its waters used to lap up against the rear of the County Courthouse. The spot where the library stands today was under water. So was all of East Main Street. So, for that matter, was most of City Park.

If not for the collapse of the dam that created this lake on May 28, 1909, Salisbury would look quite a bit different from the place we know today. That accident sucked all of the water out of that mile-long lake and sent it rushing into the Wicomico River. Here is  how the the Salisbury Advertiser newspaper described the event:

The bridge crossing Humphrey’s Dam broke about 2PM, Friday and swept away with it a considerable portion of the surrounding dam.  Lake Humphreys was completely emptied.

The lake was quite full and a regular torrent of water and mud swept into the river carrying some of the smaller boats with it.  The Idle Wilde, owned by Capt. Wildy was thrown into another boat on the other side of the river, slightly damaging it and then swept down the river.  A negro was in charge and the only person on board.

The bridges along the river stood the shock of the rushing water without heavy damage.  A large number of people gathered to see the rushing water and the police were occupied keeping the crowd back into what they considered the safety zone.

It was feared for a while that the heavy stone foundation surrounding the broken bridge would be undermined causing a cave in that would catch some of the people who persisted in going as near the break as possible.  A force of men were put to work at once on the Gas Mains which were broken. 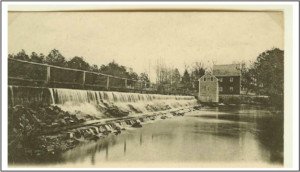 Up until that day, the lake had been a defining feature of the city for more than a century and a half. Created by a dam built in the 1740s, it was named for a man who owned land in the area in the 1800s. The dam and lake played a big role in Salisbury’s development as a center for timbering on the Eastern Shore. This business reached its height with the arrival of railroad lines in the years after the Civil War. In 1872, the city boasted 45 different water-powered mills. There were 25 steam-powered mills as well.

(Reader Bill Davis kindly helped out in the comments below identifying what’s going on in the old postcard of Humphrey’s Mill shown here. He says, “The postcard showing Humphrey’s Mill is the spillway on the North prong of the Wicomico River. A road of sorts used to cross east-west over the prong. The road is present day West Isabella Street. The buildings to the right were on the corner of Mill Street.”)

The Williams Lumberyard stood near today’s Camden Avenue Bridge around that time. Old reports say that the surface of the Wicomico River there was almost impossible to see for all the tree trunks chained together out on the water. One old quote I came across describes how “boys would cross the river on those [logs], much preferring this method to walking on the bridge, even if they did occasionally slip off into the water.”

Division Street ran atop the dam where the lake began, and it served back then as a main route for carriages coming in and out of town.

In her 1923 “Sketch of the Early History of Wicomoco County and Salisbury,” Marie Louise Ellegood recalls childhood days in which “our treasured Sunday after noon diversion was to stand on the narrow boardwalk over the waterway and see the Falls dash on the broken stone buttress below as the water merrily and ceaselessly journeyed on.”

In another memoir about life in Salisbury around that time, Nancy R. Fulton lamented the loss of Humphrey’s Lake: “A great change in our town resulted. There was no longer a beautiful lake on which to skate in winter and boat in summer, and the Baptists had no shallow water at the foot of Baptist Street for their immersion.” 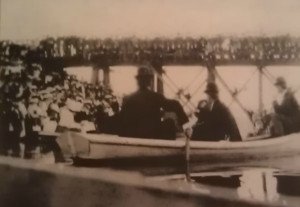 The only possible cause of the accident that I came across in my reading involved the pressure placed on the dam by steam rollers that construction crews were using to lay a new macadam surface on Division Street. Interestingly, the dam collapse doesn’t seem to have had that much of a long-term impact on the town’s logging businesses, as it happened at a point when it was high time everybody switched over to steam power anyway.

The main challenge facing Salisbury after Humphrey’s Lake dried up was what to do with 40 acres of mud flats. Early on there was a half-hearted effort to repair the dam, but that was quickly washed away by storm surge. It was the business community that moved on the land first, and that’s how East Main Street came into being.

Otherwise, there seems to have been a couple of decade’s worth of bickering between the city and county over what to do next. The idea for a big park finally came to the fore in the 1920s. On July 29, 1926, the Wicomico News reported: “Public sentiment in Salisbury is rapidly rounding into shape in favor of a municipal park.” 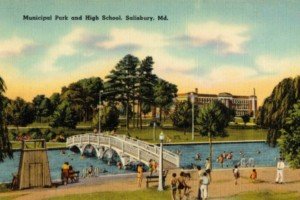 An old postcard showing City Park in its early days

Around the 100th anniversary of the dam break in 2009, George Chevallier of the Wicomico Historical Society gave a presentation devoted to Humphrey’s Lake. In a newspaper article promoting that talk, he ranked its disappearance alongside the Great Fire of 1886 as the two most important events in Salisbury’s history, with neither ranking ahead of the other.

In a bit of an aside, Chevallier wondered aloud in that article about something that comes into my mind whenever I come across the topic of old Humphrey’s Lake in my reading or go for a stroll along the River Walk downtown or through City Park.

“It is fun to try to imagine what Salisbury would look like if we still had Humphreys Lake,” Chevallier said. Take a look at the map up top here again, and I bet you’ll see what he means.