Talks & Presentations: Introducing Your Group to the Landscape & People of Delmarva

Home / Miscellany / Talks & Presentations: Introducing Your Group to the Landscape & People of Delmarva 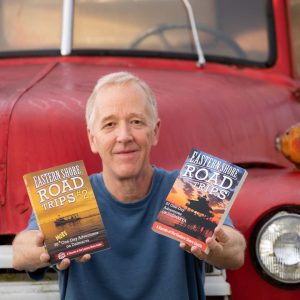 Below are several topics that have proven popular with audiences in recent years. Where his expertise allows, Duffy has also tailored presentations specifically to the interests of groups and the topics of business meetings. Contact him for information about scheduling and fees/stipends.

This storytelling journey ventures from one small town to another on the Delmarva Peninsula that stretches across the Eastern Shore of Maryland into Virginia and Southern Delaware. Learn, among other things, about the all-female Petticoat Regime that ruled the resort town of Ocean City in its early days, a world-record-setting chicken whose egg-laying exploits led to a big-city parade in her honor, and the wild and wooly (and drunken) days when a small Delmarva town ranked as “The Quickie Wedding Capital” of the eastern seaboard.

Journeys along the Underground Railroad 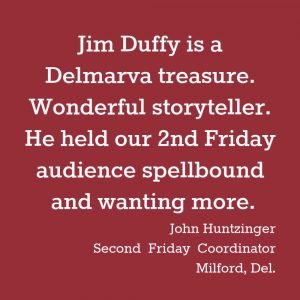 The Eastern Shore of Maryland was home to two American heroes of the first order in Underground Railroad conductor Harriet Tubman and antislavery activist Frederick Douglass. The collection of stories from slavery times focuses on the emotionally charged keystone moments at the heart of their incredible journeys from bondage to freedom and into the annals of history. Duffy will also discuss the life lessons he learned while researching and writing the book Tubman Travels: 32 Underground Railroad Journeys on Delmarva.

Against the Odds: Wonder Women of Delmarva

This storytelling presentation celebrates the ingenuity and bravery of women whose accomplishments helped shape history and culture on the Chesapeake and through the Delmarva region. Learn about the hot-tempered housewife who launched the poultry industry, a poverty-stricken single mom who built the most luxurious beach resort of her day, and a stargazer who used her home economics training to develop a night-sky classification system still used by astronomers today. Meet, too, women who excelled in male-dominated fields as lighthouse keeper, river ferry pilot, and scientific inventor. 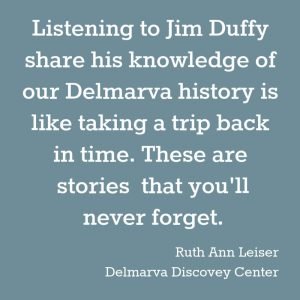 Hear the stories of pioneering men and women who helped give birth and shape to businesses that have come to define life in the Chesapeake region over the centuries: oystering, farming, crabbing, canning, and poultry growing among them. The content here includes a few wild-card tales as well—the family doctor who created a sunburn remedy that would become Noxzema skin cream, the globetrotting adventurer who found his way to a small Delmarva town and invented the wooden ice cream spoon; and the descendant of a Founding Father who set out to launch a trans-Pacific trading operation by starting up a fur farm filled with black cats on a remote island (that last one didn’t work out so well).

This introduction to a key historical region on the heart of Maryland’s Eastern Shore is a collection of funny and fascinating anecdotes that begins with the area’s first landowner—“a lecher, a blasphemer, and quite possibly a murderer”—and includes antislavery hero Frederick Douglass, the popular legend (or is it fact?) of the “Town that Fooled the British,” writer James Michener of “Chesapeake” fame, a famously cantankerous local waterman, and others.

Thank you for your interest here!