Jim Duffy Will Be Telling Fun “Tales from Delmarva” on Fri., Nov. 8 in Milford, Del.

Home / The Newsroom / Jim Duffy Will Be Telling Fun “Tales from Delmarva” on Fri., Nov. 8 in Milford, Del. 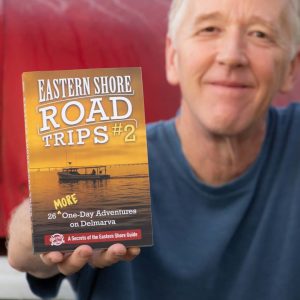 Author and storyteller Jim Duffy of Secrets of the Eastern Shore will share some of his favorite “Tales from Delmarva” in a talk and discussion for the monthly 2nd Friday event at the First Presbyterian Church in Milford, Del. at 7pm on Nov. 8. Duffy is the author of two collections of Eastern Shore Road Trips, as well as Tubman Travels: 32 Underground Railroad Journeys on Delmarva. More info about his books can be found here.

The 2nd Friday series is a free community gathering dedicated to showcasing a diverse array of talented local presenters, including musicians and experts on various topics of interest. Duffy’s presentation will wander from town to town on the Peninsula, zeroing in on the stories of some of the most fascinating characters he has come across while researching his books and managing the popular Secrets of the Eastern Shore Facebook page for its 50,000+ followers.

Secrets of the Eastern Shore is a homegrown business based in Cambridge, Md. that celebrates the Delmarva Peninsula in stories, photographs, and products. Its mission is to inspire people to explore the Peninsula and appreciate the incredible things that have happened in its towns, on its farms, and along its waterways over the centuries. 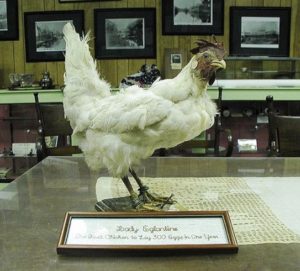 Duffy will tell the tale of this record-setting chicken, the subject of hundreds of newspaper stories around the country a century ago.

Duffy has given presentations along these lines on various topics in dozens of towns up and down the Peninsula in recent years. The “Tales from Delmarva” talk is something of a greatest-hits collection of his most popular storytelling topics. His speaking style is casual and humorous. Audience participation and discussion are very much encouraged.

The event is free. The church is located at 101 South Walnut Street, near the heart of a historic downtown that’s full of interesting shops, restaurants, and cultural institutions, as well as the popular Riverwalk that winds along and over the Mispillion River as it runs through the heart of Milford.

The setting of the “Tales from Delmarva” talk in Milford is historic as well–the current First Presbyterian church building dates to 1850, but the congregation goes back more than two centuries. Its roots are tied to the ministry of famed Francis Makemie (1658-1708), an Irish immigrant who settled on the Delmarva Peninsula and became one of the founding fathers of the Presbyterian faith in America as well as a key champion for religious freedom on these shores.

Here is the Facebook event the church has created for the presentation.

You can also send any questions to Duffy at SecretsoftheEasternShore@gmail.com.