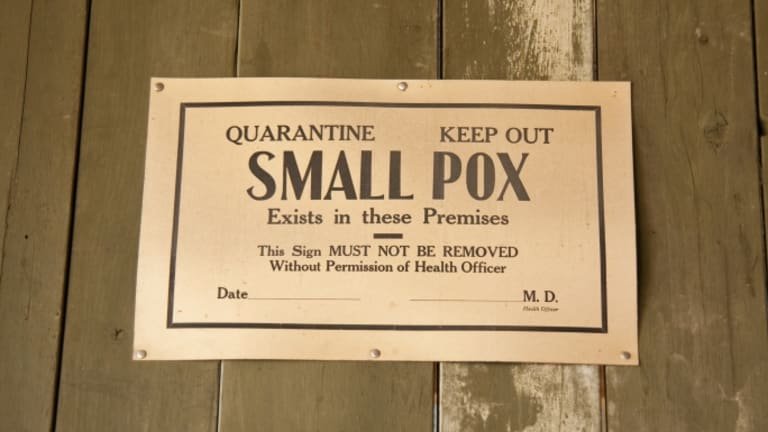 By Secrets of the Eastern ShoreMay 5, 2020No Comments

Home / Way Back Machine / SUSSEX COUNTY SPAT: When Seaford Set Up Blockades to Keep Out People From Laurel, 1916

In the spring of 1916, a small smallpox outbreak popped up in Laurel, Del. In the days that followed, health officials in the neighboring town of Seaford came to believe that their colleagues in Laurel weren’t doing everything they could to keep the disease at bay. They ordered a halt to all traffic between the two towns.

The Wilmington News Journal, May 15: “Guards have been stationed at the … railroad station and on the roads leading from Laurel to Seaford. Seaford people have also been warned that if they visit Laurel … they are liable to find it rather difficult to come home again.”

Same issue: “Friday night several automobiles with Laurel Negroes came to Seaford and met the Seaford colored folks.” A health inspector broke that gathering up, but “immediately the bulk of the crowd went to a local moving picture show in town.”

Lots of logistical issues arose in the coming days. One example: Bakeries from Salisbury usually delivered fresh bread to businesses in Laurel first, then continued up to Seaford. Now they had to circle around, approaching Seaford via a roundabout way that took them across the river at Sharptown, Md.

The Wilmington News Journal, May 16: “Quite a laugh was created in Seaford yesterday morning at the expense of the local Board of Health, when it was learned that certain your men from Laurel had slipped by the quarantine guards and had spent the evening calling on lady friends in Seaford. Last night the joke told a decidedly serious turn when every member of each house where the Laurel young men had called were given 24 hours in which to become vaccinated, under penalty of being quarantine.”

Seaford upped its guard–adding a second armed checkpoint on the road from Laurel.

Wilmington News Journal, May 17: “Alice Neal, the four-year-old daughter of William Neal, was among the number vaccinated [recently in Seaford]. Although others vaccinated at the same time have had no trouble at all, little Alice shortly afterward was taken very ill, due, it is said, to the vaccination, and is now lying at the point of death.” She would die five weeks later.

‘A Benighted Set of Ignoramuses’

After reports appeared in Wilmington newspapers about a large funeral gathering for a smallpox victim there, the Laurel Board of Health issued a statement that sought to clear the air. The board’s first contention was that no such gathering ever occurred. 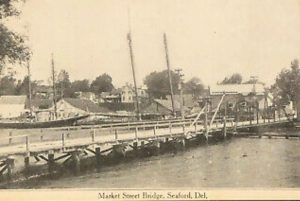 The bridge across Market Street that led into Seaford at the time of these events.

From the statement: “No body of men possessing a spark of intelligence would permit such a thing, although it is an admitted fact that some Wilmingtonians have for years labored under the impression that the people of ‘Old Sussex’ were a benighted set of ignoramuses. We gave you credit of having more sense.”

Later in the statement: “The public Negro funeral’ [that your newspaper reported] originated in the brain of your Seaford correspondent.”

Bottom line in the statement: “There have been but 11 very mild cases here, seven of whom are out and the other four will be in a day or two.”

‘Bitterness in the Minds of Some Citizens’ 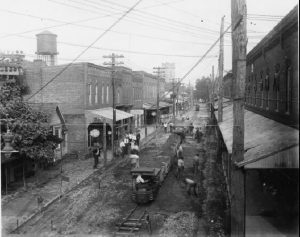 Market Street in Laurel getting paved in about 1917.

Wilmington News Journal, May 19: “The Laurel-Seaford imbroglio has now reached the opera bouffe state. The scene covers that section of territory lying between them and the principals in the play are the Boards of Health of the two towns, with armed guards, policemen, etc. to help add to the general mixup.”

The same issue: “Shortly after 9 o’clock an automobile from Laurel endeavored to slip by the guards. … The occupants of the car … were known to the guards [and] upon their pledge to go directly through town, were permitted to pass. No sooner had they passed over the county bridge than they began distributing circulars signed by the members of the Laurel Town Council and Board of Health, in which statements were made in direct contradiction to those issued by the Seaford Board of Health.”

The mayor and chief of police soon appeared and soon issued an order for the arrest of the Laurel interlopers. From the newspaper: “But by this time [the occupants of the car] had decided that Laurel was the best place for them.” 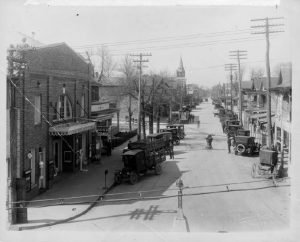 Downtown Seaford. The date of this photo is uncertain.

The same issue: “William O. Johnson, a prominent Republican politician of Blades, was charged with bringing an automobile into Seaford in defiance of the rules and regulations of the health department.” Johnson did not deny the charge. He confessed to a Magistrate Thorne “that the automobile had been in Laurel, but that it was the first time he had ever heard an automobile could have smallpox.”

This went on for another week before the quarantine was ended. The Seaford Board of Health issued a statement on May 31, assuring everyone that they “acted merely what they thought were the best interests of the town and without any spirit of malice or spite.” Still, they conceded: “The affair has not come and gone without leaving some bitterness in the minds of some of the citizens of Laurel [who] will probably continue in their efforts to hamper … friendly relations between the two towns.”

–posted by Jim Duffy on May 5, 2020 for Secrets of the Eastern Shore/Whimbrel Creations LLC. Both of the photos in the body of this story are in the collection of the Delaware State Archives. Thank you for reading!