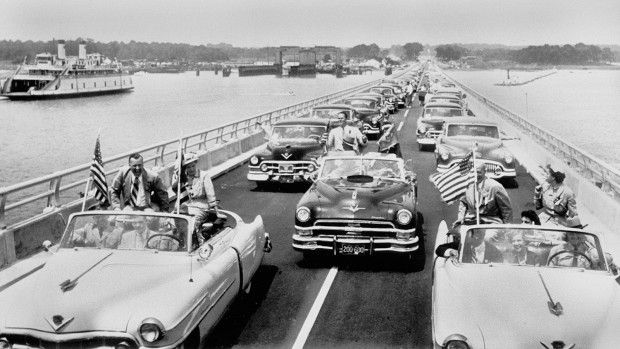 What Might Have Been: Chesapeake Bay Bridge Plans That Never Panned Out

Home / Way Back Machine / What Might Have Been: Chesapeake Bay Bridge Plans That Never Panned Out

This is an excerpt from my book, Eastern Shore Road Trips 2: 26 MORE One-Day Adventures on Delmarva. It’s a sort of historical endnote to a chapter where I get off the highway and wander around Kent Island, Md, learning about the stories the place has to tell and the sites (and sights) it has to see.

History is a funny thing. Once a big event is in the books, everything about the way it unfolded starts to look inevitable, like it was bound to happen in just the way it did. So it is with the Chesapeake Bay Bridge, which opened on July 30, 1952.

But sometimes it’s fun to play a little what-if. For instance: What if one or another of the various other Bridge plans put forward over the years had been realized instead? What would the Shore look like today?

The earliest plan for a Bay crossing dates to 1907. At the time, business leaders in Baltimore were nervous, as railroad lines had begun making it easier and cheaper for Eastern Shore goods to get to Wilmington and Philadelphia.

Worried that Baltimore would lose out, the business community there got behind a proposal by State Senator Peter C. Campbell to build an electric trolley line between Baltimore and Chestertown. They soon hired the engineering firm Westinghouse, Church, Kerr & Co, Inc., which delivered a plan that not only had the trolley crossing the Bay but also envisioned a 235-mile network of new trolley tracks connecting all of the major towns on the Shore.

The price tag on the Trolley Plan came in at $13 million, and that number seems to have scared everyone off.

At the end of World War I Gov. Emerson C. Harrington got behind a plan to build a double-deck bridge linking Bay Shore and Tolchester, on the Upper Shore in Kent County. One deck would be for freight trains, and the second deck would be for passenger trolleys. The plan lost out to a new and expanded ferry service, including between Annapolis and Claiborne. Later, a Kent Island ferry landing would be moved to Matapeake, and the Annapolis landing would be moved to Sandy Point.

This is the one that came closest to actually happening. Both the Maryland legislature and the U.S. Congress signed off on the plan to build a bridge from the Baltimore suburb of Edgemere, near Hart-Miller Island, to Tolchester Beach. The politicians even went so far as to appropriate $500,000 to get the show on the road—then the stock market crashed.

Various bridge plans came and went during the 1930s. The reports I’ve read all say that these plans fell by the wayside because no federal funding ever materialized. The year 1937 seems to have been the first time that a crossing from Sandy Point to Kent Island entered the mix. That plan was still on the table when World War II broke out and scuttled all bridge discussions for a while.

1949: The Chesapeake Bay Bridge We Know

Gubernatorial candidate William Preston Lane campaigned on a promise to get the Chesapeake Bay Bridge built at last, and the project was dubbed “Lane’s Folly” by his opponents. Here are a couple of choice quotes from people who thought the bridge was a really dumb idea.

• State legislator Henry Balch from Talbot County: “The proposal to build the Bay Bridge is extravagance to the nth power. The spending necessary would exceed the aggregate spending of every drunken sailor since John Paul Jones.”

• Baltimore Sun columnist (and so-called “Sage of Baltimore”) H.L. Mencken: “There is not the slightest reason to believe that any such structure could ever earn enough to pay the interest and amortization. … There is simply not traffic enough between the Eastern and Western Shores, and there is no evidence that there will ever be enough hereafter.”

But once he became governor, Lane proved the doubters wrong. The first shovel went into the ground in November 1949. Three years later, ex-Governor Lane was a guest of honor in the first motorcade across the Chesapeake Bay Bridge that we know today. Between all the sightseeing and backslapping along the way, that motorcade took more than two hours to make the crossing, so that first ride across the span qualifies as the very first Chesapeake Bay Bridge traffic jam, too.

–written by Jim Duffy and excerpted from Eastern Shore Road Trips #2: 26 MORE One-Day Adventures on Delmarva. Copyright Secrets of the Eastern Shore/Whimbrel Creations, LLC. Find out where to buy that book in area stores and online here.

NOTE: Most of the material here comes from research I did for a 2002 article in the now-defunct Chesapeake Life Magazine. Alas, it’s not online anywhere–I went back to the hard copy here.

LAST BUT NOT LEAST: Below here is an incredible photo of an iconic moment–the opening-day motorcade coming east across the Chesapeake Bay Bridge while a soon-to-be-shut-down steamboat crosses to the west in the bridge’s shadow. 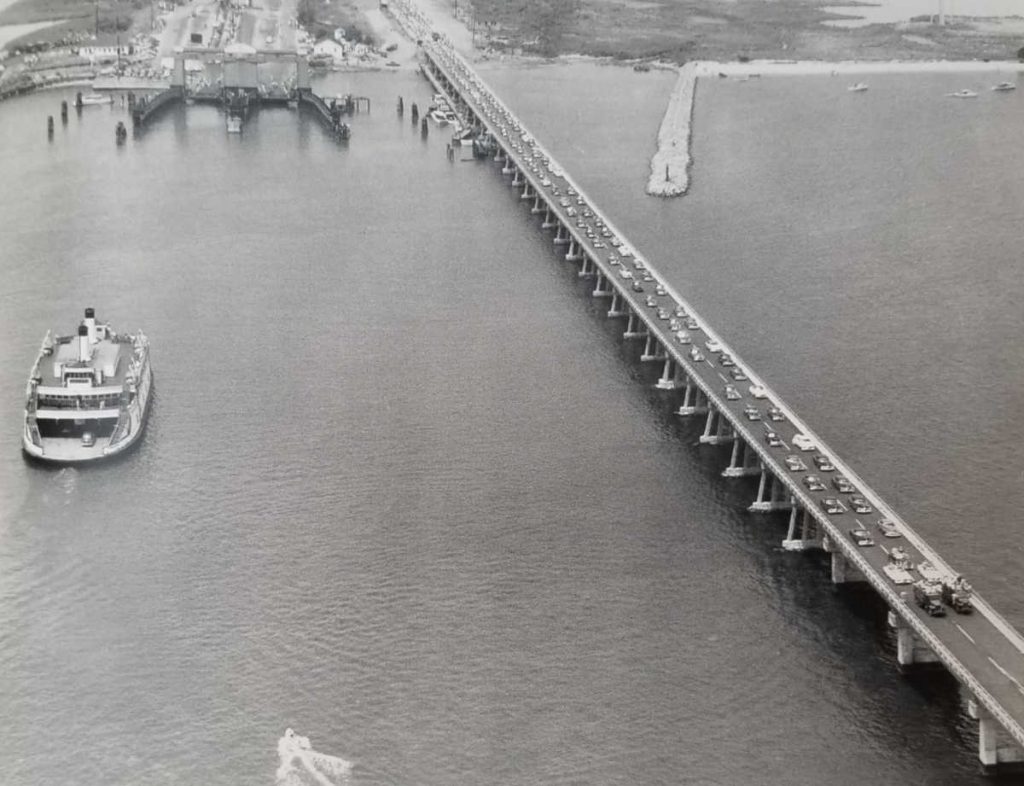