By Secrets of the Eastern ShoreAugust 28, 2020No Comments

If you visit the town of Choptank today, you’ll encounter a quiet little town of 120 or so souls set on a glorious bit of waterfront scenery in Caroline County, Md. Located a few miles below Preston, Choptank stands a little way above where the Choptank River takes a big bend to the west at the mouth of Hunting Creek. It’s a pleasant place for strolling, with a sweet marina and a gaggle of late Victorian homes.

The Choptank Indians had a settlement here in the 1600s, but they were gone before that century was out. There was nothing much to speak of on this land for a long time after that, as the place was part of a larger tract of rural open space deep into the 1800s. At various times in that stretch, folks referred to it as Paradise, Belmont, Huntington, and Gore.

The first hints of a town carried the names of Leonard’s Wharf and, later, Medford’s Wharf. The name Choptank stuck after a post office with that name opened its doors in 1883.

By that point, the place wasn’t quiet and serene at all. No one knows for sure when the first steamboat came calling on Choptank–one guesstimate places it in the 1830s–but that transportation revolution arrived in full force as the 1880s went on.

“The belching smoke and slap of the paddlewheel shouted motion and progress, … [It was a time] of men going places [and] building things.”

Hard to believe while visiting today, but Choptank once had four wharves capable of handling big steamboats. Two stood near the foot of today’s Choptank Road. These were traditional community affairs, where local businessmen came to load produce, livestock, and seafood for shipment for far-off markets. Here, too, passengers boarded the vessels. The other two wharves, located near today’s Choptank Main Street, were private affairs–one for Wright’s Cannery and another for a shirt factory. 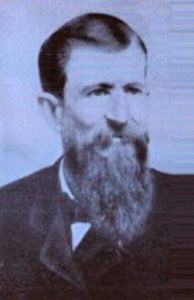 Born in 1839 just up the river at Gilpin’s Point, Wheeler worked as a cook on a schooner as a young man, then opened a store on his home turf. In 1870, he moved that store to Hillsboro and soon expanded into the steamboat business. At first, Wheeler rented vessels, but as his business grew he had several steamboats built. The most famous of those was the Minnie Wheeler, built in 1881. The business lasted until the early 1900s.

I came across one fascinating snippet about a Wheeler line employee while paging through a booklet titled “Memories of Choptank” that I stumbled upon in the Maryland Room of the Talbot County Free Library in Easton, Md. The snippet gives a snapshot summary of the life arc of William Henry Harrison Perry, who served as captain of the Minnie Wheeler for many years as the boat traveled between Baltimore and the Choptank and Tuckahoe rivers.

“Named for the president of the United States in the year of his birth, 1841, Captain Perry was a local farm boy who yearned for adventure. As he told the story to William Voshell in later years, he decided to go to sea when he was 15 years old.

One day, while he was helping his father plant corn on a farm in Poplar Neck, he plotted with Wes Seeny, who was a cook on a schooner loading cordwood up Marsh Creek. About dinner time when the tide rose, Perry boarded the schooner instead of eating dinner and never returned to the farm. 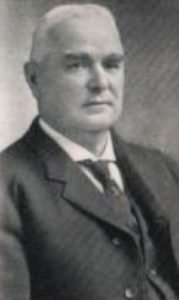 He sailed the seven seas, had many adventures, and in 1881 joined the Wheeler Line, coming back to the Choptank River as captain of the Minnie Wheeler. He married Celia Frances Wright … and built a lovely home, ‘Herdlands,’ on a farm on the west side of Marsh Creek. Wes Seeney, who helped him run away, served as cook on the Minnie Wheeler.”

Steamboats on the Choptank River went into a slow, steady decline as the 20th century progressed. But as late as 1921, steamboats were still showing up in little Choptank, Md. several times a week–at 9am on Mondays, Tuesday, Thursdays, and Saturdays. Perhaps, as you stand in the pretty marina looking out over the river, you will be able to hear a faint echo of the whistles that once signaled the arrival of boats like the one shown just below here, the Minnie Wheeler.

–posted and written by Jim Duffy on Aug. 28, 2020 for Secrets of the Eastern Shore/Whimbrel Creations LLC. All rights reserved. 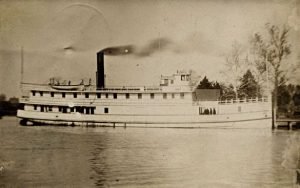 NOTE #1: If you ever decide to make a run over to Choptank, you will learn while wandering the marina that it is a stop on the Harriet Tubman Underground Railroad Byway. Tubman’s parents had a cabin near here, on Poplar Neck, and Tubman herself lived in this area while still enslaved. Key moments from two of her later escape operations unfolded on Poplar Neck as well. I tell the full story of those rescues in my book, Tubman Travels: 32 Underground Railroad Journeys on Delmarva.

NOTE #2: You will not find anything in the way of shops or restaurants in Choptank itself, but such businesses are just a few miles up the road in Preston. While you’re there, you should consider stopping to see historic Linchester Mill and visiting the Preston Historical Society Museum. There are some little-traveled backroads up this way, so bicycles are another option to consider.