Somerset Journey: The Steak Knife Was Invented in Crisfield, and That Story Begins on Marumsco Creek

Home / Characters / Somerset Journey: The Steak Knife Was Invented in Crisfield, and That Story Begins on Marumsco Creek

The story behind the creation of the steak knife in your kitchen drawer involves a bit of manufacturing ingenuity, but there is more to it. Think romantic sleigh rides, a devastating fire, steadfast religious faith, and then—a Christmas gift from a friend that changes everything.

This Somerset County, Md. tale begins with a farm boy who hated farm work. He much preferred puttering around in the blacksmith shop all day to toiling in the fields. The time is the 1890s. The place is along remote Marumsco Creek, below Marion Station in Somerset County, Md.

A thoughtful neighbor hired that boy to repair a pair of oyster tongs. Later in life, Charles Briddell would sometimes tell reporters that this turning point came at age 11. Other times, he would put it at age 13. His first payday totaled just to $1.50, but it inspired him to launch his first business at an age when kids today are still in middle school.

Soon, neighbors were bringing so many wagons, tools, and machines to the Briddell farm for repairs that, even while still in his teens, Charles had to build a two-story, 20-foot-by-40-foot workshop. Soon after that, he needed to hire employees. And soon after that, he reoriented the business toward making new products rather than repairing old ones.

A Romantic Interlude in Quindocqua

At some point in here, Charles Briddell fell for a pretty girl who sang in the choir at Quindocqua United Methodist. Every Sunday, he would travel seven or eight miles north from Marumsco Creek, hoping to catch her attention. Unfortunately, a lot of other boys were chasing after Ruth Maddox, too.

“Charlie seemed bashful and would go home disappointed,” Ruth would recall in her later years.

Young Briddell was not one to give up in the face of such adversity. Retreating into his beloved workshop, he emerged one winter Sunday with a made-by-his-own-hand sleigh that would glide smoothly along snow-covered roads. Ruth remembered the sleigh as “bright and shiny.” She also remembered the look on Charles’s face after she climbed aboard.

“Oh, he was so proud … as we rode along the snow-covered countryside with the sleigh bells jingling on the horse’s neck and the warm lap robe over our knees.”

When the weather got warmer, Charles showed up in a hand-built buggy equipped with newfangled rubber tires. The buggy’s other defining characteristic was its shape—it was unusually thin across the front. The sight of Charles and Ruth squeezed onto its seat inspired Charles’s friends to give the buggy a nickname.

Trial by Fire in Marion Station 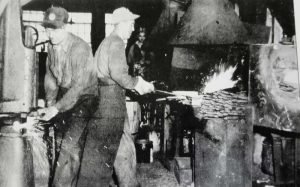 Charles and Ruth were married in 1905. His business was going great guns by this point. He had moved operations up into Marion Station, where his focus was on building various carts and buggies for customers all over Somerset County—and, increasingly, points beyond. He brought in a sales agent to drum up customers on the Eastern Shore of Virginia.

Disaster struck on two fronts. First, that Virginia sales agent misspent funds in ways that left Briddell saddled with unexpected debts that in turn created a shortage of the working capital he needed to buy supplies. Then, on a day when he and Ruth were attending a county fair in Pocomoke City, fire tore through the workshop. Briddell didn’t have enough insurance.

“Our money was gone, the shop was gone, and we even lost our new home,” Ruth recalled.

The couple’s first child, Evelyn, arrived about this time. The family headed back down to Marumsco Creek, moving in with Charlie’s parents. A second child died in infancy. Through these ordeals Charles redoubled his dedication to the Baptist faith, telling Ruth that it was time for them to “think more about the Lord and his works.” He vowed to tithe to his church for the rest of his days.

Rising from the Ashes

Later in life, Briddell credited Ruth with giving him the encouragement he needed to start over again. Back in the workshop on his father’s farm, he started small, making oyster knives for shuckers in seafood houses. He branched out in oyster tongs. 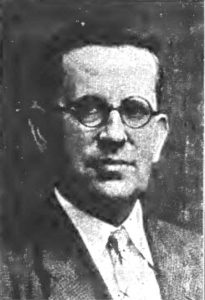 Business boomed again. The unreliable roads down around Marumsco Creek became a problem, washing out so often that Briddell often had a hard time living up to delivery promises in a timely fashion. In 1914, he moved the operation into Crisfield. At first, he subleased space inside another business. By 1920, the operation had moved into a manufacturing plant on Main Street. The Chas. D. Briddell Company had 40 employees making tongs, knives, and muskrat traps for customers up and down the Eastern seaboard.

The owner of an ice plant in Crisfield told Briddell he should look into making ice tongs, too. That became the company’s best-selling product through the 1920s. By the late 1930s, Briddell Company was a national operation, serving customers from coast to coast. One of its customers was the Coca Cola Company.

Charles Briddell was returning home from a business trip in September 1938 when he collapsed and died suddenly. He left Ruth behind, and six children, too. An estimated 1,000 people turned out for his funeral. The pallbearers that day were the students in his Sunday School class at the First Baptist Church of Crisfield.

The Christmas Gift From a Craftsman

Briddell’s adult children took over. During World War II, the company went all in to support the troops, manufacturing 2 million bazooka shells for the military and making the machetes that soldiers used to slice through jungle terrains.

After the war, a man named Paul Culver enters the story. In his late 20s at this point, he was living with his mother in an old farmhouse along Quantico Road outside of Salisbury. He has a job with a machine parts company, but much like the late Charles Briddell Sr. back in the 1890s, Culver’s real joy in life comes while puttering around in the workshop housed in a barn behind the farmhouse.

There, he spends endless hours in the company of an Irish setter named Tim. Culver’s specialty is making faux antique furnishings which he then gives away to friends. He also makes specialty knives in a corner of the barn that serves as a machine shop. He makes his own tobacco pipes. He makes his bow-hunting weapons. From a 1953 article in the Salisbury Daily Times:

“Hanging neatly in a rack over his work bench are 23 chisels for his wood carving. There are 25 or 30 wooden clamps on another wall, besides files in all sizes and 13 machines, such as metal and wood lathes, circular and hand saws, tool grinders, drill presses and many other devices used in his work.”

In addition to that full-time job, he does side work for the Briddell Company in Crisfield. He counts Charles Briddell, Jr. among his friends. In 1946, Culver sent Briddell a Christmas gift—a set of intricately carved knives that he intended as letter openers. Charles Briddell, Jr. took Culver at his word about that letter-opener business, but when Charles Jr.’s brother Tom examined the “delicate beauty and perfectly balanced design” of the gift, he thought … steak knives for everyone!

How could it be that steak knives didn’t exist until the middle of the 20th century? The story behind that goes back to the 1600s. For many centuries before that, people ate meals using a single utensil—a super sharp knife capable of cutting just about anything. Other than that, they used their hands.

Enter Cardinal Richelieu, a Frenchman who was quite the bigwig in the Catholic Church. You might remember a fictionalized version of the cardinal as the villain in The Three Musketeers. According to legend, the real-world Richelieu was a fastidious duck who despised the sight of men using their super sharp table knives to pick their teeth clean. He is also one of the most powerful men in the Western world, so people listen to his pet peeves—hence, the introduction of rounded knives with thick, dull edges that men couldn’t fit between their teeth.

Twenty-seven years after Richelieu died, King Louis XIV declared pointed knives illegal in all of France. The dull table knife soon conquered the dining world in other countries, too. Its inadequacies as a cutting tool led to the arrival of the fork.

‘Every Home Needs This’ Knife

The Briddell Company ordered half a dozen “letter openers” from Paul Culver. Tom Briddell then traveled 10,000 miles around the country, showing the knives to potential customers and gauging their interest in his vision of an America where there were steak knives in every kitchen. 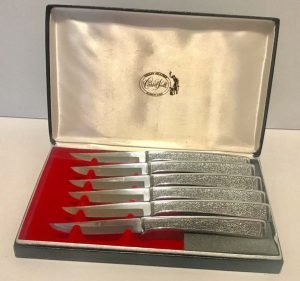 For five long years, the company worked to build up a customer base of shops, perfect the product, and prepare a manufacturing line. The Carvel Hall knife, named after a luxury hotel in Annapolis, went on sale in 1951. The Briddell company did $1 million of steak-knife business in the very first month. Here is the text of an early newspaper ad:

“The new Carvel Hall, worthy companion to the best table silver, is a knife of sheer utility. Slimly graceful though it is, its long, tapering blade of the finest steel cuts through the thickest steak with ease. Every home needs this smart steak knife set.”

The knives were a phenomenal success–so much so that the Briddell Company soon changed its name to Carvel Hall, as two words we now instantly recognizable around the country as a quality brand. After a fire damaged its downtown Crisfield facility in 1953, the company moved into a sprawling new 60,000-square-foot manufacturing plant on 28 acres of land outside of town. A showcase for “the latest ideas in industrial design,” the building had newfangled exhaust fans and an elaborate sprinkler system. There was an in-house cafeteria, an outdoor picnic grove, and a pretty manmade lake created by design in the place where workers had dug out fill during construction work.

In the boardroom where directors of the company met, a bronze plaque hung in a prominent spot. It offered words of advice from Charles Briddell Sr., whose journey up from Marumsco Creek marked the starting point in the company’s journey to steak-knife superstardom:

“My advice is to be honest and upright in business, serving the Lord and taking Him in all your plans and it is my belief that your efforts will be crowned with success.”

The steak-knife boom times were still going strong in the early 1960s when the Briddell family cashed in on Carvel Hall, selling the business to Towle Manufacturing. Slowly but surely in the decades that followed, the American steak-knife market would be taken over by cheaper rival products made overseas. Carvel Hall was struggling by the time Towle sold out in 1990. A decade later, the factory shut down.

–written and posted by Jim Duffy on March 31, 2020 for Whimbrel Creations LLC/Secrets of the Eastern Shore. All rights reserved.

• The Carvel Hall plant has been empty since the company shut down in 1990 (with one short-lived exception that failed very quickly). As of this writing in 2020, a group called BrightSpot Energy LLC has an option to buy the property from the City of Crisfield. The company has been working for a couple of years now on cleaning up the site and lining up tenant commitments. BrightSpot executives have expressed hope of finalizing a purchase deal in 2020 and then reopening the plant to house some sort of manufacturing facility.