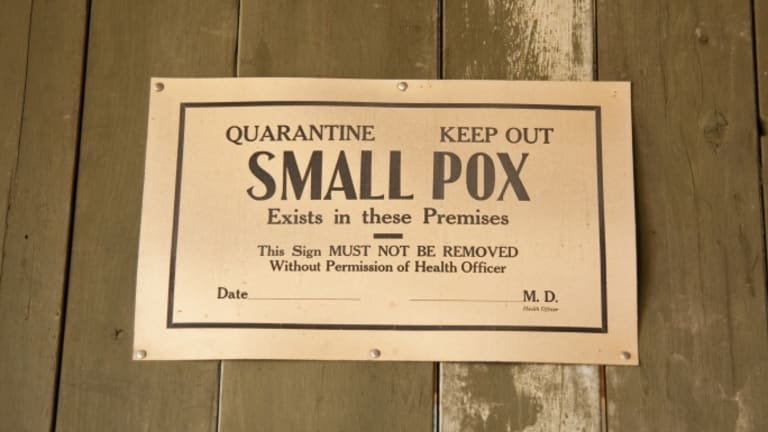 By Secrets of the Eastern ShoreDecember 10, 2019No Comments

The people of Sussex County did not have a very merry Christmas in 1919. Their holidays that year were filled instead with fear, distrust, and contention, culminating in a near riot in mid-January at the historic town circle of Georgetown, the county seat.

The story begins in early December when reports surfaced that a contagious infection had popped up near Millsboro. At first, everyone thought it was probably chickenpox. At worst, perhaps it was the “Cuban itch,” a milder cousin of the smallpox virus that scientists call alastrim.

No such luck: State health officials soon confirmed 20 cases of smallpox. There were no fatalities in the early days of the outbreak, but public health experts knew better than to underestimate a disease that ranks as the deadliest in human history.

The outbreak was located in a geographic area known by its odd-sounding name from colonial times, the “Indian River Hundred.” One newspaper account put ground zero amid the “colonies of Moors” living in the countryside outside Millsboro. That was, of course, a catch-all term for African Americans, Native Americans, and Mexican Americans.

Once smallpox was confirmed, the public-health hammer started coming down just as local families were gearing up to try and get ready for Christmas.

• Households with confirmed cases of smallpox were quarantined for weeks on end, with no one allowed in or out.

• The town of Millsboro stationed police officers along roads to try and keep people from smallpox-infested areas away.

• The state banned all shipments of holiday wreaths and greens, which really hurt—those greens were a big seasonal side business at that time for families in Sussex County.

• There was also talk of more drastic measures on the horizon, such as keeping all trains from stopping at certain stations or issuing quarantine orders that extended beyond disease-ridden households to encompass whole neighborhoods, or even entire towns.

Newspaper reports on Dec. 8 had the situation improving. No new cases had been diagnosed beyond the 20 already known. The authorities even started allowing a few shipments of holiday wreaths out of the area, though not before the greens were thoroughly fumigated.

Alas, the good-news respite was short-lived. By Dec. 11, the alarm bells were ringing more loudly than ever: “Every person in the [Indian River] Hundred is going to be vaccinated or be arrested,” said state health commissioner Chester H. Wells. In Millsboro, everyone was required to carry a certificate of vaccination while in public places.

An Opposition Mob Rises in Georgetown

The timing of the next big development here is not exactly clear in the newspaper accounts I’ve reviewed, but somewhere in the weeks that followed health inspectors came to the conclusion that there was a lot more smallpox around than first thought—a couple of hundred cases, in fact. In response, they decided to create a “belt of safety” around the disease.

On Dec. 19, the state ordered vaccinations for every single person in the five “hundreds” surrounding Indian River—those hundreds were Lewes and Rehoboth, Broadkill, Georgetown, Dagsboro, and Baltimore. The “belt of safety” was a big one, then, stretching from down in Selbyville to up in Milton and over to Georgetown. Folks within the belt were given until Dec. 27 to get to their doctors and get vaccinated—or risk getting arrested. Merry Christmas, one and all!

Newspaper guesstimates at the time put compliance with the order at about 75 percent of the population. The situation blew up on Jan. 14, 1920. Health Commissioner Wells came down to Georgetown from Dover that day to supervise the ongoing enforcement of the vaccination order, but he found that things were going much more slowly than he wanted. He visited 40 shopkeepers along Main Street and found at least 10 who could not produce vaccination papers. 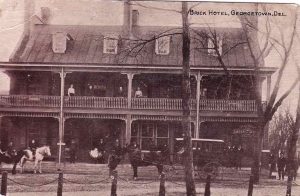 In an ominous development, Wells was unable to find a single police officer or any other town official who would help him serve arrest warrants on the slackers. That evening, at 7pm, the health commissioner was reading a newspaper in the Brick Hotel on the Circle when hundreds of angry residents descended on the downtown. Soon, the hotel lobby was packed with angry Sussex men and women. Scores of others remained outside, screaming things like “run him out” and “get a rope” and “we won’t be vaccinated.”

Inside, a man wearing a military uniform confronted Wells: “Will you go peaceably? For if you don’t we’ll put you out of town by force.” Wells gathered up his coat and papers, convinced that “if I resisted there would have been a riot.” Several men escorted him to a car and drove him to Milford. That vehicle, Wells said, was so well “covered with mud” that “I could not even learn the license number.”

Lots of conflicting reports arose later about what happened that night. Was it really 300 people? Did the mob really include many “of the town’s leading citizens”? Did Commissioner Wells, as the mayor of Georgetown contended, get “cold feet” and show a lack of “nerve?”

Another question: Were the men who escorted Wells to a car really on the wrong side of the law? One newspaper summed up the other side of the story in rather comical fashion: “It was not a mob. It was just a friendly little party of Dr. Wells’ friends who called to pay their respects” and give him a head’s up that a few “evil-minded folks” might “do him bodily injury.”

There was some public fallout in the aftermath. The top aide to the state’s attorney general resigned amid insinuations that, as a Georgetown native, he had been overly sympathetic to the recalcitrant locals. Similarly, the entire local health board in Georgetown resigned en masse in late January, with the same suspicions circling around their departures.

A new local health board was installed on Jan. 29. While I saw nothing in my reading that came right out and said explicitly that state and local officials had reached a backroom compromise to end the dispute, that’s what it looks like to my eyes. State officials got to claim some scalps by way of those resignations, while that new local health board got to keep the local peace by announcing that considering the fact there were no cases of the disease in Georgetown, no one would be arrested going forward for not being vaccinated.

By the end of February, just two cases of smallpox remained in Delaware—and both were well quarantined. The crisis had passed.

The Georgetown Mob in Anti-Vaccination History

But I am feeling a need to add one interesting footnote here. In my searching for information about this incident, I came across a couple of brief references to it in history articles tracing the background of the often-reviled “anti-vaccination” movement here in our modern times. Here is one example of how the events in Georgetown in 1919 get handled in those histories:

“Around the same time, it became apparent that not everyone was comfortable with the practice of vaccination. Whilst, as today, most people saw most vaccines as exceptional success stories there were those who resisted vaccination, especially compulsory vaccination.  In one example of energetic opposition to mandatory inoculation in the US, an armed mob led by a retired army lieutenant ran health officers out of Georgetown, Delaware.”

This strikes me as pretty unfair, based on my review of twenty or so contemporary accounts of that smallpox Christmas in Sussex County. A lot of local folks did take exception to the vaccination order, but the situation doesn’t read to me at like this was some bunch of anti-science neanderthals. If I could play defense attorney, here are a few points I would make:

• Many residents remained convinced that the disease at hand was chickenpox, not smallpox. A group of private citizens, in fact, brought in their own outside expert to try and prove those suspicions true.

• Whether by accident or incompetence, the state health officials who put the outbreak at 20 cases in the early days had seriously underestimated the problem. As it turned out, there were 10 times that many cases. A mistake like right out of the gate doesn’t exactly generate lasting trust in the public mind.

• While smallpox vaccine in various forms had been around for more than a century, the treatment still had a dicey reputation at this point in its development—and for good reason. It failed sometimes, due to improper storage and preparation. When improperly prepared, it sometimes transmitted other infections, including tetanus, syphilis, and tuberculosis. These problems with the vaccine wouldn’t be solved until later in the 20th century.

• If you were living in a place like Georgetown on the outskirts of the “safety belt,” where no one had seen any cases of smallpox anywhere near their town, such risks must have loomed quite a bit larger in your mind than they would have if you lived in disease-ridden Millsboro.

• To make matters worse, it seems that some state health officials acted like jerks, refusing to cut anyone any slack, no matter how genuine the complications in life that led them to delay vaccination.

• Those same state health officials apparently never told anyone that by law, the state of Delaware was supposed to pay medical bills associated with the vaccination order. This bit of news seems to have spread like wildfire in the run-up to the “riot,” with lots of talk in the air about how poor families had to skimp on Christmas to pay for vaccinations that by law were supposed to be provided by the state.

• Here in our modern times, we have grown accustomed to things like required school-age vaccinations, but a century ago many civil-libertarian types regarded such orders as an overly authoritarian intrusion into the private sphere of a family’s medical decisions, especially given the very real risks associated with the much-less-than-perfect vaccine concoctions that were in use back then. In both Europe and a number of states in this country, the earliest laws requiring certain vaccinations were almost immediately repealed in the face of vociferous protests that were not based in a neanderthal crowd, but from across the political spectrum.

OK, the defense rests. The larger story of smallpox has a happy ending of course. Long an endemic disease in almost every part of the world, smallpox killed an estimated 300 million people in the 20th century alone. Imperfect though they were, the early vaccines made a dent and helped put the disease on its heels. Safer and more effective vaccine strategies in place by the mid-20th century killed the killer off altogether. By 1980, the disease had been eradicated from every corner of the world, so there should be no worries about smallpox complicating our Christmas festivities here in the 21st century.

–posted by Jim Duffy on Dec. 11, 2019. Copyright Secrets of the Eastern Shore and Whimbrel Creations, LLC. All rights reserved.