Home / Way Back Machine / Celebrating the End of Slavery in a Black Church, 1864: ‘You belong to nobody but de Lord now.”

The way slaves in Maryland gained their freedom was a little bit different. The Emancipation Proclamation issued by Abraham Lincoln in 1863 applied only in Confederate states, not in the three Union states where slavery remained legal, even while the Civil War raged.

It was up to Marylanders to end slavery on their own. In October 1864–22 months after Lincoln’s proclamation–the state’s voters approved a new state constitution that outlawed bondage at last. In his 1883 book, Methodism of the Peninsula, the white preacher Robert W. Todd described how blacks on the Eastern Shore greeted the dawn of freedom.

“On the 29th day of [October 1864], Governor Bradford issued his proclamation declaring the new Constitution ratified by the people, to take effect on the first day of November. … With the midnight advent of that beautiful, frosty November morning, the shackles fell from the hands of all Maryland’s bondsmen; and one hundred thousand new-made freemen walked forth into the blessings and responsibilities of personal and civil liberty.

‘The Year of Jubilee is Come”

“… [E]verywhere throughout the State on the night of the 31st of October, the freedmen assembled in their humble places of worship, or in their ‘quarters’ and cabins; and signaled the coming of their glorious year of jubilee with appropriate, grateful, glowing watch-night services. Sermons and addresses were delivered, prayers offered, and holy songs were wafted forth on the still midnight air, until the incense of glad thanksgiving filled Heaven, and a tempest of praise swept the new, free State of Maryland.

‘One picture will serve as an illustration; but the reader must remember it was duplicated in a thousand places that joyous night.

‘The scene was a newly dedicated chapel on the Eastern Shore. About 9 o’clock, on the night above indicated, the last slave having finished his last task, the colored people of the neighborhood began to assemble at the place of worship; and by 10 o’clock, almost the entire negro population of all that region was crowded into the chapel, and gathered at the door and windows in eager, expectant squads.

“‘Uncle Jack,’ a patriarchal local preacher, of snowy head and most reverend mien, arose and announced from memory the hymn, beginning:

“‘Blow ye the trumpet, blow
The gladly, solemn sound
[Let all nations know,
To earth’s remotest bound:
The year of jubilee is come …]’ 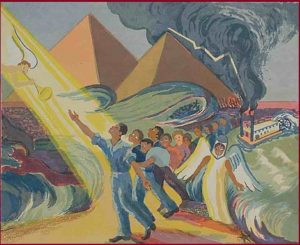 “[This] was sung as only three hundred pairs of African lungs could sing it under the inspiration of “de year [of] Jubilee ” so soon to dawn. Then Uncle Jack prayed and praised and shouted by turns, until his voice was lost amid the hurricane of responsive exclamations that shook the temple.

“At the conclusion of his glowing invocation, the old preacher said: ‘Now den, chil’n, let’s all dat loves de Lord, an’ thanks him fo’ de [coming of] freedom, [re]main on [our] knees, an’ be still; an’ let de heart say its thanksgivin’, jest in a little whisper, so nobody but de blessed Jesus kin hear.’

“For a little while the dropping of a pin might have been heard; then there followed a faint whisper, gradually increasing, and, at length, broken by sobs and smothered exclamations; until, finally, a ‘great and exceeding weight of glory’ settled down like Pentecost upon the assembly.

“Being present with a few sympathizing white spectators, [this] writer was invited to address the audience, [and] he congratulated the freedmen upon the prospect before them. …

“You belong to nobody but de Lord now.” 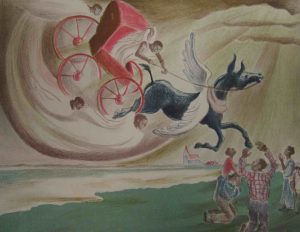 “Uncle Jack then added a few words …, concluding as follows: “I tells ye folks, dis [is] a great day. I neber [expected] to know how a free nigger felt till I got de kingdom an’ de crown up yonder. But … in a few mo’ [minutes], dis ole slave’ll be a free man. I feels it in my bones, an’ chil’n, [I’m a going] to shout!”

“… He suited the action to the word, and leaped for very gladness. Then, as the watch indicated the hour of midnight, all heads were bowed in the solemn consecration of their new life of freedom to the service of Him who had … broken their fetters.

And sing they did! It was like the voice of the winds through field and forest, mingling with the chime of falling waters. Soothing cadences, swelling harmonies, gusts of praise and cyclones of “Hosanna in the highest” went rolling out from the little chapel, and floated off to hill and dale on the still, sweet breath of that November morning.

–posted by Jim Duffy on Jan. 31, 2021 for Secrets of the Eastern Shore/Whimbrel Creations LLC.

• The full title of Rev. Todd’s book is Methodism of the peninsula, or, Sketches of notable characters and events in the history of Methodism in the Maryland and Delaware peninsula. Good used bookstores should be able to help you find it. There is info about it here, too.

• Interestingly, this Rev. Todd was the same man who founded Rehoboth Beach, Del. as a destination for religious gatherings. You can read a little bit of that history here.

• The images here are by Ruth Starr Rose, a Talbot County painter whose work focused on the culture and lives of her African-American neighbors. She had a special interest in the spiritual heritage of the community, as you can see. Learn more about Ruth Starr Rose and her work here.