By Helen HutchinsonOctober 15, 2022No Comments

Have you ever seen a movie that started out in spectacular fashion only to falter and end up a bore of a letdown? That’s how I felt after digging around in search of the story behind this headline above a 1932 newspaper story: “$30,000 in Rum Seized After Gun Battle.” The shootout was set on Fenwick Island, Del.

The backdrop had the ingredients of an A+ gangland thriller.

• It’s Prohibition time. New York gangsters are afoot in slower, lower Delaware. State police bigwigs are itching to crack down on smuggling along their coastline.

• A bootlegger under custody in Dover spills the beans during interrogation about plans by big-city mobsters to run a big shipment of contraband through Fenwick.

• That bootlegger says he doesn’t know the date of the operation, so state police ask the Coast Guard station on Fenwick to partner up and be extra vigilant with beach patrols.

The Dark and Stormy Night

This leads straight into the wee hours of Monday, Oct. 3. This is how a Wilmington Evening Journal reporter described the atmosphere: “dramatic, as if specially ordered by Hollywood.” Storm clouds filled the post-midnight skies, but rain didn’t come. Instead, the angry heavens dropped bolt after bolt of dry lightning. With the exception of intermittent flashes from the Fenwick Island Lighthouse, this strobe-light show was the only thing illuminating the beach. The wind was up, and the seas were choppy.

It’s hard to imagine now, but there was nothing much on Fenwick Island in the early 1930s. This was the last of our modern-day beach resorts to take shape. Accessibly only via a rickety 200-foot-long drawbridge, the place was most all marshland and beach. The smattering of flimsy summer “cottages” had been built mostly by “squatters” who had no legal claim to the land but figured that no one would care in such a remote area. Otherwise, civilization on Fenwick amounted to that lighthouse, the Coast Guard station, some old camp meeting grounds, and a ramshackle hotel that served the camp-meeting faithful in the summer and hunters in the winter. 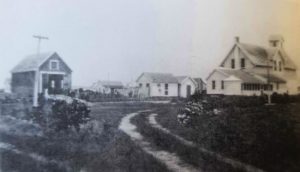 Neither group was in session on that October night—the island was deserted. Or so everyone thought, until a patrolling Coast Guardsman with the last name of Gibbs spied a wagon rolling across the lightning-streaked beach. He set off an alarm that soon reached colleagues in Bethany Beach, Ocean City, and the Isle of Wight. Word spread to the state police soon enough.

The first thing those cops did was raise the drawbridge to try and trap all the bootleggers on the island. Then they headed for the beach, where a pair of little dories were visible, along with a much larger “mother ship” out in deeper water, faintly visible during momentary lightning flashes. One of those dories had already landed—the cops had those guys dead to rights. The other dory was just pulling into shore. The two men aboard that one tried to spin around, rowing furiously into the choppy seas. Unable to make progress, they both jumped overboard and set out to swim out to the mother ship.

The guardsmen opened fire, and that “changed their intentions and the … men came ashore.” The guardsmen must have had a bullhorn or a radio, because newspaper reports say they gave that mother ship orders to stay put. Instead, the crew fired up engines and made a run for it. The guardsmen and the cops “then turned loose a barrage of shot from their Springfield rifles,” splattering “the side of the vessel.” Alas, “she succeeded in reaching the open sea.”

Investigators followed the various runs of cart tracks leading from the beach up onto the island. That led them to the empty hotel, where “cases of liquor” were “piled high” both inside and out. There were more than 200 cases in all. Investigators valued the cargo at $30,000, the equivalent in today’s dollars of$650,000. Among the brand names on the bottles were Canadian favorites “Old Crow” and “Golden Wedding.” 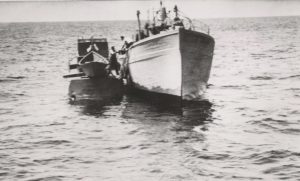 Alcohol getting loaded onto a dory in Prohibition times

Five New Yorkers were arrested, including a few stragglers found here and there on the island. A couple of those men were nabbed in ignominious fashion. Fleeing around the back of the hotel in pitch blackness, they “ran into a barbed wire fence, a bad thing to run into at night.” A judge set the New Yorkers’ bail at $2,500 apiece.

Interrogation sessions led to the naming of other names. Eight Delmarva locals were soon rounded up, mostly at their homes in the hours that followed. In case any of you modern-day locals are curious to check up on your grandfathers and great uncles, newspapers back then listed six of those names: Grover C. Bradley of Greenwood, Del., William A. Hickman of Selbyville, Del., Harry M. Bunting and his son Harold of Ocean View, Del., and Franklin P. Morris and William E. Gray of Bishopville, Md. Bail was set at $1,000 for the Delmarva men.

The story was a big national deal at first, landing in papers all over the country. One wag dubbed it “The Battle of Fenwick Island” and placed that battle in the context of imminent big news in the larger war against smugglers. Two other busts had been made in Delaware in recent weeks. The Fenwick cache ranked as “one of the largest hauls” of liquor seized in the area. Surely, this marked the start of a big, brilliant offensive against the forces of intoxicating evil.

The Anticlimax, with Quiz Question 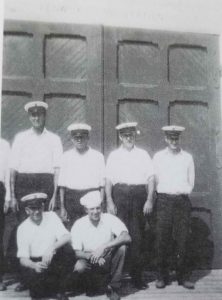 Eh, not so much. The story turned out more like one of those dry lightning flashes, a brief bolt of excitement. The best way to think about the one interesting that happened during the weeks and months that followed is by taking a quiz. Put yourself in the shoes of those local men who got arrested during “The Battle of Fenwick Island.”

Those men faced a choice:

• plead guilty and hopefully get a lesser sentence

• plead not guilty in hopes of getting off scot-free, at the risk of a harsher sentence

Would you have played it safe? Or are you a gambler at heart? Everyone knew the truth of the affair back then, and that truth remains obvious today. No one, local or New Yorker, had any reason to be out on deserted Fenwick Island in the post-midnight hours of that dark and stormy night. They were all there to take part in an illegal smuggling operation. Even if everyone knows you’re guilty, 100 percent, do you still roll the dice?

One man had the case against him dropped, so it was 12 men who appeared in court the following January instead of 13. Six of them played it safe, pleading guilty. guilty. The men who pleaded guilty were fined between $100 and $300, a good chunk of money for most local families back then. It’s about two grand in today’s dollars. The guilty men didn’t get jail time, but only because they’d spent time behind bars while awaiting trial.

Six men rolled the dice and pleaded innocent. The gamblers got lucky that day. The judge turned out to be a stickler for technicalities. He bought into defense arguments about how none of the men had actually been caught in the act of smuggling. When they ran into that barbed wire fence, they didn’t have any liquor on them. In fact, no one was arrested anywhere near the 200-plus cases of liquor at the hotel. The judge seemed fond of other questions raised by the defense, too. Could information gathered during interrogations be used at trial, even if defense lawyers never got a chance to cross-examine those witnesses? 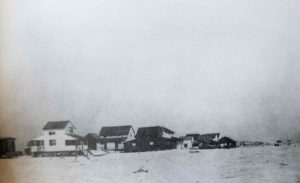 The judge’s bottom line: “The evidence failed to connect the men with the liquor seized.”

See what I mean about that movie starting out so strong and then petering out? In its brief initial flash, the Battle of Fenwick Island seemed a big, exciting turn in the cops-and-robbers war over liquor smuggling. Surely, this would be a turning point? Surely, it would lead to some of the biggest names in the New York City mafia. In the end, nope. That dark and stormy night ended in a few small fines and a few innocent verdicts, that’s all. The case was as quiet as a smuggler-free night out on Fenwick Island.

–written by Jim Duffy and posted by Claudia Colaprete in August 2022 for Whimbrel Creations LLC/Secrets of the Eastern Shore. All rights reserved.

• NOTE #1: I have a whole book that’s full of fun stories from Delmarva days gone by. The title is You Wouldn’t Believe! 44 Strange and Wondrous Delmarva Tales. More info here.

• NOTE #2: The photo up top here of a rumrunner and dory in the 1930s is not specific to our area. As far I can tell, the location of that photo is unknown. It’s in the collection of the U.S. Coast Guard. The other photo with boats—showing liquor being offloaded onto a dory—is also not specific to Delmarva and shows an unknown location. It is in the collection of the Smithsonian Institution. The other photos showing scenes from Fenwick Island are from the book Barefoot in Fenwick: Life on the Isle in the 19th and 20th Centuries. It’s quite well done–if you are interested in Fenwick history and lore, you might want it on your shelf.