By Secrets of the Eastern ShoreMay 31, 2021No Comments

Home / Destinations / Shipwreck in Lewes! The DeBraak Goes Down, 1798

This is an excerpt from my book, Eastern Shore Road Trips #2: 26 MORE One-Day Adventures on Delmarva. More info on that here.

Much as you might wish otherwise, you can’t spend every waking moment of your beach getaway sweltering in the sand and splashing in the sea. Sometimes, it rains. Sometimes, you need a break from the baking. The break I have in mind here will take you into the forlorn depths of that sea, by way of the string of museums and historic sites that lie along Route 1 between Lewes, Del. and Ocean City, Md.

In the moment they occur, shipwrecks are tragic affairs, full of desperation and death. But as decades go by and then centuries, these disasters take on a magical aspect. I suspect Hollywood is to blame. Having served up so many sunken-treasure plots filled with scenes of shimmering, submerged beauty, the big screen has trained us to imagine old shipwrecks as otherworldly places where time stands still and artifacts from days gone by are laid out for eternity in a perfect drowned tableau.

The Atlantic coast of Delmarva is thick with shipwreck lore, with the waters around Cape Henlopen at Lewes being especially infamous in this regard. Lewes was quite the commercial crossroads during parts of the 1700s, as vessels from Europe, the West Indies, and other far-flung locales stopped by or passed through on their way into the Delaware Bay and up to Philadelphia.

At this cape, which juts up from the mainland like a crooked right index finger, those vessels needed to navigate perilously close to shoals so dangerous that they relied on expert local “pilots” to take over the helm and steer them clear of danger. That’s what Andrew Allen was up to when he climbed aboard the British sloop of war DeBraak on May 25, 1798. On an ordinary ship with an ordinary captain, Allen’s piloting gig that day might have turned out to be a routine affair, never mentioned in history books.

But there was nothing ordinary about that day. The story of the DeBraak is the focus of exhibit materials and artifacts on display at the Zwaanendael Museum on the outskirts of downtown Lewes. During warmer months, the Delaware Division of Historical and Cultural Affairs offers a lecture/tour combo that begins at Zwaanendael and then gives curious onlookers a chance to get up close and personal with a massive chunk of the DeBraak’s hull, which spent nearly two centuries in the depths before being raised from the bottom of the sea in a salvage operation so slipshod that it inspired a new federal law designed to protect wreck sites (more on that in the Way Back Machine section at the end of this chapter).

DeBraak is Dutch for “The Beagle.” Built in Holland in 1781 as a single-masted “cutter,” she served the Dutch for 14 years, at which point she had the misfortune to be in an English port when war broke out between the two countries. The British navy seized DeBraak, then overhauled her from prow to stern, adding a second mast to turn her into a square-rigged sloop of war and installing an array of then-newfangled “carronade” guns—short, stubby affairs that were usually fired at point-blank range to rain death on the decks of an enemy vessel in advance of boarding. 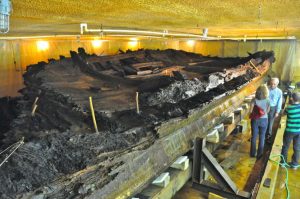 What’s left of the hull of the DeBraak today.

That second mast proved problematic. While working the English Channel in 1797, the DeBraak lost a main-mast in a storm. Her captain, James Drew, later complained in a report to his bosses that the reconfigured boat was “overmasted” and susceptible to gathering in more wind than she could handle.

Drew had a checkered naval career. As a young British lieutenant, he had served at the Battle of Bunker Hill early in the Revolutionary War. A post-battle investigative report from a committee headed by future President John Adams fingered Drew as one of the guilty parties in unspeakable atrocities committed in the aftermath of one skirmish.

Drew, after walking for some time over the bodies of the dead, with great fortitude, went up to one of our wounded Men, and very deliberately shot him through the Head. … In a day or two after, Drew went upon the Hill again and opened the dirt that was thrown over [the body of American patriot Dr. Joseph] Warren, spit in his Face jump’d on his Stomach and at last cut off his Head.

A little while after that, Drew won a promotion to the command of a big ship, but he lasted only two years in that gig before getting demoted to a smaller vessel. Historians do not seem to know the reason he fell into disfavor, but he remained stuck in the lower ranks of naval commanders for the rest of his long career. The DeBraak was tiny by the standards of the British navy. She had 16 guns; an average-size warship had 74.

There are signs in the historical record that Drew could be a prideful, cantankerous man. He became obsessed over the years with winning his first-ever “prize,” the term used to describe enemy ships captured at sea. The booty commandeered from such vessels got divvied up among officers and crew, so prizes led to both personal riches and professional acclaim.

Storm Clouds at the Cape

In 1798, the DeBraak was ordered to sail across the Atlantic as an armed guard for a convoy of merchant ships, which were at risk in those days from both pirates and the French navy. Drew’s orders specified that he stick as close as possible to the convoy, but early on he and the DeBraak went gallivanting off, presumably in pursuit of that elusive prize he craved. For 10 long weeks, the DeBraak was nowhere to be seen. When she finally re-emerged to meet up with the convoy off of Cape Henlopen, she had a Spanish prize in hand.

On that fateful day, May 25, Drew may have been over-celebrating this turn of events. That local pilot, Andrew Allen, later described the captain as “in a hilarious mood” and said that Drew had clearly been drinking when he came up to meet Allen, and that he headed back below decks to drink some more afterward.

Allen spied threatening clouds on the horizon. He told the crew to take down some of the DeBraak’s sails as a precautionary measure. But when Drew reappeared on deck, he was furious to find a stranger ordering his men about. He ordered the sails back up. Then he barked at Allen:

Allen never got a chance to steer the bottom of the DeBraak clear of those dangerous shoals. The storm rolled in, carrying a devastating and “sudden flaw of the wind” that knocked DeBraak over on her side—she went all the way under in a matter of minutes. Was that wicked piece of weather alone to blame? Did that retrofitted second mast Drew had complained about play a role? There is no telling now.

Allen was among the thirtysome survivors. James Drew and 46 others lost their lives. A number of DeBraak victims are believed to be buried under the parking lot outside the Cape May-Lewes Ferry. More DeBraak victims are likely buried somewhere near a basketball court at Cape Henlopen State Park.

Captain Drew rests in a nobler spot, in a vault under St. Peter’s Episcopal Church in Lewes. A monument to the captain stands in the adjacent graveyard. If you visit his grave, you will be right on the main downtown drag of Lewes, which is chock full of interesting shops and restaurants (see Chapter 18).

–posted by Jim Duffy on May 31, 2021 for Secrets of the Eastern Shore/Whimbrel Creations, LLC. All rights reserved.

• The chapter in Eastern Shore Road Trips #2 that this excerpt comes from is titled “The Shipwrecks Tour.” It includes half a dozen stops along the run from up in Lewes, Del. to down in Ocean City, Md. It also includes a postscript section about the centuries-long saga of various folks who have hunted for the “treasure” that local legend says was aboard the DeBraak when she went down. More info on my books here.

• Here is the website and Facebook page for the Zwaaendael Museum in Lewes, which has lots of DeBraak artifacts on display offers frequent talks and tours on that topic. The painting up top here that’s behind the headline is by the artist Peggy Kane–it’s in the Zwaanendael collection.

• Thank you for spending some time with this story! If you are interested in more along these lines, sign up for the Month of Fundays newsletter, which includes links to my latest stories and Jill Jasuta’s latest photos, plus the best fun events and happenings coming up on the Delmarva Peninsula. Sign-up links are at the bottom left of most every page on this site. Thanks, too, for supporting Secrets of the Eastern Shore by checking out the greeting cards, photo prints, and other items available in the Shore Store.