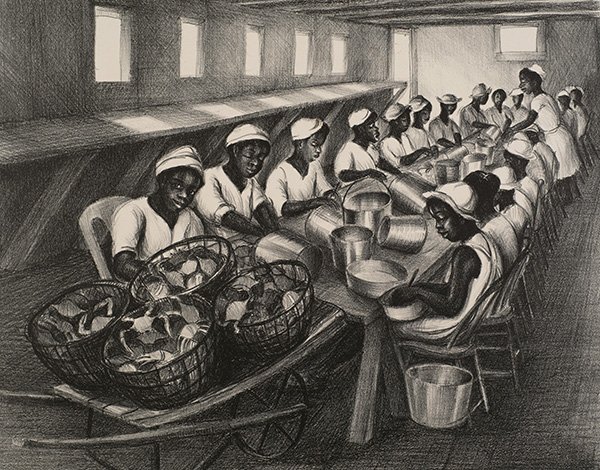 The story of Ruth Starr Rose is full of bold and interesting turns. Born in the Midwest in 1887, she moved to the Eastern Shore at twentyish years old when her parents bought a dilapidated wreck of a mansion called Hope House in Talbot County. The place was chock full of history—members of the Lloyd and Tilghman families had called it home in the 1700s—but by the time the Roses arrived in 1907 it was falling apart and open to the elements.

Ruth’s mother, May, joked early on that her husband had gone out and bought an estate that amounted to one solid staircase, the rest of it junk. The Roses are the reason Hope House is still standing today—they brought in top area craftsmen and apparently paid uncommon attention to historic and architectural detail in bringing the place back to life.

Rose’s family background was quite cultured. Her father was a bigwig in the timber industry. Her mother wrote a two-volume book about Caribbean gardens. She had an uncle who was an accomplished archaeologist. Ruth herself went to college at Vassar.

What she did in the years that followed was take a longstanding family interest in far-away cultures and focus it on a culture close to home on the Eastern Shore, painting scenes from the daily lives of black folks. That made her a very unusual artist at the time. Some of the people who didn’t quite know what to make of Rose ended up dismissing her as a “white socialite” lightweight.

A slew of Rose paintings are on exhibit now in Baltimore at the Reginald F. Lewis Museum. The show is up through April 3, 2016. After that, smaller versions of the show are slated to travel to the Armory in Easton (April 29 to June 19, 2016, details here) and St. John’s College in Annapolis. (Please note: The exhibits referred to in this post were up in 2016 and are all now closed.)

Hope House lies about a mile from another old plantation, Wye House, which is where the famed writer and abolitionist Frederick Douglass spent some of his early years in slavery. A pair of nearby towns, Unionville and Copperville, are thick with black history. It was life in those towns that Rose loved to paint.

The image up top here is a portrait she did of crabpickers at work. But the scope of her work ventured far outside the bounds of such oft-celebrated pieces of Eastern Shore culture. She painted young musicians, duck hunters, and community elders, among others. She did so in a style of formal portraiture that imbued her subjects with a level of dignity and emotional depth that was not always afforded to black subjects back then. 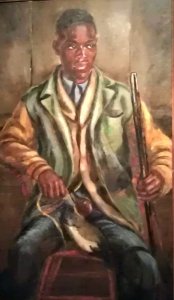 The curator of the Lewis museum show, Oxford resident Barbara Paca, has been working on this project for more than 10 years. She has described the portrait above and on the right here of Anna May Moaney as a “black Mona Lisa.”

In making my way through the exhibit, the portrait that struck me the most was the one shown here of duck hunter Bernard Moaney. A portrait of guitarist Clarence DeShields is quite interesting as well. The exhibit’s wall info identifies DeShields as the man who taught Rose about black spirituals, which would become a huge focus for Rose as her art progressed.

There is a 1951 picture in the exhibit called “This Train Is Bound for Glory.” The wall sign says it was inspired by the Moaney Quartet, a local group from Copperville who would use their voices during performances to mimic the rumbling of a train while singers moved from the front to the back of the church with a theatrical mix of shouting, stomping, and shuffling.

There is lots more great stuff to see here. There is a fun lithograph of kids on the merry-go-round at the Firemen’s Carnival in St. Michaels. There are sweet portraits of neighborhood children—my favorite was “Ruth and Pauline at Breakfast.” A series of different versions of a painting called “Swing Low Sweet Chariot” had me pretty much spellbound. 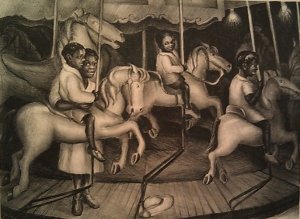 Rose had quite a bit of success in her lifetime. She had lots of solo exhibits, and her work appeared in shared shows alongside quite a few famous artists. A number of her prints and paintings ended up in the collections of prestigious museums (though for the most part they seem to have been shown rarely, if at all, in more recent times). The famous Howard University art historian James Amos Porter praised the visual portrayal of black Americans in Rose’s work as “probably the most comprehensive and probably the most sympathetic … yet to appear in the United States.” 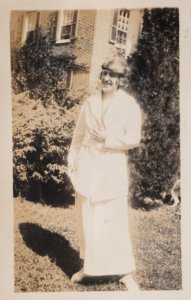 When it came to the black lives she painted, Rose was anything but a disinterested socialite. She was a longtime member of the DeShields United Methodist Church in Copperville. She taught Sunday school there, in fact. At least one newspaper article claims that Rose may well have been the first white artist in history to get a commission to do work in a black church when the congregation at DeShields hired her to do a gigantic fresco called “Pharaoh’s Army Got Drownded.”

The piece has been restored for the exhibit. In a radio interview, Copperville native and genealogist Jeffrey Moaney recalls how in his younger years “Pharaoh’s Army Got Drownded” was behind the pulpit, serving every Sunday as a dramatic backdrop for sermons. It was flanked by red velvet curtains, as he recalls it. A cross hung off to one side. 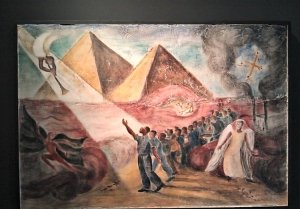 “I believe it was religion that brought Black Americans through their suffering,” Ruth Starr Rose once said. “If I could only convey to white people this sense that the power of God is really present here for us, people of all colors, then I’ll feel my mission is accomplished.”

Rose reportedly was quite the outdoors lover in her day, especially when it came to sailing and horseback riding. She spent many of her winters in New York City, studying with a famous group called the Art Students League.

One article I reviewed in reading up on Rose says that a treasure trove of her sketches, notes, and studies nearly disappeared in the years after her death in 1965. It was a great nephew, Nathan Kernan, who discovered them recently in the possession of a doorman in a New York City apartment building where the family apparently has connections dating back to Rose’s time. 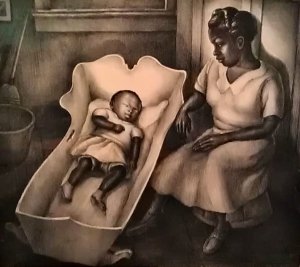 The story of Rose’s work disappeared locally as well. Moaney, who has been researching the history of a family whose members are featured in a number of Rose’s paintings, said he and his relatives had no idea such paintings existed until they were contacted by the folks putting together this exhibit.

Rose’s notes and correspondence add some interesting sidelights at the exhibit. If you go, keep your eye out for the invitation to “A Sacred Outing” held at Hope House on June 22, 1941, and sponsored by DeShields UMC. It was a day of spiritual music, with more than 50 singers performing. At the bottom of the invite is a note warning all comers about the composition of the guest list: “It is the special request of Mrs. Rose that both races attend this outing.”

The one quote from Rose that seems to be used more than any other to sum up the way she regarded her life’s work is this one: “I want my prints to stand as an expression of universal brotherhood.” 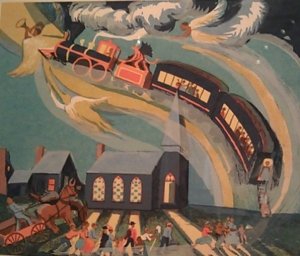 This Train Is Bound for Glory

But there is another Rose quote that I would like to share here in closing. It’s about black church music: These “are deeply religious songs,” Rose said. “Right now in little remote churches all over the south, quartets are singing for the people–not for radio fame, but for the simple Christian duty of helping souls to find heaven. These groups of singers are in deadly earnest and full of religious zeal. They come out of the wheat fields and tomato patches, right from the threshing, the crabhouse, oyster shucking, to sing for their own people. Very many of these quartets cannot read a note of music, yet [they are] so phenomenal in their musical sense that they make an orchestral harmony with savage, haunting undertones out of a simple song. The singing of these black Americans is one of the wonders of the New World.” 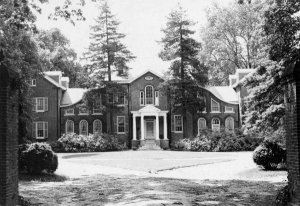 • The Ruth Starr Rose exhibit was on display in Baltimore, Easton, and Salisbury in 2016. All three exhibits are no longer up.

• Also, for those of you interested in a more detailed history of the Hope House, here is the link to the mansion’s listing on the National Register.