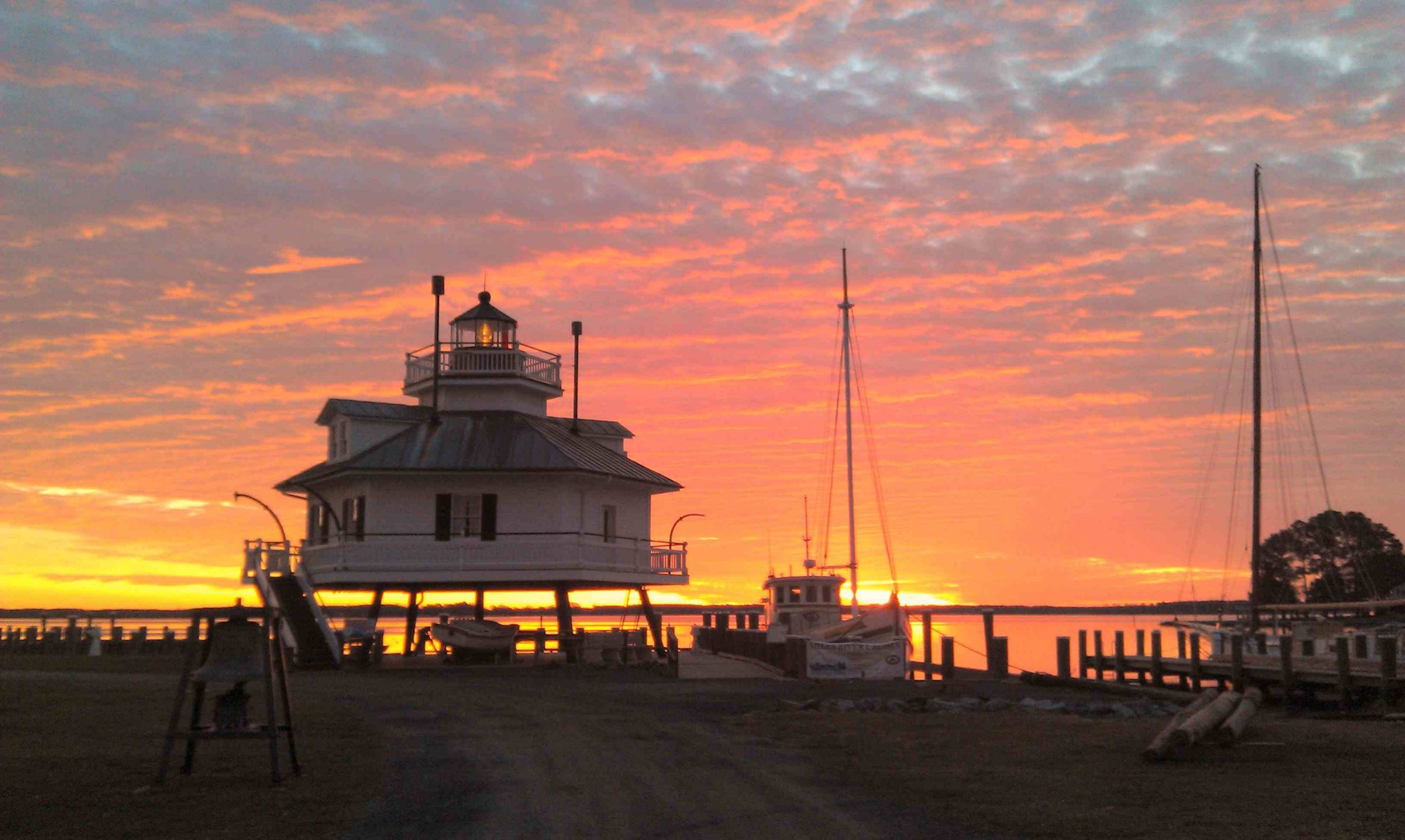 This is a preview from the forthcoming book, “Eastern Shore Road Trips: 25 One-Day Adventures on Delmarva.” Sign up for the list up top here and I will keep you up to date on when it’s finally ready to go. Every once in a while, the right people happen to be in the right town at the right time to do the right thing. So it was with St. Michaels in the mid-1960s.

In hindsight, it’s easy to recognize that time period as a gigantic pivot point in the history of the Eastern Shore. The Chesapeake Bay Bridge opened in 1964. Ferryboats were starting to drop like flies. The sailing fleet was disappearing, too—the last of the bugeyes went into retirement around then, and skipjacks were getting to be few and far between.

At the dawn of the 1960s, the Miles River waterfront was pretty much what it had been for the previous two centuries, a gritty and hardscrabble place full of working-class families and people toiling in old-school crabpicking shacks, oyster-shucking houses, tomato canneries, and shipyards.

But by the middle of the decade there were ominous signs for the future of that old way. Savvy businessman Elwood Jewett saw the writing on the wall–he sold his waterfront crab-picking plant in 1965. The new owner would fail to make a go of it and shut the place down in short order. Another old standby, the oyster-shucking house owned by Edward Morris, looked to be on its last legs as well. In fact, by the early 1970s, every single piece of what historians now refer to as the “working waterfront” in St. Michaels would be closed up.

Similar upheavals were under way in towns up and down the Shore and over in southern Delaware. But it was only here in St. Michaels that a group of people had the foresight to get together and do something big in response. They couldn’t turn back the hands of time, obviously. Nor could they stop the march of progress.

But they could make sure that old days and the old ways of the Eastern Shore were remembered forever. They launched the Chesapeake Bay Maritime Museum, which began life as a rinky-dink smattering of memorabilia in one old building and now occupies a sprawling 18-acre campus with a dozen exhibit buildings and 85 sailing vessels, 11 of them forming a gorgeous “floating fleet” of old skipjacks, bugeyes, dovetails, buyboats, and other only-in-the-Bay vessels.

Today, admission to the museum is good for revisits through two consecutive days, and it’s quite possible that you will end up wanting to come back on day two. In the endless parade of rave reviews the Museum gets on TripAdvisor, quite a few are full of laments about not having enough time to do the place justice. If you don’t want to make that mistake, set aside at least a full afternoon. And plan your meals accordingly—there is no restaurant or snack bar right on campus.

For me, the coolest thing about the Chesapeake Bay Maritime Museum is the way the stories it has to tell end up layered one atop another. How deep in the story you might want to go is a question that’s up to the individual visitor.

Take just one example, the Hooper Straight Lighthouse. Today, it stands on Navy Point as the signature visual element of the museum campus. Between 1877—its light first came on that year on October 15—and 1965, it stood out in the Bay, helping boats navigate their way through a passage that Captain John Smith had dubbed “Limbo Straights” because of its navigational uncertainties.

Keepers lived out there in the middle of Bay until 1954, collecting their drinking and bathing and cooking water via a rooftop gutter system and receiving grocery deliveries by water once a week. That sort of life-on-a-lighthouse material is on level one at the museum—visitors are welcome to climb the sea hatch, tend the lens, and stand watch on the lookout. The museum even has a program where you stay overnight and sleep where the keepers used to sleep.

Then there is a second level of interest, which revolves around social attitudes about history and how they change over time. This is where some interesting surprises start to pop up. Today, old lighthouses like Hooper Strait tend to make most people go weak at the knees. They look to us like beautiful, priceless remnants of times gone by.

This is not a case of same as it ever was. Back in the mid-1960s Hooper Strait was seen as a worthless piece of junk. Once the Coast Guard put the light on autopilot in 1954, the actual lighthouse became a liability. It was just a magnet for vandals and a sinkhole of maintenance costs. In 1965, the Coast Guard won approval to have it demolished.

Here’s the surprising thing: It seems that no one really cared, outside of those right-place-right-time folks in St. Michaels. They bought the lighthouse from a demolition contractor for all of $1,000. Then, they cobbled together the mix of cash and in-kind donations they needed to barge the 42-ton lighthouse up the Miles River, a journey of 60 miles.

In hindsight, it’s clear that this was step one in the process of transforming old Chesapeake lighthouses from pieces of junk into priceless artifacts. In the years that followed, folks over in Solomons launched a successful effort to save the Drum Point Lighthouse. Then came the rescue of the Seven-Foot Knoll Lighthouse in Baltimore. Then came another, and another after that, right up until today.

The third level to the story of the Hooper Strait Lighthouse is a bit of a rabbit hole. It will be visible only in your mind’s eye, because there is nothing left of the old Coulbourne & Jewett crab-picking plant that used to stand in the exact same spot where the lighthouse stands today.

The firm was founded in 1903 by a trio of investors led by Frederick Jewett, the son of a veteran who had served with the U.S. Colored Troops in the Civil War. The Jewetts lived in Crisfield, and Frederick shuttled quite often between there and St. Michaels, a journey that, ironically enough, involved sailing straight past the Hooper Strait Lighthouse on countless occasions.

The company focused on oysters and herring at first. Crabmeat didn’t really become popular on the Eastern Shore until after the oyster fishery started to show early signs of collapse. But Coulbourne & Jewett jumped right on that crab bandwagon. In fact, it was Frederick Jewett who came up with the crabmeat classification system still in use today—backfin, special, regular, claw, and lump.

Frederick’s son, Elwood Jewett, who famously wore a white suit to work at the plant every day, claimed that this was the only company in Maryland history to pack a million pounds of crabmeat for each of five consecutive years, 1935-1940. Around then and in the years that followed, Coulbourne & Jewett crabmeat was getting shipped to St. Louis, Chicago, and Canada. The black-owned packinghouse ranked for a long time as the largest employer in St. Michaels, and its closing in the mid-1960s ended up being a key moment in the transition of the town from working-class outpost into the world-class tourist playground we know today.

Do you see how all those layers work? That’s how it’s going to be at just about every turn here at the Chesapeake Bay Maritime Museum. Whether you are learning about the lighthouse or looking over the vessels in the floating fleet or watching woodworkers toil away in the boatyard, the stories will unfold on these multiple levels, and it will be up to you to choose how to respond to that. If you want to stick with the romantic basics of life as a lighthouse keeper, you will be happy as a clam. If you want to dig deep into one or more of the other layers below that surface, then this will be a great starting point.

A few more notes about the museum are in order here. First, kids will love this place. They will get to don the garb of a lighthouse keeper, try their hand at oyster tonging, and watch old-time woodworkers do their thing. The museum even offers fun “activity backpacks” geared for ages 3-6, which need to be reserved in advance.

Second, there will be lots of opportunities to get out on the water in the warmer months. The museum itself offers cruises on the Miles River aboard an old buyboat, the Winnie Estelle. They also offer small-craft rentals of kayaks, rowboats, and sailboats. Nearby Patriot Cruises offer river tours aboard an old paddlewheeler.

Third, be sure to check on the museum’s event schedule in advance of your visit. The biggest annual shindigs here are the Antique & Classic Boat Festival in June, Watermen’s Appreciation Day in August, and Oysterfest in October. But the museum also serves up a constant array of interesting lectures, classes, and smaller affairs as well.

A trivia tidbit: When you walk through the “At Play on the Bay” exhibit and admire the way they re-created an old country store, you will hear a soundtrack running that’s full of watermen trading jokes and telling stories. At one point in the story on the recording, someone new comes through the door and you can hear the slamming of a screen door. That is my Chesapeake Bay Maritime Museum brush with greatness—I was a magazine writer visiting as they put that exhibit together, and they put me in charge of slamming that screen door. Yes, that involved a real squeaky old door and actual slamming.