Home / From the Books / ROAD TRIPS 2 EXCERPT: False Starts in the “First Town”

Lewes is the Goldilocks of Delmarva beach resorts, perfect for people worried on one hand that places like Rehoboth Beach and Ocean City will be too crowded, but afraid on the other that places like Assateague Island won’t offer enough in the way of creature comforts.

There is one big stretch of beach right in town and another just outside. If they feel too crowded, you’re just a short drive from much more isolated stretches of sand. The downtown has a small-town scale, but you will still be able to find a good vegan meal and a first-rate toy store. And even if it does turn out in the end that Lewes is too small for you, Rehoboth Beach is within pedaling distance, and storied Cape May is a sweet ferry ride away on the New Jersey side.

What’s in a name? That question will pop up time and again around Lewes. The second English adventurer to arrive here, Samuel Argall, christened the bay in honor of his sponsor, Sir Thomas West, aka Lord de la Warre. When Dutchman Cornelius Jacobsz Mey visited in 1614, he named both Cape Mey and Cape Cornelius (which has since washed away) in honor of himself. Cape Hinlopen pays homage to Mey’s business partner, Thijmen Jacobsz Hinlopen.

This last christening caused a bunch of confusion. Mey applied the Hinlopen name to a spit of land farther south, at Fenwick Island. Somehow or another the moniker migrated north over the centuries, creating a bevy of mix-ups over which cape was the site of this, that, or another event. 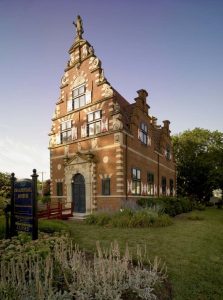 The Zwaanendael Museum tells the story of Lewes’s Dutch roots

This Cape Henlopen is definitely where the Dutch put up a fort in 1631, however. This fort is how Lewes earned its nickname, “The First Town in the First State,” though the story of that settlement amounts to a disastrous false start. Those pioneers decorated their fort in dramatic fashion, adorning its front gate with a patriotic image of the sword-wielding, tongue-wagging “red lion, rampant.”

A seemingly minor incident early on there ballooned into a full-fledged catastrophe for the place these settlers called Zwaanendael, or “swan valley.” A visiting Indian took away a piece of tin while visiting the fort, apparently wanting to use this exotic-to-him object as part of a homemade tobacco pipe. But the Dutch were attached to that particular piece of tin—it had the word “Holland” on it, apparently—and they let the Indians know of their displeasure.

The Indians responded by having the “thief” executed. There are a couple of versions of what happened next. In one, this thief turned out to be a beloved tribal bigwig whose family avenged his death by massacring every settler in sight. In another, the Indians returned to the fort carrying the severed head of the culprit. They may have meant this as a gesture of goodwill, but in a bit of cross-cultural miscommunication, it shocked and angered the Dutch, setting off a run of events that came to the same sad ending, with every Dutch settler dead and Zwaanendael up in flames.

For understandable reasons, new colonists stayed away from Lewes in the years that followed, heading instead to another Dutch stronghold, New Amsterdam, site of the future New York City. A smattering of settlers finally decided to ignore the Zwaanendael jinx in the late 1650s. They didn’t build a town or anything, but they rechristened the place “Hoerenkill,” which translates from the Dutch as “Harlot’s River.” Some historians speculate that this unsavory moniker—later, when the English came along, it would actually turn into “Whorekill”—may have roots in a cultural tradition that had local Indians “sharing” their women with settlers in rather freewheeling fashion.

No such unsavory activity surrounded the second full-fledged town that popped up in 1663, when the Dutch awarded a batch of land here to a rag-tag group of Mennonites led by Pieter Cornelis Plockhoy. Plockhoy was a 17th-century hippie, basically. His dream was to find a place where he and his followers could live in a blissful state of classless equality:

separate from other men, where we may with less impediment or hindrance love one another, and mind the wonders of God.

The town worked like a commune: Every resident was required to put in six hours of common-good labor a day, with any and all proceeds from that work divided equally throughout the town. One historian has described Plockhoy as the New World’s first publicist. He churned out a couple of volumes of letters and essays trying to drum up recruits for his utoptian adventure. Some of that writing comes off like laughably overdone travel brochures.

New Netherland is the flower, the noblest of all lands … birds obscure the sky, so numerous in their flight, the animals roam wild … fish swarm in the waters and exclude the light … 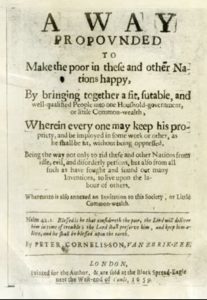 An early publication of one of Plockhoy’s essays

You can still find some of Plockhoy’s writings in an e-book on Amazon with the namby-pamby title, A Society of Mutual Love: The Writings of Pieter Plockhoy. Sample chapter title: “A Way Propounded to Make the Poor in these and Other Nations Happy.”

Alas, lasting happiness was not in cards at Plockhoy’s commune. Just like Zwaanendael before it, the place went up in smoke. It was barely a year old in 1664, when regime change came to Cape Henlopen in the form of English warships sailing into the Delaware Bay. The soldiers on those boats seemed to have left some scattered Dutch settlers in the area alone, but their commander reported that his men destroyed the “Colony of Plockhoy to a nail.”

There is lots more in this Road Trip, including anecdotes and fun facts about the happier days that followed as Lewes grew and evolved into the “saltiest” town in Delaware, chock full of seafaring lore. The itinerary runs through a bunch of museums, parks, and tours–some well known, some not so well known; some right in town, some a little way outside.