By Secrets of the Eastern ShoreMarch 4, 2021No Comments

This is an excerpt from my book, Eastern Shore Road Trips #1: 27 One-Day Adventures on Delmarva. The full trip here is titled “The Road to Rock Hall” and includes stops at Caulk’s Field, Rock Hall, the Eastern Neck National Wildlife Refuge, and other spots.

[Our next stop is] St. Paul’s Episcopal Church, which lies to the left (or southwest) on Sandy Bottom Road. The sweet little vestry house here was built before the Revolution, in 1766. The earliest sections of the main church building go back even further, to 1713. The churchyard covers 19 gorgeous acres, highlighted by one of the Eastern Shore’s most beautiful cemeteries. There are supposedly 40 different species of trees here—until recently, a 400-year-old national champion swamp chestnut oak stood among them, but it came down after suffering damage in a storm. The view of a lazy old millpond at the headwaters of West Lang- ford Creek is tranquil as can be.

It is not the sort of place where you would expect to encounter a character like Tallulah Bankhead. A famously outrageous and irreverent actress in the first part of the 20th century, she devoted much of her energy in life to thumbing her nose at anything and everything with an upper-crust air of refinement.

“How do you get laid in this dreadful place?” she famously asked the producer Irving Thalberg after signing on for her first role in a Hollywood film. (Thalberg’s dry reply? “I’m sure you’ll have no problem.”)

Of her decision to sign up for a later picture, Devil and the Deep (1932), Bankhead served up this public confession: “Dahling, the main reason I accepted [the part] was to f— that divine Gary Cooper.”

That is a small sampling of the endless array of off-color quotes from Bankhead that you can find on the internet nowadays. The last time I scanned them it looked to me like the most popular one of the bunch was this: “I’m pure as the driven slush.”

Ironically, Bankhead belonged to the upper crust herself, hailing from an Alabama family prominent in national politics. She first earned fame on the London stage while in her early 20s, and live theater was always her first love. Her best film performance is in Alfred Hitchcock’s Lifeboat.

When she won a big award for that role, her acceptance speech began, “Dahlings, I was wonderful.” 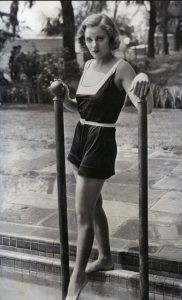 It was family that brought Bankhead to Kent County now and again. She had a sister who lived in Chestertown, and that sister seems to have been the one in charge of everything in the wake of Bankhead’s death in 1968. Legend has it that Tallulah’s last request on her deathbed in a Manhattan hospital was a garbled plea for some bourbon. Visitors to St. Paul’s have been known to bring a little bourbon along when they visit the cemetery here. A pastor at the church told a local newspaper a few years back that staff sometimes finds glasses of the stuff on Bankhead’s grave.

One footnote here before we move on: Chestertown was not Bankhead’s only connection to Delmarva. As her fame for outlandish behavior grew, she developed a loyal following among some circles of gay men. She and her entourage made regular trips to Rehoboth Beach in the 1940s, the period when that town was just starting to develop into a mecca for gay vacationers.

–posted by Jim Duffy on March 4, 2021 for Secrets of the Eastern Shore/Whimbrel Creations LLC. All rights reserved. This is an excerpt from the book, Eastern Shore Road Trips #1: 27 One-Day Adventures on Delmarva. More info about the book is here.