Home / Characters / JOURNEYS: The British Teenager Left Behind to Live with the Indians in 1608

Every chapter in my book, Eastern Shore Road Trips 2: 26 More One-Day Adventures on Delmarva, is a mix of fun places to visit and interesting stories from days gone by. This free excerpt is from one of the road trips set on the Eastern Shore of Virginia–the book also includes lots of trips in Delaware and on Maryland’s Eastern Shore, of course. Thanks for reading!

No one knows the back story on Thomas Savage. Which town in England did he call home? What sort of family was he born into? Why did that family ship him off, all alone, to the New World? All we know for sure is that he was about 13 years old on Jan. 2, 1608 when he stepped off of a boat that brought supplies and a fresh batch of settlers to the fledgling colony of Jamestown, Va.

Young Thomas walked down that plank into a colony teetering on the brink of destruction. Some 100 of the nearly 150 settlers who had landed at Jamestown the previous year were dead. Many fell to disease and starvation. Others were killed by Indians.

What happened to Thomas in this strange New World strikes me as something better fit for a Hollywood coming-of-age movie than the dry history books where I learned about his incredible adventure. The boy was soon assigned to join Captain John Smith and a party of 30 on a diplomatic mission to the village of the most important Indian chief around, Powhatan.

The older white men in that party cut a crazy-sounding deal with the chief. They handed young Thomas Savage over to the Indians, while receiving in return a young Indian boy to take back to Jamestown. It was the first of several such exchanges between natives and newcomers in those years, with the idea apparently being that it would be good if a handful of individuals on each side had a grasp of the language and culture of the other.
That’s food for thought on a three-plus mile drive down the winding, two-lane Savage Neck Road (Route 634) as it runs through the countryside outside of historic Eastville, Va. to a peninsula with the same name as the road. Out here, you will be able to follow a footpath out to a glorious run of sand dunes and beach overlooking the broad Chesapeake Bay.

Across the Great Divide

What went through 13-year-old Thomas Savage’s mind when those older white men walked away, leaving him behind? How wide were his eyes in those first hours, surveying his exotic new surroundings? Did he have any sense for the big picture here, how he might well be the very first white man to live among these natives in this New World? Think about this, too: When is some Hollywood director going to latch onto this concept?
You’ve probably guessed by now that Savage Neck gets its name from the fact that Thomas Savage ended up on the Eastern Shore some years after his teenage adventures. We will see soon enough how that happened, and why. Back in that Indian village, though, the teenager probably got to know the famous Indian princess Pocahontas quite well—she was Powhatan’s daughter, after all.

Another young boy who got sent off to live with the Indians a little bit later in this period reported that he and his compadres were treated reasonably well. They even got to dine with regularity at the chief’s “oune Table mess.” But there were tensions, too. At one point in Thomas’s first year with the Indians, Powhatan exiled the teenager after some negotiations with white men at Jamestown failed to lead to the release of Indian prisoners.

Powhatan soon changed his mind, however. He sent Pocahontas herself off to find Thomas and bring him back into the tribal fold. Later in life, Pocahontas would recall Thomas as someone her father “loved exceedingly.”

Things got dicey again for Savage in 1610, with the outbreak of an Anglo-Powhatan War. That was the first of the innumerable conflicts that unfolded in the centuries that followed, pitting Native American nations against European settlers in the lands that would become the United States. Powhatan nearly wiped out the Jamestown colony in that first conflict, by cutting off all trade and closing off hunting grounds in the midst of drought conditions that had the settlers scrounging for food. 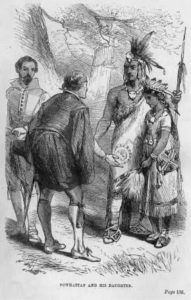 The war was a brutal affair on both sides. Soldiers from Jamestown burned down whole villages and went out of their way to desecrate the sacred graves of dead chiefs. Meanwhile, the Indians tortured prisoners in horrific fashion, including an incident in which the women of one village used mussel shells to slowly skin an English soldier alive.

Unnerved by such atrocities, Thomas Savage decided to skedaddle. He invented a white lie for Powhatan about an errand that needed doing in Jamestown, then took off and didn’t look back. As things turned out, he picked the winning side. Before Powhatan managed to finish off the colony, ships from Europe arrived at Jamestown carrying critical supplies and another fresh batch of settlers.

Gift of the Laughing King

Back with the Europeans, Thomas Savage built a new life for himself. It’s not clear what he did for a living at first, but he got called into duty with some regularity as a translator in talks with various Indian leaders. One such case came in 1621, when he accompanied a Jamestown official on a trading expedition across the Chesapeake Bay to the Eastern Shore.

By all indications, Savage got along famously with an Indian chief there. In some books and on some historical signage, this chief is identified as Debedeavon, but that seems to be a case of mistaken identity—Debedeavon didn’t come along until many years later. Historians now think this chief was named Esmy Shichans, though he is more famously known by a nickname, “The Laughing King.” No one knows for sure how he got this moniker, but it’s fun to imagine the look of his face in any case.

The Laughing King made a gift to Savage of the large tract of land now known as Savage Neck. Thomas and his wife, Hannah, were probably living here full time with their infant son, John, by 1625. Savage did pretty well for himself in the fur-trading business. He did a lot of farming as well—an early census record says he had a house, a barn, a boat, and two servants at “Savages Choice.”

Alas, Savage died young, in 1633. His demise is shrouded in the same sort of mystery that surrounds his earliest years back in England, but what we do know is that the Savage family survived and thrived through the centuries, leading right up to the present. Some of Savage’s descendants still live in this area. Historians regard them as the oldest colonial family whose descendants can be traced fully through the historical record.

Over the Savage Dunes

Today, most people who make the ride out through Savage’s old stomping grounds do so to visit the 300-acre Savage Neck Dunes Natural Area Preserve. A small, well-marked parking area is where you can set off on a sweet walk of about a mile through forests and alongside a stream. Nature-oriented markers serve up a good introduction to the succession of ecological zones that unfold at the edge of the bay here. 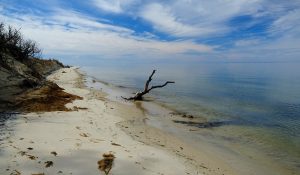 In the end, the dirt underfoot turns to sand, and the trail rises up and over the dunes, ending in a glorious stretch of beach that’s often quite isolated. The last time I visited, I wandered that beach for a couple of hours and enjoyed a lunch I’d brought along while perched atop a piece of driftwood. As I looked out over the bay, my mind kept picturing the vessel that brought Thomas Savage across from Jamestown in 1621 for his meeting with jovial Esmy Shichans.

• This excursion in Eastern Shore Road Trips: 26 MORE One-Day Adventures on Delmarva also includes a stroll through historic Eastville, Va., as well as a fun historical nugget from the old court records there–about a rather tempestuous marriage that led the husband and wife into court where they eventually reached this agreement in writing: ‘One Shall Not Call the Other Any Vile Names’

• If you are interested in Eastern Shore Road Trips #2–the book where this excerpt comes from–here again is that link.

–posted by Jim Duffy on May 3, 2020 for Secrets of the Eastern Shore/Whimbrel Creations LLC. All rights reserved.