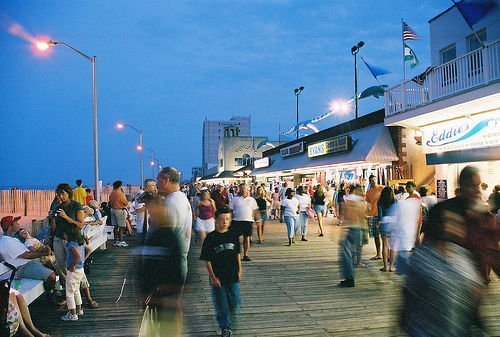 Rehoboth: The Beach Town with Something for Everyone

Home / Road Trips / Rehoboth: The Beach Town with Something for Everyone

As beach towns go, Rehoboth Beach tends to be a shape shifter, ready at every turn to morph into the destination any one visitor might be looking for. If you have the kids in tow and you’re looking for beach fries, boardwalk arcades, and mini-golf, you’ll find them in abundance. If you’re an outdoors lover coming in search of bike paths, paddling expeditions, and abundant green spaces, you’ll find those, too.

If you’re a shopaholic, Rehoboth has you covered—and that’s true whether you prefer the concrete jungle outlet malls or quaint downtown boutiques. If you like vacations that serve up generous doses of gourmet dining and performing arts, Rehoboth will fit that bill better than any other town on the Delmarva Peninsula. And if you’ve also heard that Rehoboth is a hugely popular vacation destination among the region’s gay population, well, you heard right about that, too.

The story of Rehoboth Beach begins, quite literally, with a minister’s dream. In the early 1870s, Rev. Robert Todd of Wilmington, Del., endured a bout of spiritual and physical exhaustion. After a recuperative trip to the New Jersey shore worked wonders for him, Todd returned to the pulpit and announced that “The sea hath spoken.” Translation: He planned to open a Methodist resort on the Delaware shore to serve others in need of the oceanfront’s recuperative powers.

The perfect location appeared to him in his sleep, and that vision eventually led Rev. Todd to a spot he dubbed “Henlopen City.” The resort that went up there consisted of a bunch of one-room wooden buildings called “tents” set up around a central tabernacle. Henlopen City lasted less than a decade. One interesting remnant of those days remains—an old tent house at 17 Christian Street, where the Anna Hazzard Museum is located. As of this writing in the summer of 2015, the museum is offering regular opportunities in season to stop in and chat with a pair of period re-enactors, the husband-and-wife team of Robert and Patricia Truitt.

Today, Rehoboth is home to 1,300 or so year-round residents. In the summer months, however, its population swells to more than 25,000. Despite the big crowds and frequent parking woes, the town has done a pretty decent job of holding on to its small-town vibe. You won’t find the endless runs of high-rise hotels like Ocean City has. Most of the streetscape still has a Norman Rockwellish feel to it.

The boardwalk at Rehoboth isn’t the longest, but it is first rate. At one point in recent years it was even dubbed the best in the nation by Reader’s Digest magazine. The most popular stop amid all of the traditional junk food, T-shirts, and beachwear shops is Funland, which serves up a mix of midway carnival games and amusement park rides. Brothers Allen and Don Fasnacht bought the place back in 1963, and today it is operated by five Fasnacht children, four grandchildren and three great-grandchildren. Word of advice: Don’t go overboard on the boardwalk fries and ice cream. Of all the beach towns on the Eastern Shore and in Southern Delaware, Rehoboth ranks as the foodie-est of them all. You will definitely want to save room for what the restaurants here have to offer.

One great way to explore your options there is by signing on for “Eating Rehoboth,” a walking tour led by a local insider that includes samples of food and libations from five restaurants, as well as a behind-the-scenes visit to one of downtown’s specialty shops. The lineup of featured restaurants and shops rotates with every tour.

The fortysomething-year-old Blue Moon Rehoboth is a local institution. Housed in an old Sears Craftsman house, it specializes in seafood, steaks, chops, charcuterie, and cheeses. If the timing works out, don’t miss the chance to enjoy Blue Moon’s famous Sunday brunch. Other highly regarded seafood destinations include the Henlopen City Oyster House, whose motto is “We’re serious about oysters;” the sprawling Big Fish Grill, located out on the highway; and Salt Air, which takes the farm-to-table approach.

Rehoboth has more eclectic options as well. The menu at Modern Mixture is a jumble of Mexican and Middle Eastern. Mariachi serves up Spanish, Portuguese, and Cuban dishes. Cafe Azafran specializes in Mediterranean fare. Beer lovers will want to make a pilgrimage to the home of Dogfish Head Brewery, a big player in the birth of the current craft brew craze.

After dinner, dessert lovers might consider steering clear of the traditional beach town ice cream shop in favor of something with a European flair. Last time I looked, a dessert shop was sitting atop the TripAdvisor restaurant ratings for Rehoboth—Nonna Sweet Treats serves up traditional Continental sweets from various countries, including Liege waffles, pizelle, pizza frite, tara luci cookies, and tiramisu. There is also Cafe Papillon, which serves up first-rate French crepes. Rehoboth offers lots of options for working off some of the calories from those restaurants—jogging, strolling, hiking, and cycling among them. In town there is Silver Lake on the south and Lake Gerar Park on the north. Just north of town is Gordon’s Pond, with eight miles of hiking and biking trails. Just north of that is 5,000-acre Cape Henlopen State Park. A little ways south of town is Delaware Seashore State Park, which covers nearly 3,000 acres of ocean and bay waterfront and comes up with some truly creative public programming.

Cyclists will want to find their way to the Junction and Breakwater Trail, which runs mostly off road and connects Rehoboth with nearby Lewes, where another quaint downtown awaits for an afternoon’s exploration.

Because of its popularity with political bigwigs in Washington, DC, Rehoboth has long been known as “America’s Summer Capital.” It has won a slew of awards on top of that best-boardwalk-in-the-land thing—it has also been ranked among the nation’s best places to retire and best coastal small towns.

The biggest events of the year here are the weekend-long Sea Witch Festival at Halloween time, with hundreds of separate contests, parades, and events, along with an annual film festival and an annual jazz festival. This is also home to one of the Shore’s few professional theater companies, Clear Space.

Rehoboth’s penchant for delivering arts and culture amenities above and beyond the call of beach-town duty is linked with its history as a mecca for the upscale gay communities of nearby cities. That history dates to the 1940s at least, when the flamboyant actress Tallulah Bankhead began bringing her rather diverse crowd of friends into town. The gay scene went fully public in the 1970s with the opening of two gay dance clubs, The Boathouse and the Renegade.

Some tension arose in the 1990s with the launching of a campaign to “Keep Rehoboth a Family Town,” which some regarded as an anti-gay slogan. But in the years that followed the community seems to have put in the work needed to get past such misunderstandings. The gayest stretch of beach these days is at the south end of the boardwalk, an area known as Poodle Beach.

The downtown shopping scene in Rehoboth generally beats out that of other nearby beach towns. While strolling and browsing, keep an eye out for Browseabout Books, an old-school independent bookshop. Foodies will want to stop in Olive Orchard Tasting Room, which has specialty oils and vinegars. And everyone should stop in the Kevin Fleming Gallery, dedicated to the work of a stupendous local photographer who has worked all over the world.

• You can find info about the Anna Hazzard House at the website of the Rehoboth Beach Museum. And here is the info you need to sign on for an Eating Rehoboth tour.

• Here is the website of the photographer Kevin Fleming, whose work is frequently featured on the Secrets Facebook page. It has the addresses of his physical stores, or you can just shop online.