By Secrets of the Eastern ShoreMay 31, 2021No Comments

Home / Way Back Machine / Traveling to Bethany Beach in its Early Days Was a Long, Bumpy, and Stinky Nightmare

Mom, Dad, are we there yet? Was that classic children’s whine a thing in the early 1900s? If it was … oh, those poor parents who decided to take their kids on vacation to Bethany Beach, Del. Everyone complains nowadays about summertime traffic tie-ups on the way to the beach. But those delays are nothing compared with the trials and tribulations endured by Bethany-bound travelers at the turn of the 20th century.

The Plague of Neurasthenia

Bethany Beach was brand new back then, and its back story is worth a brief detour here. The world was moving so fast in those days! Think trains, steamboats, and telegraph lines. It was a time, too, when rural folks were moving in droves to big cities. Big buildings, noisy factories, crowded streets. Did I mention electricity?

People felt exhausted, overwhelmed, and depressed. Doctors found a diagnosis for the phenomenon. The theory behind neurasthenia was that human beings weren’t meant to live at the breakneck pace of the “modern” world of the late 1800s and early 1900s. It was more than our central nervous systems could handle.

Some doctors recommended weeks of bed rest. Others sent patients to sanatorium-like facilities. Another recommendation was rest and relaxation, especially amid the healthy air of the oceanfront.

This is how churches got into the beach-resort business. They were looking to help the faithful navigate the neurasthenic overwhelm in their high-speed lives. Oceanfront destinations already existed, of course, but churches wanted the faithful to head to destinations from alcohol, frivolity, and sin.

“a haven of rest for quiet people [desiring] wholesome recreation [in a place] without the dissipation found at other more fashionable watering places.”

The church resorts were meant to be places of renewal, reconnecting people with their true selves. Outside of the Christian angle, it wasn’t so different from today’s meditation and yoga studios.

Rehoboth Beach was an early example. In the 1870s, Rev. Robert Todd of Wilmington, Del., endured a bout of spiritual and physical exhaustion. After a recuperative trip to the New Jersey shore worked wonders for him, Todd returned to the pulpit and announced plans to open a Methodist resort on the Delaware shore.

The Church of Christ got into the act three decades later, when its Christian Missionary Society decided to develop a destination in Bethany Beach. The church sold lots and made promises, but then ran into a rough patch. The economy went south in 1901. Banks grew hesitant to loan money. Construction delays popped up. Some of the work that did get done was shoddy. 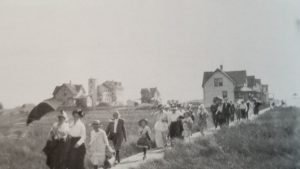 The Christian Missionary Society was about to bail on the project when a group of faithful up in Pittsburgh decided that the project deserved a second chance. A group of savvy businessmen called the “Pittsburgh Six” took over. Construction was soon back on track soon enough. Wells were dug. A tabernacle went up. A boardwalk opened.

Before long, Bethany Beach was planning religious-revival events and putting on Chautauqua-like presentations. The also started marketing the place aggressively. This is what Church of Christ bigwig F.D. Power promised would-be travelers in a promotional brochure quoted in the book, Bethany Beach Memoirs: A Long Look Back:

“There could not be a more picturesque route or a shorter one to the ocean. By B&O to Baltimore: thence by the fine steamer Princess Anne across the Chesapeake for third miles … under the wooded shores of the Isle of Kent to lovely Queenstown, thence for sixty miles by Queen Anne Railroad … to the ancient city of Lewes and the county of Sussex in Delaware; thence through kaleidoscopic scenery of lovely waters, smiling shores, fertile fields, woods, streams, and lily-starred lakes …”

Preachers can tell whoppers, too. In reality, getting to Bethany Beach was a nightmarish ordeal. In the 1970s, history buffs there conducted interviews with community elders whose family roots went back to those early Pittsburgh families, including Marjorie Errett and Katherine Willfrey. The stories they tell in the booklet Bethany Beach, Delaware: A Walk Through History 1901-2014 put to shame any modern-day tales about an hour’s wait at the Chesapeake Bay Bridge or slow going on Coastal Highway.

Errett’s family traveled to the beach every June after school let out. They planned to stay through the summer, so the trip involved a gazillion overstuffed suitcases. Clothes, toys, books, linens—everything. Many other families brought dogs.

The Erretts lived a short train ride from Pittsburgh. Marjorie’s father would hire someone to cart a single oversized trunk to the local station. Otherwise, every family member, no matter how small, had to carry bags on the walk from home to the station. A 30-minute ride on the rails brought them into Pittsburgh, but the train from there to Baltimore left from a different station.

Everyone grabbed those heavy bags and set off on foot again, this time through city streets. Horses and carriages dominated urban transportation in those days. That looks idyllic in weathered old photos, but those photos are rarely detailed enough to show all the horse poop on the ground. Stepping in a pile or two was inevitable. 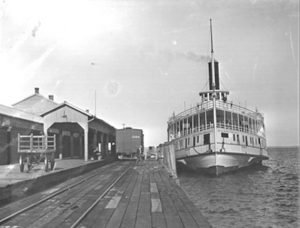 Their arrival in Baltimore after a long train ride through the mountains meant day one of the family endurance test was nearly complete. But first, of course, everyone had to grab those overstuffed suitcases and walk more poop-splotched city streets to a hotel.

The next morning started like a “Groundhog Day,” schlepping bags through city streets. At the steamboat terminal in Baltimore’s Inner Harbor, the Erretts would often meet up with church friends who’d come in by train from the Washington, DC area.

If the weather was good, the three-hour ride across the Chesapeake Bay was a blissful respite amid this traveling ordeal. The scenery was awe-inspiring. Creature comforts abounded. Another bonus awaited at Love Point on Kent Island. There, the railroad line ran right next to the steamship landing, so the carting of bags was minimal.

You might think the railroad trip across the Delmarva countryside would offer another blissful interlude, but no such luck. This was the age of steam-powered locomotives—and this was summertime. There was no air conditioning. The windows were all open. 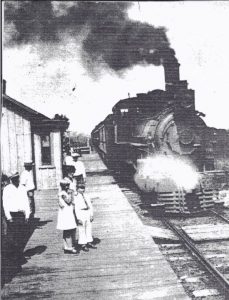 The engine up front belched smoke and soot in abundance. One railroad line across the Eastern Shore at this time was called the Baltimore, Chesapeake and Atlantic—or BCA. Passengers used to joke that the acronym stood for something else—Black Cinders and Ashes.

They inhaled that smoke the whole way. Getting off of the train in Rehoboth Beach, they had to beat their own clothing like a rug and sending puffs of dust and ashes up into the air.

Today, the run from Rehoboth Beach to Bethany Beach amounts to a hop, skip, and jump. But there no bridge across the Indian River Bay in those days. Nor did a railroad line extend across the water. This latter improvement was something the Church of Christ and Pittsburgh Six powers that be worked on like crazy, but they were unable to convince a railroad company to take it on.

And so everyone on the train platform in downtown Rehoboth had to … do nothing for a while. According to Ms. Erret, they had to sit tight until another train arrived from Philadelphia so that more Bethany travelers could join in this last leg of the journey.

Only then did everyone climb up into a “big horse-drawn bus” that then waddled its way up Rehoboth Avenue to a manmade waterway, the Lewes Rehoboth Canal. There they boarded a mini-steamship called the Atlantic (later, another vessel called the Allie May came along) which puttered along the Canal, then through Rehoboth Bay and Indian River Bay before finally winding up White’s Creek to a place called Pennewell’s Landing.

The travelers were still two miles from Bethany Beach. They climbed up into another horse-drawn bus. This last leg of the journey was mostly atop sand and marshland, so it took two excruciating hours. Along the way came endless bone-jarring bumps and thumps that had a way of aggravating the seasickness felt by children fresh from a boat ride. Throughout, sand flies and mosquitoes swarmed over the travelers.

The End of the Ordeal 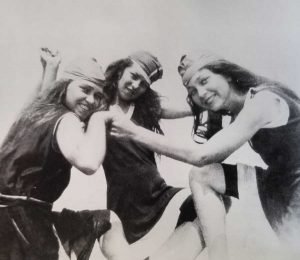 Ms. Errett described the two-day trip as “completely exhausting.” Everyone went straight to bed upon arrival. There, they drifted off to memories of “smoky and dusty trains, squall-tossed boat rides through narrow waterways, wagons lurching through sand and dust, plagues of sand flies and mosquitoes, and seasick children.”

The easing of the nightmarish trip to Bethany Beach happened slowly as the decades went on. In 1910, a new Bethany Beach Loop Canal allowed travelers to bypass that last excruciating horse-drawn bus ride. Instead, the Allie May would drop new arrivals right in the middle of town. In the 1920s, the newly constructed Route 26 (Atlantic Avenue/Garfield Parkway) offered an alternative route to automobile travelers. The first bridge over the Indian River Inlet opened in 1934.

Perhaps I should close by returning to that Church of Christ preacher and his whopper of a travel description full of “smiling shores and lily-starred lakes?” Well, at the end of that wildly inaccurate big of advertising, Rev. Power did make it back into the light of truth. This is final destination he promised:

“… and then the great ocean, with its splendid beach, its surf, its varied scenery, its manifold voices, its majesty and its healing and refreshment.”

–written and posted by Jim Duffy on May 23, 2021 for Secrets of the Eastern Shore/Whimbrel Creations LLC. All rights reserved.

• This is a rough draft for a chapter in an upcoming book that is (very) tentatively titled: “Strange and Wondrous Tales from the Delmarva Peninsula.” You can see the other books in my Secrets of the Eastern Shore series here.

• I will be testing more chapters from this project here on the website. The best way to keep up with them is by signing up for Month of Fundays, a monthly e-newsletter that serves up stories about Delmarva as well as a guide to the best events and happenings of the coming weeks. Scroll to the bottom of most any page on this website to find a subscribe button.

• Among the sources for information and photos for this piece were Bethany Beach Memoirs: A Long Look Back by James D. Meehan; Bethany Beach, Delaware: A Walk Through History 1901-2014 by the Bethany Beach Landowners Association; and Bethany Beach: A Brief History by Michael Morgan.

• Thanks, too, for supporting Secrets of the Eastern Shore by checking out the greeting cards, photo prints, and other items available in the Shore Store.