These images you see in this post are blurry because they’re screenshots from a grainy fortysomething-year-old video, but that video just so happens to be the greatest Eastern Shore footage I have ever seen.

One commenter on the YouTube link posted below says: “This is the best thing I’ve ever found on the internet.” Another: “Greatest YouTube video ever.”

They are not exaggerating. The year was 1980. The place was Cambridge. Gas station attendant and over-the-top colorful Eastern Shore character Danny “Killer” Marsh set out to break the world’s record for eating raw eggs. To become champion, he would need to down 51 raw eggs in 60 minutes. 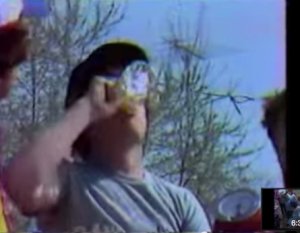 Danny and his pals staged this event outside of a bar called Sportsman’s, and they evidently promoted the heck out of it. Hundreds and hundreds of locals came out to watch the stunt and cheer their hometown Killer on to victory.

A TV news program called Evening Magazine was there, too, and this is the report they aired on the show. The video is 7:42 long, but it’s worth every crazy fun second.

Here is the link to the video. It’s also embedded just below.

PS: If this link is broken or the video taken down at its source, please report that to me in the comments so that I can try and find another version to put up. Thanks.

—Written and posted by Jim Duffy for Secrets of the Eastern Shore/Whimbrel Creations LLC in 2015. Updated March 27, 2021.

• The images here are screenshots from the videos.

• Danny Marsh lives outside of Baltimore these days. He’s a photographer and a big Ravens fan. He comes down to Cambridge now and again to catch up with old friends.

• The way I found this video in the first place is thanks to my friend April Goodman. She posted a question on Facebook one day, asking if anyone else out there remembered the day when she was a little girl that the whole town of Cambridge came out in droves to watch a guy eat raw eggs in a parking lot? Once she started the ball rolling, one thing led to another in the comments. Thanks, April!