Home / Way Back Machine / ODE TO THE STEAMBOATS: ‘When the Bay Boats Blow’

This ode to the steamboat era was written in 1910 by Folger McKinzie (1866-1950), who grew up on the Eastern Shore in Elkton, Md. and became something of an adolescent prodigy. He became editor of the weekly Shore Gazette newspaper in Ocean Grove, N.J. at age 17 and then, at 20, returned to Elkton as assistant editor of the Cecil Whig. While there, he brought Walt Whitman to town for a lecture.

After a stint at a paper in Frederick, Md., McKinzie spent fortysome years at the Baltimore Sun as a reporter, columnist, and “staff poet”—really, they had such a title in the newsroom back then. Widely known as the “Bentztown Bard,” McKinzie published two books of poetry, with countless other bits of his verse appearing in the newspaper over the years.

When the Bay Boats Blow

Hurry up there when the bay boats blow,
Old line steamer or a tug with its tow;
Down by the pierheads, scurrying along—
All aboard the ships for the seas of song:

Ah the happy music
When the bay boats blow
Echoing from Light Street
Soft and low!

Hurry up there when the hoarse horn toots,
Down go the ships to the isle of fruits,
Down go the river boats, swinging from the pier—
Choptank, Nanticoke, the blue Tangier:

Hark the paddles turning,
And the screws churned round—
Isn’t it a beautiful,
A homesick sound!

Hurry up there when the spring sun shines;
All aboard the dock for the Chesapeake lines;
Hoarse note, shrill note, oh, the dreamy way
Down with the steamers to the blue, blue bay:

Rocking in the docks there,
Loading freight the while;
Off with the bow line,
Down the stream we smile! 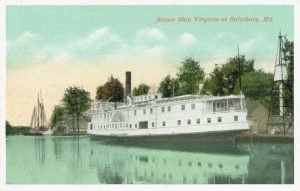 The steamboat Virginia at Salisbury, Md.

Hurry up there if you want to go down,
Out to the dream world far from town;
Claiborne, Tilghman’s, Love Point—sweet
The music of the whistles of the Light Street Fleet

Tickets for Patuxent,
South River, West,
Down go the steamers
On the blue bay’s breast!

Hurry up there if you want to get aboard
For the Land of dream and the garden of the Lord;
Sidewheel, sternwheel, Richmond and away
Up and down the waters of the Chesapeake Bay 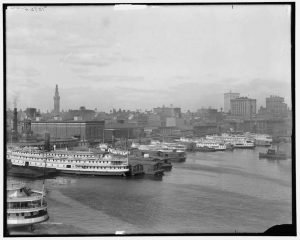 Steamboats in Baltimore Harbor in the early 1900s (Library of Congress)

Oh, the happy-hearted ones,
Leaning on the rail,
Ready when the boat blows
Down the dream to sail

–posted by Jim Duffy on April 1, 2020 for Whimbrel Creations LLC/Secrets of the Eastern Shore

• In the photo up top here, that is Folger McKinzie with his dog on the left. On the right are steamboats docked at the wharf in Denton, Md., on the Choptank River. That photo is from 1910, the same year this poem was written.