QUOTE OF THE DAY: How Royal Oak Became the “Healthiest Place in America”

Home / Way Back Machine / Quote of the Day / QUOTE OF THE DAY: How Royal Oak Became the “Healthiest Place in America”

The writer Dickson J. Preston got to the bottom of this burning question when he put together a brief portrait of the boom times that came to Royal Oak  during the latter part of the 1800s. This is from Preston’s book Talbot County: A History, which was published back in 1983.

Royal Oak, an ancient community, gained momentum when the steamboats and railroads began bringing summer visitors in droves to spend their vacations in Talbot. Half a dozen old homes opened their doors to paying guests. Best known was the Pasadena Inn; it was started in 1901 by Fred Harper who had decided to stay home and build his own “Pasadena” when other family members went West and wrote back glowing reports about the beauties of Pasadena, California.

… At it peak, Royal Oak had other attractions—two saloons to complement its two churches, five stores, two blacksmith shops, a barbershop, and a business which combined the unlikely functions of carriage salesroom and undertaking parlor.

It also had a national reputation as the “healthiest place in America,” although this was unearned if not necessarily undeserved. It resulted from a newspaperman’s idea of a joke. In 1874 the co-editor of the St. Michaels Comet, stuck for something good to say about a piece of Royal Oak property being advertised for sale, wrote, “according to unpublished statistics the health centre of the United States is a circle with Royal Oak as

the centre and a radius of four miles.” 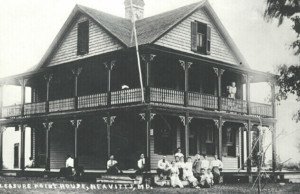 While located in nearby Neavitt, the Pleasure Point House was the sort of place that catered to tourists in Royal Oak as well.

This was pure fiction; no [such] survey had ever been made. But the item was picked up by metropolitan papers and published and republished, embellished and exaggerated throughout the United States for the next twenty years, even appearing in the Manila Times on the Philippine Islands. Finally, in 1899 the hoax was exposed in an article in the Baltimore Sun. Even so many Royal Oak people continued to believe it, taking the view that if it wasn’t true, it ought to be.

The photo up top here is of the Ocean City Flyer rolling through the area around Royal Oak back in the day. Keep scrolling for a few more fun photos. 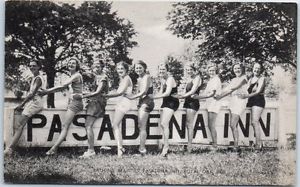 This postcard was a promotional piece for the Pasadena Inn in Royal Oak. The facility is still going today, operating as The Oaks. 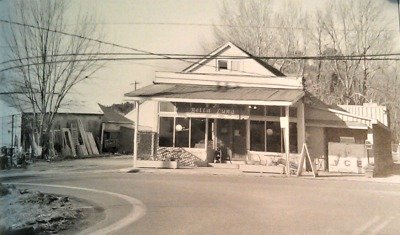 This is a relatively recent photo of the old general store in Royal Oak, but it was there during the town’s heyday. 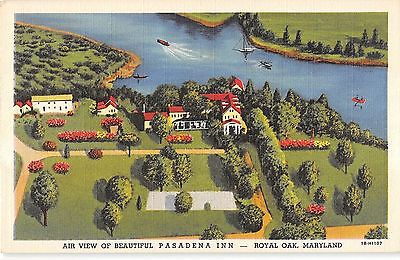 Another promotional postcard from back in the day for The Pasadena Inn. 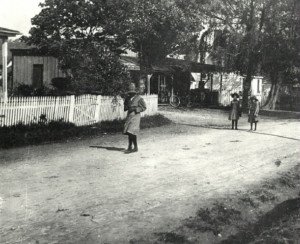