QUOTE OF THE DAY: In an Old Tomato Cannery, “the Satisfication of All Our Work Done Right”

Home / Way Back Machine / Quote of the Day / QUOTE OF THE DAY: In an Old Tomato Cannery, “the Satisfication of All Our Work Done Right”

One winter day a few years back I drove out to St. Michaels, Md. to hear a presentation at the Chesapeake Bay Maritime Museum by a panel of local folks whose families were involved in various old canneries that used to be so central to the economy in the mid-Shore region–and all around the Delmarva Peninsula. One of the presenters passed around a copy of this poem, written during the World War II years by a worker at the old Defender Cannery in Trappe, Md. That presenter said he didn’t know who wrote it.

But that mystery was solved four years after this post went up. In 2022 the Rural Life Museum in Trappe linked to this very post on Facebook and a community member named Cynthia Miles weighed in to solve the mystery. The author of the poem is on the left in the photo below. Her name is Ruth Miller Sullivan, and her descendants are still living in the area. (Here is where you can go to follow the Rural Life Museum’s page.)

Below is the poem. Be sure to keep scrolling past the end. I threw in a bunch of cool old cannery photos down there.

At the Canning House

Red tomatoes a-laying in the pan
Hurry there, my sisters, skin as many as you can
Encased in pasteboard boxes
And loaded on the van

Our F.D.R. has ordered
Many cases for the boys

Soon Talbot-grown tomatoes
Will be among their joys 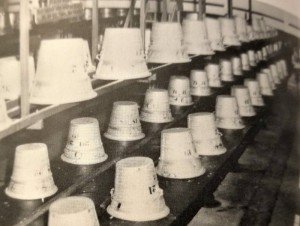 Tomato pails lined up in a cannery in Federalsburg, Maryland 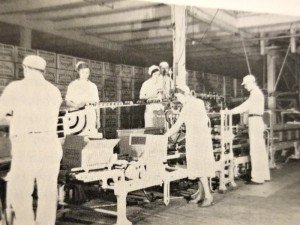 Scene at the Phillips Packing Company in Cambridge, Md. 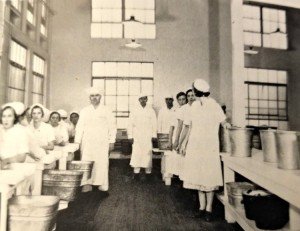 Scene at the Phillips Packing Company in Cambridge, Maryland 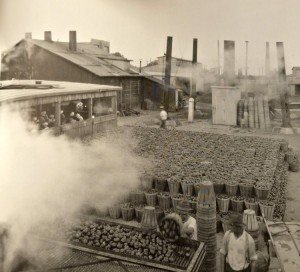 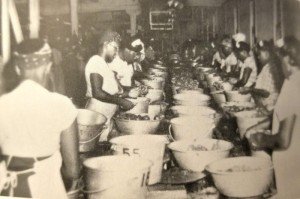