QUOTE OF THE DAY: “The stately looking steamboat … cautiously, almost stealthily edged her way into the locks” of the C&D Canal.

By Secrets of the Eastern ShoreMarch 28, 2020No Comments

Home / Way Back Machine / QUOTE OF THE DAY: “The stately looking steamboat … cautiously, almost stealthily edged her way into the locks” of the C&D Canal.

In 1881, the Wilmington (Del.) Morning News published one writer’s eloquent account of his steamboat journey from the old city of New Castle through the Chesapeake and Delaware Canal and on across the Chesapeake Bay to Baltimore. Here are some highlights:

Steamboats ran on the bays and rivers of Delmarva for a century and a half, from 1813 until 1962. This account of one brief day in that long era appeared in The Wilmington (Del.) Morning News on June 21, 1881:

“To the traveler who is not in a hurry there is a much pleasanter route to Baltimore than by the [railroad].”

The author makes his way to the “ancient town” of New Castle, stops to admire the “new” Knights of Pythias hall, and exchanges a few “pleasant words with the affable postmaster, Mr. Janvier.” Then he boards the iron-hulled steamboat Major Reybold, which soon commences “steaming down the wide-spreading waters of the Delaware.” First stop: Delaware City.

“I landed and was soon seated at supper at Kidd’s Hotel. … As you walk along the streets, … everything is ‘quiet as the grave’ and the people look at you in a sort of startled way as though they suspected you were intent upon breaking in upon the quiet and monotony of their lives.”

He admires a few “handsome dwellings” and remarks upon the “dignified air” of Delaware City.

“There are churches of almost every denomination, and they seem to have had their influence in making the town exceedingly moral and orderly. Anyone desiring to find a quiet retreat where the din and confusion of the world do not enter should make Delaware City his home.”

At 9:30, he boards the “stately-looking steamboat Elizabeth, of the Ericsson line.”

“The boats of this line are built expressly for the canal, and consequently are made narrow in order to pass the locks … The saloons are snug and pleasant, though not large, and when one has ‘turned in’ for the night the motion is so gentle that he has no more difficulty sleeping than though he were in his bed at home. The gates were opened ad noiselessly the boat steamed out in the waters of the canal. There was no sound but the faint puff of the steam and the monotonous drip of the water from the bow.”

The author heads to the upper deck. 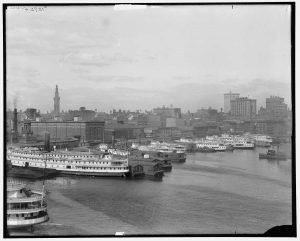 “Looking to the right and left I could see looming up the farm buildings with dot this beautiful country. Everything seemed hushed and sleeping. Now and then some lonely cow would utter her mournful lowing or some ambitious rooster would give vent to a lusty crow.”

“A shrill whistle” signaled the boat’s arrival in St. Georges, where she “cautiously, almost stealthily edged her way into the locks.” Once inside, she waits for the water to rise.

“As the blackened and dripping walls of the lock closed in about the boat my sensation was a peculiar one, and there was a feeling of relief and liberation when the advent of the water caused our boat to gradually rise until we were on a level with the water outside, and when the gates opened and we swung out into freedom again.”

With “another toot of the whistle,” the boat takes off again, passing under bridges at Summit and Bethel en route to Chesapeake City, the end of the canal. From there, Elizabeth headed along Back Creek and then into the Elk River, running down past Turkey Point Light and into the Chesapeake Bay for the last leg of the journey, the cross to Baltimore.

“When I arose in the morning we were at the mouth of the Patapsco. After a very tempting breakfast ‘on board,’ I mounted again to the upper deck and thoroughly enjoyed the ride up the harbor of Baltimore. The breeze was invigorating. I saw the Jersey Boy and the Pilot Boy, two of the old Delaware river steamboats. I recognized Fort McHenry and thought of Key when he wrote the Star Spangled Banner. In imagination I shook hand with the steamer Ida, and beheld with pride the Carolina, for I knew that Delaware workmen had ‘wrought their keels.'”

It was 8 o’clock when the captain cried out “fast,” and I stood for the first time in the city of Baltimore.”

NOTES:
• The article was published in the Morning News on June 21, 1881.
• The photo up top is of the steamship Penn traveling through the canal. I do not have a date for it.
• The photo in the text here shows the Baltimore harbor full of steamboats in the early 20th century. It is in the collection of the Library of Congress.