Quote of the Day: A Shocking Discovery on the Dunes of Fenwick Island, c. 1900

Ruth Watson Lewis grew up in a family that made a special trip every year to a religious “camp meeting” on the Delaware Beach. The reminiscence that follows about going to the Fenwick Island camp meeting as a young girl comes from the book, Barefoot in Fenwick Island: Life on the Isle in the 19th and 20th Centuries. Be sure to stay tuned to the end for the “shocking discovery” promised in the headline.

The horse finally pulls us over the old wood bridge. It always seems to take so long to get to Fenwick. My sister and I are giggling with excitement. We veer to the right side of the lighthouse and swing around the campgrounds. We stop at the makeshift boardwalk and gather up our supplies—everything you need to eat, drink, sleep and live in a bare wooden tent perched on two to three foot pilings—to carry to the cottage.

I always wanted to stay in one of the tents around the tabernacle, to be in the circle of the camp meeting grounds. … But grandfather Adolphus decided to build on the other end of the boardwalk, on the oceanfront, because he came to fish. Eventually a street formed and they named it Lea Avenue.

As kids we played while doing our chores. Scavenging for driftwood for our nightly bonfires became a time of discovery of all beings living on the beach, in the dunes and in the tidal marshes. 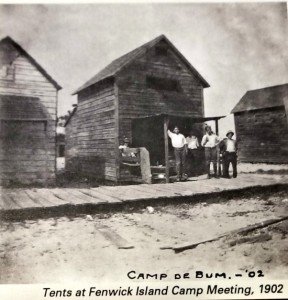 Grandfather loved to walk in the marshes. It was his time and he normally returned with a pail full of oysters, clams, or crabs. We’d sit side by side as he shucked clams, offering me one, then him one. I didn’t like them too much at first, but not wanting to spoil my time with him, I’d slide the salty critter down my throat without chewing. Soon by age 5 or 6, I developed a taste for clams and for pretty much every delicacy from the bay and ocean. … We sang church songs. Women cooked together. The men fished and smoked pipes. In those days we didn’t have many things, the outdoors provided what we needed.

My funniest memory was learning about men’s private parts. At first we didn’t dig privies. Everyone would just do his or her business off in the dunes. You’d see someone walking with some paper in hand; you knew not to go in that direction. But on this day I didn’t see my uncle go off and I was running, following a ghost crab. Up over the dune and the exact second I looked up, there was Uncle Jack standing with his pants around his ankles and in front of my face, his thingy.

It looked so weird that it scared me and I did an about-face and ran straight to grandma who was in front of our tent. I told her what happened and she just quietly said, ‘We don’t talk about that so just forget you saw anything.’ And I have never told anyone this story until now.

Unlike the more famous camp meeting held up the coast at Rehoboth Beach, the Fenwick Island camp meeting was more for local families than for big-city visitors. People flocked there from nearby towns such as Selbyville, Roxana, and Bishopville. The camp ran from the post-Civil War years into the 1930s. Early on, it was held a little ways inland at a location on Big Assawoman Bay. It moved to a spot on the beach in the 1890s.

Barefoot in Fenwick Island was published in 2018. The author credit on the cover goes to Kimberly McCabe Grimes, but the book also reflects the diligent work over the years of an informal group called the Fenwick Island Historical Group. I have really enjoyed paging through the copy I picked up at the Sea Shell City shop in Fenwick, especially the oral history tidbits like this one. The book is also available at the Town Hall in Fenwick, and perhaps other places around town. I don’t believe it is available online as of this writing. The old camp meeting photos here are from the book as well–there is one more great shot below here. 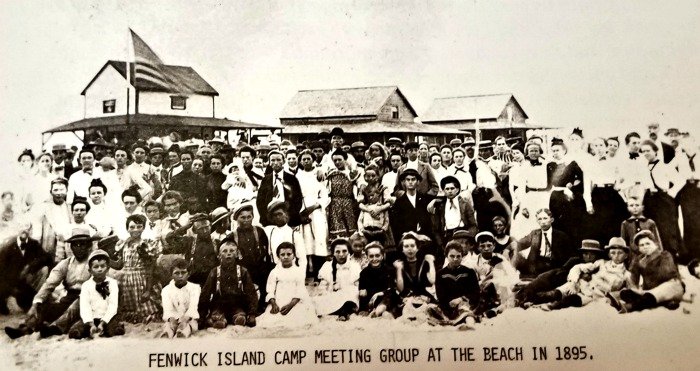