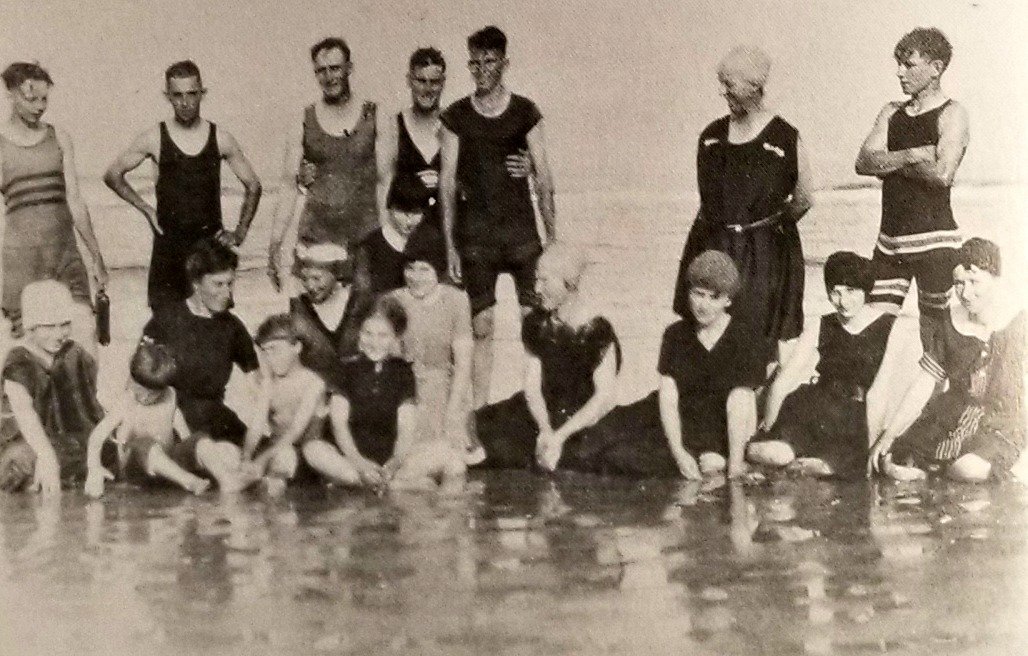 QUOTE OF THE DAY: “That morning, we’d all pile in the workboats and go to Red Hills”

Home / Way Back Machine / Quote of the Day / QUOTE OF THE DAY: “That morning, we’d all pile in the workboats and go to Red Hills”

Back before Chincoteague was a big tourism deal, folks from all over the Eastern Shore and points beyond used to flock to a resort called Red Hills to do their swimming and picnicking. Named for the color of the dirt on tall ridge behind the beach, Red Hills was on the Chincoteague Bay near Sinnockson, a tiny hamlet between Greenbackville and Horntown.

There is still a Red Hills Road there today, but you can’t really get to the beach anymore, from what I understand. It’s on private property, for starters. Plus, it’s a faint shadow of its former self, thanks to damage done by big storms in 1933, 1936, and 1962.

The heyday of Red Hills lasted from the 1880s to the 1930s. There were bathhouses and refreshment stands and sometimes even carnival rides. Here is how one man remembers the community outings that were a ritual of his childhood. The quote is from Voices of the Chincoteague: Memories of Greenbackville and Franklin City.

It felt like the whole town spent the day at Red Hills. The women would cook for days before that. That morning we’d all pile in workboats and go to Red Hills. As soon as we’d get there, the little kids would swim, clam, and play games while the women fussed with the food and each other. The men, and boys who were old enough, took off in the boats again and put out the nets. I felt pretty big for my britches when I got to go with the men!

After a few hours the men would come back with nets full of every kind of fish this Bay holds. They’d dump them out on the beach, clean ‘em, and then cook ‘em over campfires. Lord, we had hardheads, spots, trout, soft crabs, hard crabs, back willies, toad fish, you name it, we had it!

I don’t know which family brought what of the potato salad, carrot salad, cole slaw, Jello salads, applesauce, pickles, homemade rolls, and other fixings. It was just all spread out, and we’d all eat till we were full. After we’d eaten and drunk as much as we could hold, the men would go off to the themselves and do their smoking’ and drinkin’, the women would clean up and then sit around, sometimes singin’ and sometimes tellin’ stories. Teenagers would begin their courtin’, and we little kids would fall asleep.

More than one of us was too full and got sick. Not because of the food, because of the soda pop. We didn’t have soda pop then like you do today, but that was the day we had all we could drink of real bottled soda pop. It was those little Nehi bottles and always grape or orange. Before the men went out to set the nets, they’d fill wash tubs with ice and soda pop and you could drink till it was gone. I remember counting 11 that I drank one year! 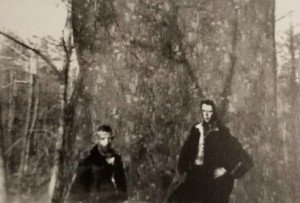 Standing in front of the giant tulip poplar at Red Hills

The authors of the book, Martha A. Burns and Linda S. Hartsock, then make this note: “There used to be a natural wonder nearby—a tulip poplar tree that was dated by a forestry official as being over 450 years old.” Then they continue with another of the many oral history quotes that are sprinkled through the book:

Everybody who went to Red Hills would go see the tree at one time or another. Thirty years ago when the leaves were off, you could see it from all around ‘cause it was so huge. When we were kids, I’d say under 15, it took 12 of us arm-in-arm to reach around the trunk of it. Lot of it has rotten now, she’s now all ‘bout gone. It was unbelievable. Humongous. It was for sure bigger than the Wye Oak that everybody got so excited ‘bout a few years ago.

Here is where you can find Voices of the Chincoteague on Amazon. It should also be available at Sundial Books in Chincoteague and the Book Bin in Onley, though it’s best to check first before making a special trip.

NOTE: I wasn’t able to locate any good photos from Red Hills back in the day. The photo up top here is of a beach outing on Hog Island, Virginia in the early 1900s.